Chillianwala is a very important battle fought on 13th January, 1849. In memory of that victory and to honour their fallen soldiers, British erected an obelisk at the battle field. It is just outside Chillianwala village. Chillianwala is located in Mandi Bahauddin district. About 15 kilometers east of Mandi Bahauddin city. The location of this monument is 32° 39' 44.22" N, 73°  36' 21.60" E. 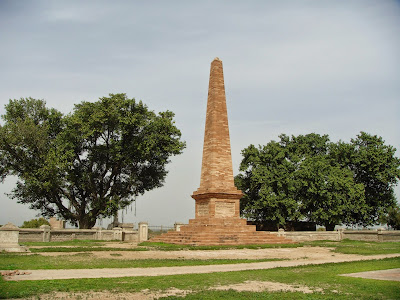 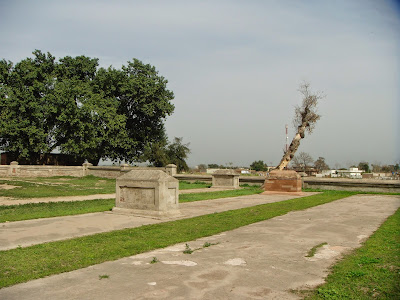 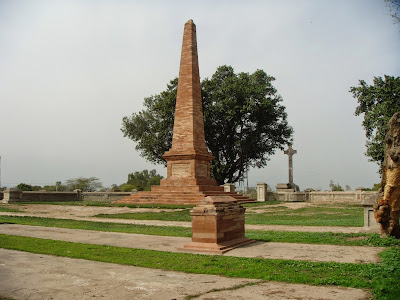 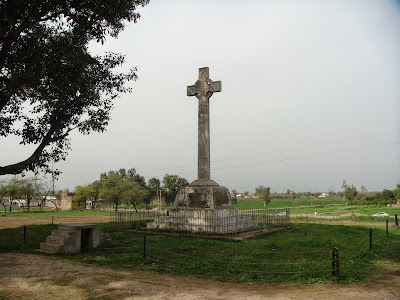 The foundations of this monument were laid by Richard Southwell Bourke, the 6th Earl of Mayo, the Viceroy and Governor General of India, in 1871.

After this battle British annexed Punjab and Khyber Pakhtunkhwa and made it a part of the British India. It was the hardest battle the British had to fought in India. Sikh army not only stopped but repulsed the attack of British Indian army, with terrible losses. However, Sikhs due to their own weak and exhausted army did not make any counter attack and retreated to Gujrat. It is a very important historical place, students of history should visit it.

A few months ago while browsing I came across a website

and discovered a very interesting piece of information about the battle of Chillianwala. Besides giving details of the battle, it mentioned something which I neither read anywhere before, not I was expecting. It was about three small cemeteries, where some of the British soldiers fallen in the battle were buried.

So on the first available opportunity I decided to visit that place again and see those graves by myself. So I was there again, more than 6 years after my first visit on 22.02.2009. There was not much trouble in locating the graves as the writer has given the exact coordinates of all the three small cemeteries. Otherwise, it is not easy task to locate them in the countryside, where most of the people have no idea of the existence of these graves. Just to satisfy my curiosity I asked a group of young women near the first cemetery about the graves, that who was buried there? Most of them were of the opinion that these belonged to Khatris (Hindus). That was interesting as Hindus burn their deads. However, one of them replied correctly and said that Angrez (English) are buried there. In my later interviews a couple of persons made the same reply that the graves were of Khatris. One even said the Gujars to be the occupants.

Now the further details I shall copy from the above mentioned website:

The location of the three mass graves containing about 200 dead of the 24th was unknown for many years until rediscovered in 1993 by Brigadier Ian McLeod, the British Defence Advisor in Pakistan. He had been asked by the Royal Regiment of Wales Museum to provide some advice on the possible commissioning of a painting of the battle. He spotted the three enclosures standing amidst farmland. On a subsequent visit in June 1993 he and I decyphered the remains of an inscription on one of them “In memory of the men of HM 24th Foot who fell around this spot in the battle of Chillianwala on 13th January 1849”.

It was some time later that I discovered a copy of General Sir George MacMunn’s Vignettes from Indian Warswhich contains eight pages (pp. 134-43) on the battle and crucially a map which shows the location of the “three enclosed trench graves”. MacMunn tells the grisly story of their origin. “All night long the Sikhs roamed the deserted battlefield ... massacring any British wounded they could find. Most of the dead were slashed across the mouth and the ghastly grin their faces presented was a horrible sight. Most of the bodies had been stripped and ... many of the stripped bodies seemed to have been dragged through the thorn bushes so much were they torn. An attempt was made to collect the dead at the Chillianwala mound and a great many are buried in the long trenches there. A contemporary account however tells that camels were sent out to collect them and that before long the indecent sight of the corpses lashed on the camels coming into camp was too horrible and demoralising and the remainder were buried out where they fell. This explains these three large nameless graves on the south of the Moong road.” 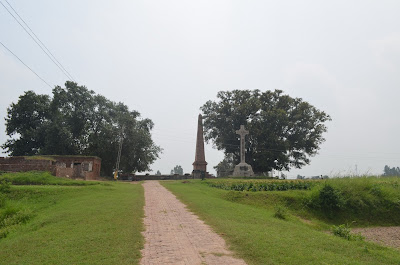 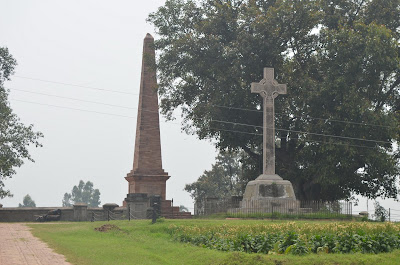 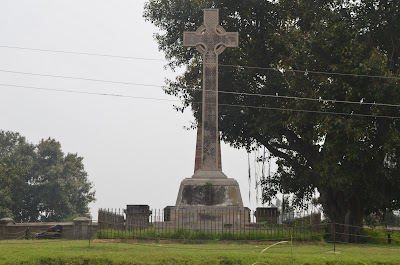 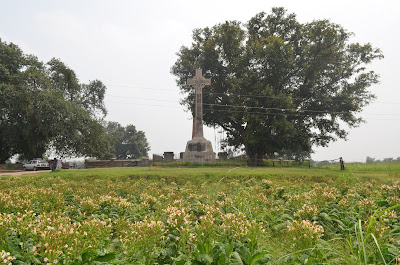 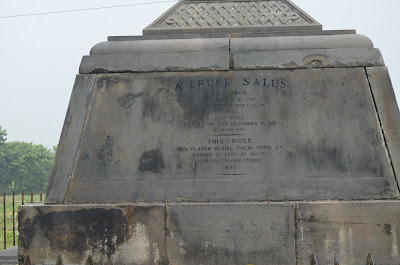 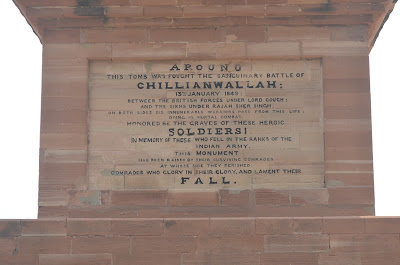 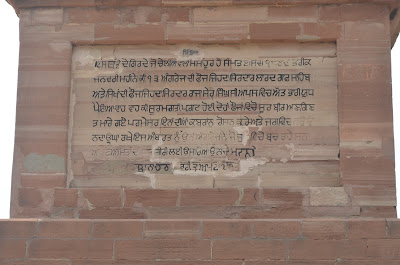 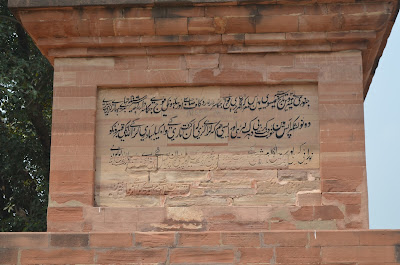 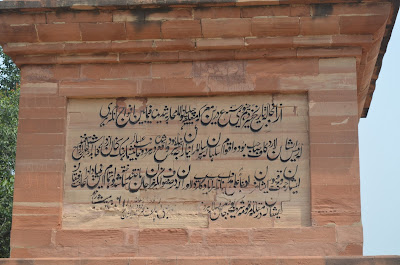 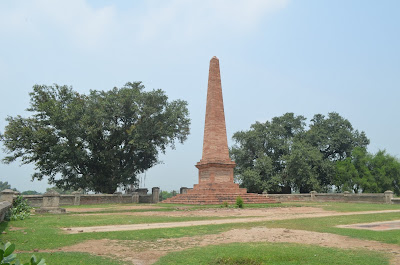 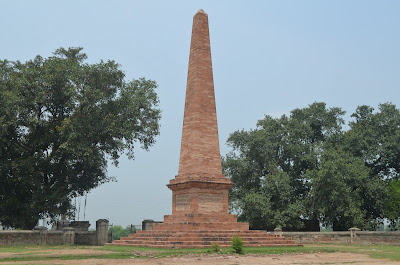 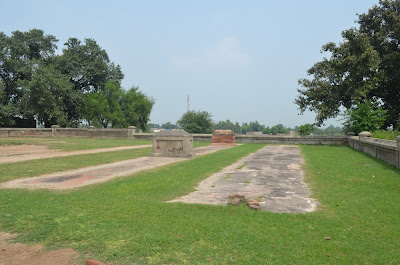 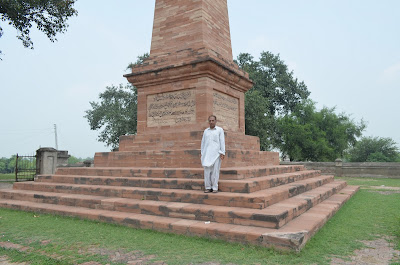 
The condition of these small cemeteries is not good. All the three are just crumbling enclosures of approximately 10 x 10 metres, with one metre high walls. The first cemetery, about 70  metres south of the Chillianwala - Kot Baloch road, is almost covered with thick vegetation and nearly invisible. I could not enter it because of thick vegetation in and around the enclosure. 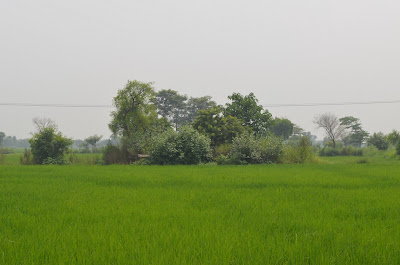 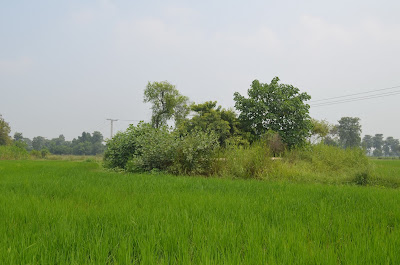 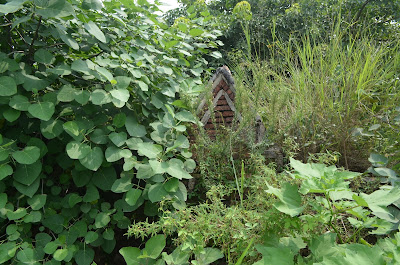 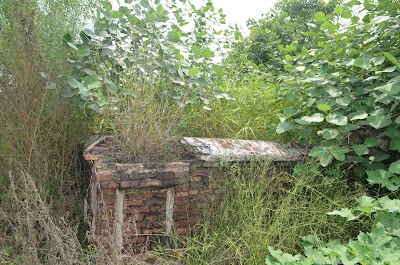 
The second cemetery is right on the same road, approximately 600 m from the first cemetery. Although it is not totally covered with the bushes, nevertheless is in a bad shape. A nearby residence told me that now seldom someone comes to visit this place. Though until a decade ago people occasionally used to come here. Signs of graves type structures are clearly visible here. But it is mostly a heap of bricks. The entrance which is in the north wall, on the road, was closed with bricks a long time ago. On the front wall it was clearly visible that somebody had deliberately vandalized the cement plaque. 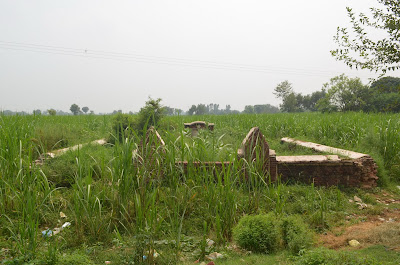 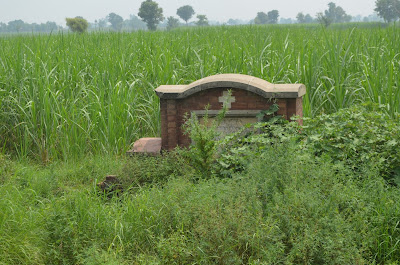 Further 100 metres in the direction of the Kot Baloch is the third and the last cemetery. It is about 50 metres south of the road in the lush green fields. A perfect final resting place. But the walls of the enclosures are almost fallen apart and there is not much left. I am afraid that in a few years all the signs of the cemetery will completely vanish. 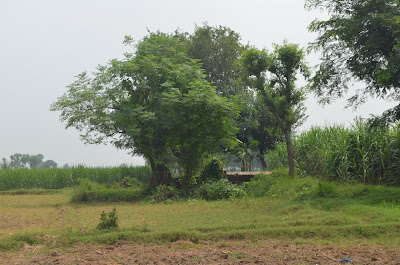 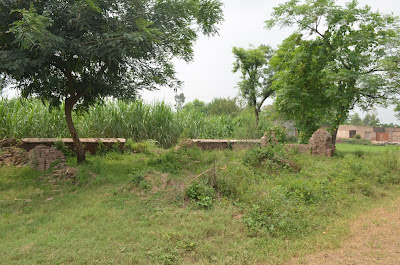 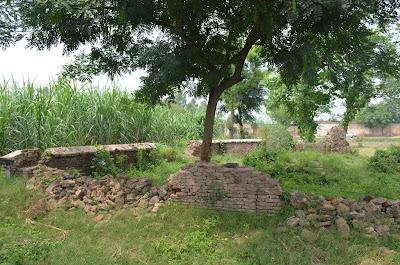 I wonder what happened to the Sikh soldiers who fell on that fateful day? The battle continued till evening and the Sikh army retreated, so they definitely had no time to cremate their soldiers. So what happened to them. Similarly there were Muslims in both armies, where they were buried? I hope somebody would enlighten us about that.


View Monument of the Battle of Chillianwala in a larger map
Posted by Tariq Amir at 00:15