133 - Demographics of Balochistan Province According the Census of 1941 (Religions)

Balochistan (also spelled Baluchistan during the British Raj) was the farthest corner of the British Empire in India in every sense of the word. It was sparsely populated, far away from the main centres of population and on the borders in the extreme west of India. British started taking interest in this area in the late 1830s. At that time the East India Company had already subdued the whole of present-day India and just two independent states of Sindh and Punjab were out of their influence. In 1839 EIC and the Punjab state under Maharaja Ranjit Singh, planned to install the deposed King Shah Shuja on his throne in Kabul replacing Dost Muhammad Khan. According to the plan the joint forces were to assemble at Shikarpur in Sindh and then march towards Kandahar via Bolan Pass. During this campaign the British forces occupied Bolan Pass and then the area around Quetta and Chaman, Kandahar fell too and later on Kabul as well.
This was the first time that the strategic importance of Quetta was recognized by the British and later on a cantonment was established here, around which a city soon developed. But we all know that the invasion of 1839, known as the first Anglo Afghan war ended in a disastrous retreat three years later in 1842. Soon after that Afghanistan and other occupied areas including Quetta were abandoned. However, during that period in 1839, an expedition from Quetta conquered Kalat and the state, hitherto under the suzerainty of Afghanistan was forced to accept British India as the paramount power.
The 1840s brought dramatic changes in the political conditions of present-day Pakistan. Sindh was annexed by the EIC in 1943 and soon after that in 1846, Punjab too was defeated and in 1849 fully annexed to India. By this time all the major provinces were conquered by the British but the western frontiers of this vast empire were not clearly defined. That process took a few more decades to complete. In 1854 the treaty of 1839 was renewed and Kalat again accepted the suzerainty of the British government in Delhi. The next milestone was the year 1876, when the British permanently occupied Quetta and extended greater influence over the state of Kalat, including taking responsibility for internal and external peace and security of the state.
During this period British kept on increasing their influence and control over the districts of Loralai, Zhob and Sibi as well, with the mixed policy of force and coercion and gradually brought all the tribes of this region to accept the status of the British as the paramount power. The start of the second Afghan war in 1878 only increased the British control of these areas and at the end of this war the next year, the treaty of Gandamak was signed. By the treaty of Gandamak (May 1879), Yaqub Khan, the king of Afghanistan, formally ceded the districts of Pishin, Quetta, Loralai, Sibi, Zhob, etc. to the British. In the meanwhile, Balochistan’s western border with Iran was settled in 1871.
This is how the British acquired the territories which currently form the Pakistani province of Balochistan. I shall not go any further into the history of Balochistan as the subject of this post is the religious demographics of Balochistan in 1941, the last census before the partition of India in 1947. 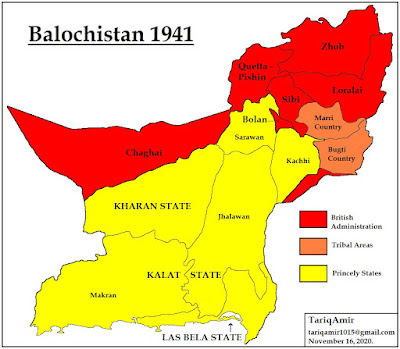 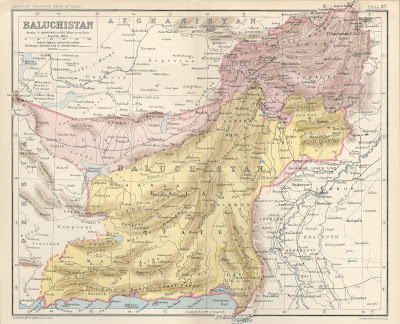 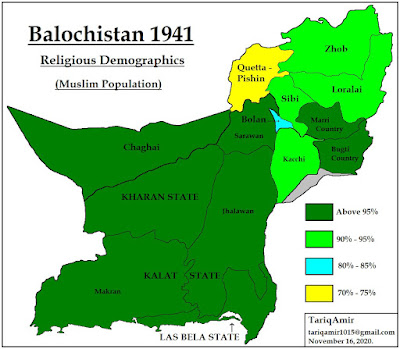 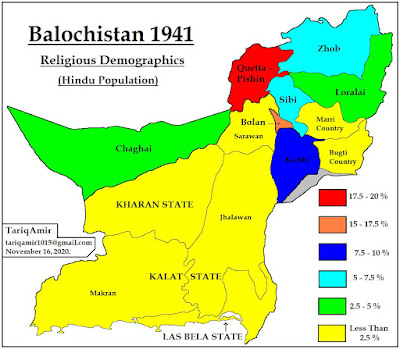 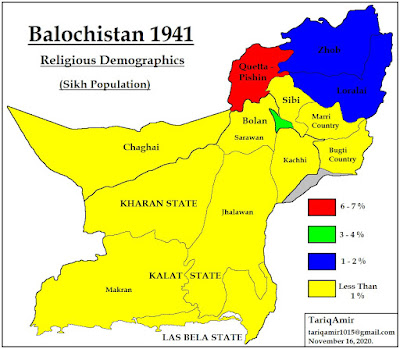 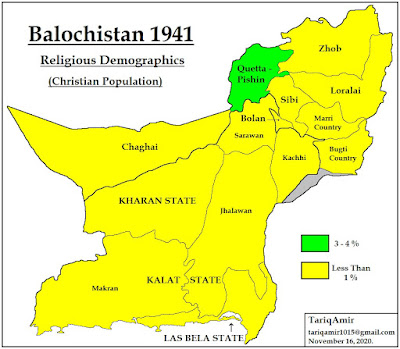 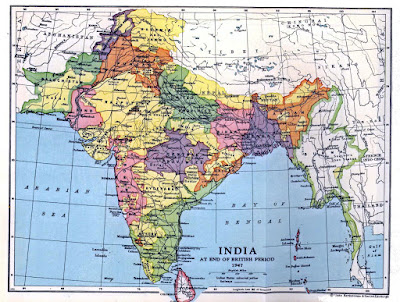 Balochistan in British India.
I hope anybody interested in the history of Balochistan and its demographics will find this post useful.