At the time of independence in 1947, British India had almost 565 Princely States, constituting 23% of the total population and covering nearly 40% of its Area. These states varied greatly in size and population. The biggest in population was Hyderabad with a population of over16 million, while Jammu & Kashmir was the largest in area at 218,685 km2, slightly bigger than Hyderabad but with far less population of 4 million. The smallest 200 states had an area of less than 25 km2 each.
These states were autonomous in many respects but not fully sovereign states and were part of British India under a subsidiary alliance. According to the Indian Independence Act the princely rulers were given the choice to either accede to India or Pakistan, but were expected to take into consideration the geography of the state and ascertain the wishes of its people. All of them joined India or Pakistan with more or less without much trouble, except three states which were Jammu and Kashmir, Hyderabad and Junagadh.
The subject of this post is Jammu and Kashmir, the state that caused most of the trouble and laid the foundations of a conflict that is still raging among three countries with full force. It all started due to some ambiguities in the principle of the accession of states and also on the unclear policies of India and Pakistan related to princely states. I am sure had they decided the future of states in clear terms, this conflict could have been avoided. Both Muslims League and All India Congress should have agreed to a clear and well-defined formula about the accession of states to either of the two countries. Perhaps this ambiguity was deliberate on both sides and both sides were trying to draw maximum advantage out of the situation.
The Maharaja of J&K, Hari Singh failed to make up his mind and take a clear about the future of his state. This delay created a lot of tensions within and without the state. Rising communal tensions in Punjab were effecting the environment inside the state as well. The Muslims in the western districts were agitating against the government and Poonch was in open rebellion by August, 1947. The major disturbance broke out in the Jammu area when RSS and Akalis organized a mass attack on the Muslims and a very large number of people were killed, variously estimated between 20,000 to 100,000. Now the die was cast and soon on 24 October, people declared independence in Poonch district and formed Azad Kashmir Government. On 24 October, rebels in Poonch formed Azad Kashmir Government. Meanwhile, Pakistan, a country in transition and with armed forces in process of re-organization and short of all kinds of arms, ammunition and equipment, used tribal lashkars to tilt the situation to its own advantage. The lashkars started pouring into J&K on 22 Ocotober and quickly captured large areas and by 26 October reached Barmulla just 30 kms from Sringar, key to the Kashmir valley. At this point, Hari Singh finally decided to join India and the next day India started airlifting its troops to Srinagar airfield and other spots in the states. A large part of the state was liberated but fighting continued throughout 1948 and India regained large areas, including important towns like Rajouri, Noushera and Kargil etc. Rest as they say is history.
The purpose of this post is to familiarize my readers to the distribution of religious communities prevailing in 1947. That will help them in understanding the situation in 1947 and the subsequent history. As you will see in the map given below there were show you the location of Muslim princely states. It is interesting to note that just two of these three dozen Muslim states, Kashmir and Kapurthala were having a majority Muslim population but ruled by a Hindu and a Sikh ruler respectively. 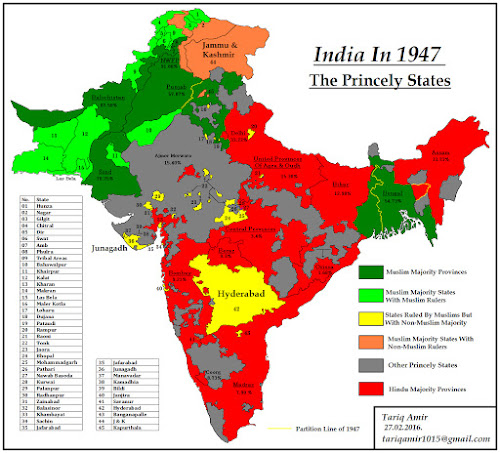 The Princely States of India in 1947.

Jammu and Kashmir was a big state and divided into three main administrative regions, all having overwhelming or clear Muslim majority, as the tables and maps would explain. 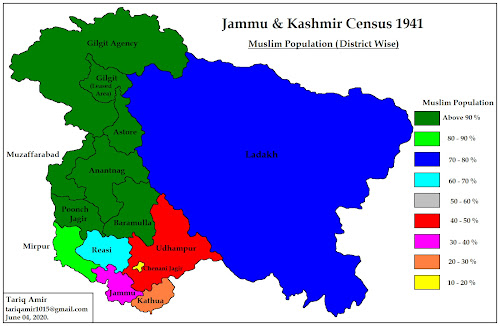 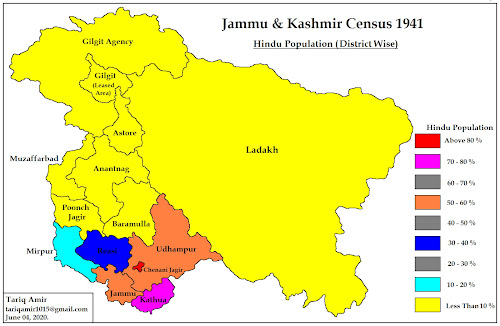 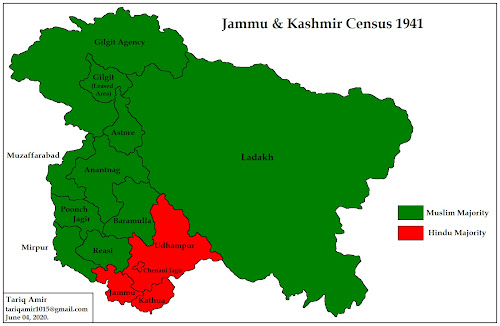 To provide more detailed picture tables and maps are given below to show the population distribution in tehsils. Due to the unavailability of the map of Kashmir showing the boundaries of tehsils, I could make a map of  Jammu Province only. This map is based on the Census Atlas of 1971. The Kashmir region has gone under more drastic changes, so I could not make a tehsil map of Kashmir Province. Anyway, Jammu with a more diverse population is more important to our study. Kashmir in all districts and tehsils is overwhelmingly Muslim. 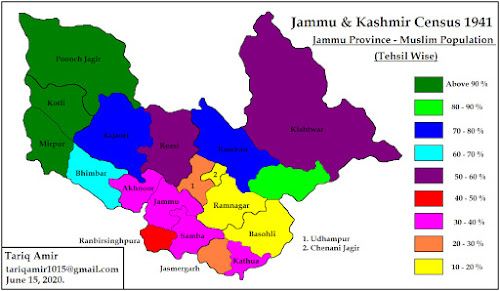 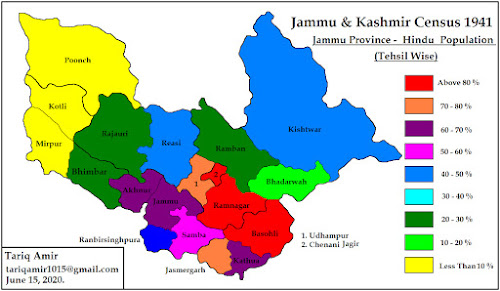 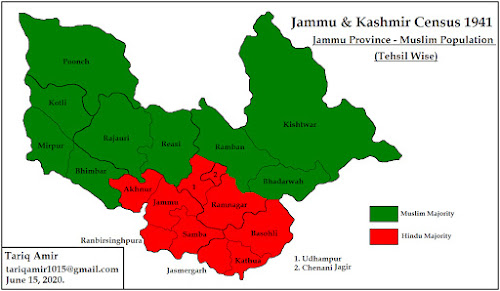 It was very difficult for Congress and its followers and Hindu masses in large, to accept the decision of partition. However, they accepted the decision to divide mother India and lose almost one fourth of its land mass to Pakistan and did not resisted it beyond a certain point, obviously in the larger interest of the whole region. But as far as the issue of Kashmir is concerned they are using all means in the their power to keep this region and its hapless population under their control. That is indeed a little puzzling. As I mentioned earlier, both parties should have agreed to a clear formula regarding the accession of the princely states before the independence to avoid this tragic mess. I would have advocated the same formula which was applied in the neighbouring Punjab. That would have given the two Hindu majority districts of Jammu and Kathua to India and two tehsils of Udhampur district (Udhampur and Ramnagar to India) and the Chenani Jair as well. Even some areas in the south east of Ladakh, adjoining Himachal Pradesh could have been given to India. That should have satisfied both the parties and have saved 1.5 billion people from a very dangerous and extremely damaging conflict. But that was not to be and now we can look at the future without much optimism.

For the demographics of Indian controlled Jammu & Kashmir, kindly visit the following link:

You are most welcome to add any more information or point out any mistake in data or maps.