A few weeks ago, I came across a webpage, which gave the names of all the members of the Punjab Assembly of 1946 - 1947. Now the students of history can well understand its significance. Because this was only the second but the last elected assembly of the Province of Punjab, of British India. It was this assembly, which took the fateful decision of diving Punjab, between Pakistan and India.

In January, 1946, election was held to elect the 175 members of this assembly. One can safely claim that these elections were referendum on the question of Pakistan, and without winning Punjab, it was impossible for Muslim League to claim Pakistan. The election for this provincial assembly proved a great success for Muslim League.

It was a great victory for Muslim League as it won 73 Muslim seats out of total 86. Thus justified its claim to be the voice of Muslims in the province.

The above list shows that the seats were divided into different categories. The rest were declared as general, reserved, for towns, technocrats, etc.


It was the second provincial assembly, elected under the Government of India Act of 1935. Some names, which I found familiar or interesting include, Diwan Bahdur S.P. Singha, the speaker, Malik Khizar Hayat Khan Tiwana, Premier, MRs Rameshwari Nehru, a relative of Pundit Nehru, Master Tara Singh, a firebrand Akali leader and Raja Ghazanfar Ali Khan the representative of my native constituency of Pind Dadan Khan and later a minister in the interim government of India.

The above map show the Provinces of British India and the princely states. 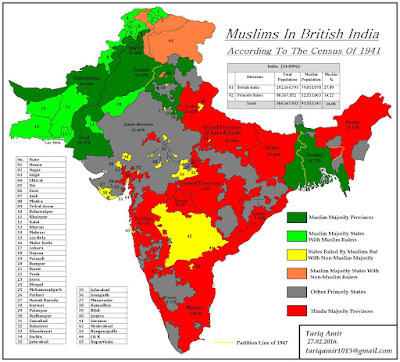 According to the partition plan of 3 June, 1947, Punjab province was divided into East Punjab, with 12 non Muslims majority districts and West Punjab with 17 Muslim majority districts. This division was called notional division, pending the actual division decided by a boundary commission. The assembly was also divided into two parts. It was decided the if any of the two assemblies decided to divide the province between Pakistan and India, the boundary commission will decide the new border. The assembly of West Punjab decided in favour of united Punjab, but the assembly of East Punjab decided 50 to 22 in favour of division. 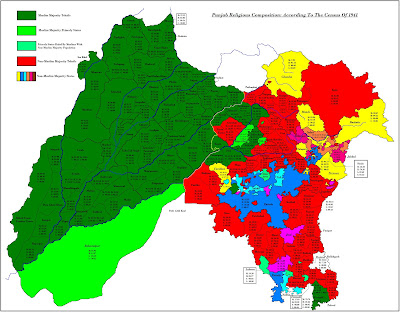 As usual, at the end I would like to invite my readers for give their valuable comments and would appreciate, any additional information related to this subject.