This mosque in the old part of the city of Sialkot was managed by Maulana Mulla Kamal ud Din. He could not find details about Mulla Kamal ud Din, but his fame is due to being the teacher of famous Muslim scholar Sheikh Ahmad Al Fruqi Al Sirhindi, famous as Mujaddid Alf Sani. Following excerpts from Wikipedia give the following information about these two persons:

Shaykh Ahmad Sirhindi was born on 26 June 1564 in the village of Sirhind. He received most of his early education from his father, Shaykh Abd al Ahad, his brother, Shaykh Muhammad Sadiq and from Shaykh Muhammad Tahir al-Lahuri. He memorised the Qur'an. He then studied in Sialkot which had become an intellectual centre under the Kashmir born scholar Maulana Kamaluddin Kashmiri. There he learned logic, philosophy and theology and read advanced texts of tafsir and hadith under another scholar from kashmir, Sheikh Yaqub Ali Hamadani Sufi Order. Qazi Bahlol Badakhshani taught him jurisprudence, prophet Muhammad's biography and history.

So we can understand that Mulla Kamal ud Din taught Sheikh Ahmad in this mosque during the last two decades of the 16th century, during the reign of Mughal Emperor Akbar. This mosque is located in the old part of the city at  32°29'24.07"N, 74°32'33.02"E. 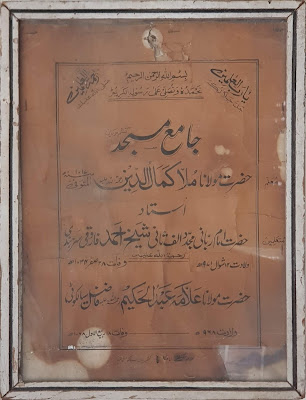 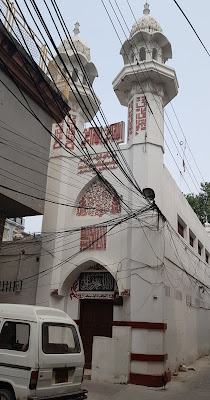 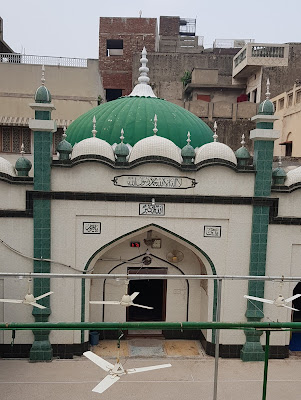 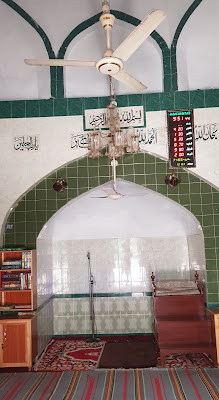 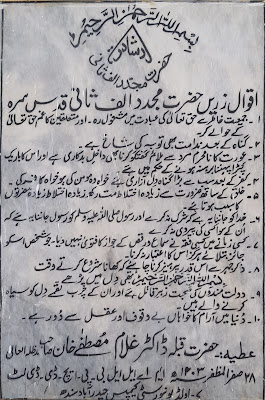 The mosque, as you can see in the pictures is in excellent condition. However, unfortunately the renovation has been done not in a traditional style but with modern style. So the original decorations or paintings and designs have been lost forever.