107 - A Tour of Bhera City 2: A Few Glimpses of the Beautiful Architecture of Bhera

In the second part of my post about my visit to Bhera on 22 July, 2019. I shall share with you a few more culturally and architecturally important buildings in Bhera. I would like to repeat that these are just a few glimpses of the beauty of Bhera. This town is no less than a huge museum of the beautiful architecture of this region. Only a big team of architects, historians and professional photographers, with plenty of time and resources, can do justice to the task of capturing all the masterpieces of architecture, with which this town is replete.

One such masterpiece is famous as Peeli Kothi (yellow mansion), in Sheikhnwala Mohalla. It once belonged to Malik Tilak Raj Anand. A very rich and famous man of Bhera. He belonged to Anand family, who once ruled Bhera. His two brothers Mahraj Bal and Suraj Kaur also lived with him. Currently, many families are living here and probably the people of Shia sect also use it as Imam Bargah. This magnificent haveli is located at 32°29'7.60"N, 72°54'32.10"E.

While passing through a street, Nayyar pointed towards a home where Madan Gopal Bhatia was born in 1936. He wrote an article on a, now dysfunctional website, Bhera.com. This article tells about the life before partition and the fond memories he has of that era. He also describes the hardships people had to face during the turmoil of 1947.

Madan Gopal Bhatia, is currently residing in USA and as per Nayyar, Tilak Raj was her daughter in law's maternal grandfather.

I was born in Bhera in 1936. My father Kundan Lal Bhatia was an advocate there. Beside regular practice my father was a legal advisor to a number of land owning families of Bhera including Malik brothers, Suraj Kawr, Tilak Raj and Maharaj Bal, whose relations still own land near Bhera and live there too. We live in mohalla Haji Gulab (adjacent and on the eastern side of mohallah Loharan Mori), right opposite the Haji Gulab mosque. Our house was located at the corner of the street of Hindu families. Besides others two notable Hindu families of Duas and Malhotras of our mohalla were engaged in the henna (Mehndi) business. i completed my primary education in the Chiri Chog Primary School  (Established in 1876) and joined Kirpa Ram Anglo Sansikrat High School (now Government Higher Secondary School for Girls) in 1946 for further studies. I had only passed 5th grade in that school and was enjoying my summer vacations when the partition of India took place in 1947. We had to move to a safer place following a tragic incident in which a young married shopkeeper in Choprian di Mandi area was murdered by a group of unknown and unfamiliar Muslim miscreants. The murdered shopkeeper belonged to Hindu religion.

As a consequence thereof, some affluent and resourceful Hindu families quickly left Bhera clandestinely and the lesser unfortunate families likes ours were left to defend ourselves. We had very good relations with Muslims and in fact most of my friends and clients of my father were Muslims. One such friend was court clerk of S. Jodh Singh advocate. Our house being in front of the mosque were were the first to enjoy dates distributed on Friday after the prayers. We always partook in each others festivals besides other happy and not so happy events in the families.

I will be remiss if I do not mention about the famous Piracha family of Bhera. Fazal Haq Piracha had excellent rapport with all Hindu families of Bhera. In fact his efforts saved lives of the Hindu families. He had a big hand in saving Hindus from being murdered in the train when they were attacked on way to the refugee camp in Mandi Bahauddin. The train carrying Hindus was waylaid by the Muslim miscreants on the out skirts of Hazurpur Railway Station by blocking the rail track with big wooden logs and rail sleepers. The miscreants' efforts to murder Hindus in the train were thwarted by not only Pirachas but also by a Muslim Captain (according to Professor Gian Sarup) and a dozen of Sikh soldiers who were escorting the train. On reaching Mandi Bahauddin we were first lodged in a cotton mill for a few days and later on moved to Khalsa High School Camp. We remained in that camp for about a month and embarked the train for India in the last week of September 1947. The life in the camp was horribly miserable as the living space was limited and Hindu refugees from the surrounding cities and villages were following in by large numbers every hour of our stay in the camp.

We reached India and initially stayed in a cotton mill compound located in Chhecharta on the G.T Road near Amritsar. Afterwards with no likely destination in sight we moved to Jalandhar City where we idly spent a few days on the railway station platform like nomads. We than moved to Kapurthala where we lived for a year or so and moved back to Jalandhar as my father could not start his legal practice there, Kapurthala being a princely state then. He had his professional licence which was valid to practice in Punjab only. We had to work very hard to feed the family of eight people. Myself (then 12 to 13 years of age) and my father used to write applications of refugees for buying food and clothing items from the subsidized ration stores wet up by the Indian Government. The paltry amount of money earned by both of us enabled us to buy food items for the families on day to day basis. Since my father was a man of the time-tested principles, he never begged to borrowed money from relatives / friends including my elder sister whose husband had a sports good business setup in Cochin State (Kerala - India) before India's partition.

My father started legal practice in Jalandhar ab-initio, where he received his legal library books from Pakistan through the efforts and good offices of two Piracha brothers by the names of Ala ud Din Piracha and G.M Piracha (Ghulam Murtaza Piracha), the former was the first Surveyor General of Pakistan and the later was CSP officer and retired as Commissioner.

As long as my father was alive, he instilled in us the Bhera spirit i.e. the glorious memories and anecdotes of eminent Bherochis like Birbal Sahni (scientist) Shatisarup Bhatnagar (scientist), Feroz Khan Noon (politician) and famous Piracha brothers - Fazal Ilahi and Fazal Haq (civil servant and politician). My belief in being a Bherochi was further reinforced when I happened to read a travelogue "Pakistan Ka Safar" written by none other than Balraj Sahni, we well known actor of Indian movies of yester years and also stories written by his brother Bhisham Sahni. I had already known Sahnis, who were mostly landowners, and who had good rapport witht the British rulers, were responsible for putting Bhera on the world map. As and anecdote, I may mention here tha tI had the privilege of working for a Kashmiri Muslim boss from Srinagar (India) who told me that whenever a child was born in Bhera his or her face was always towards England as there were a lot of Bherochis, both Hindu and Muslims, settled in England during the English regime. I retired from the Indian Audit Departmen and am now living in USA. I still find Bhera families in USA from the accent of their spoken Punjabi language of Bhera. I miss taking a dip in the Jhelum River on Baisakhi celebration day every year. 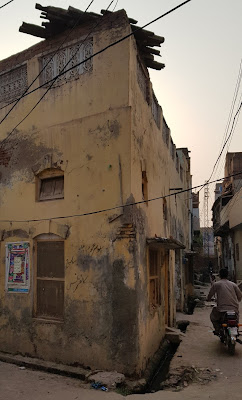 Pirachas are a very old and prominent family of Bhera. They own many marvellous buildings in the town, that are part of the rich architectural heritage of this town. Some of them are shown below: 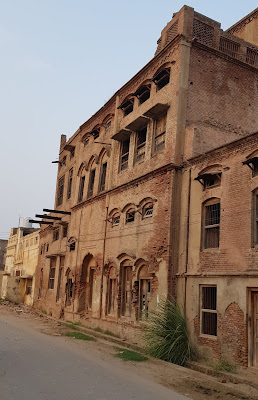 The picture given below is of a Hindu Janj Ghar (marriage procession house or guest house), built by the prominent Anand family of Bhera, who in the Mughal period ruled this area. After the partition, this building was allotted to some refugee family. Later on Mumtaz Piracha purchased it from them and currently Amjad Piracha owns this building. Could not find its date of construction but it can  be safely assumed to be at least a hundred years old. It is located at  32°29'10.01"N, 72°54'29.04"E.

At the time of independence, almost all the Hindus and Sikhs from western Punjab migrated to India, including the Anand family. But a few members of this prominent family did not migrate, one of them was Jagdish Chand Anand. According to Wikipedia:

Anand was born in Bhera in 1922 in Bhera, Sargodha District, British India. His father was a businessman. His family opted to stay back in Pakistan at the time of Partition in 1947. Indian actress Juhi Chawla is his wife's sister's daughter. His son, Satish Chand Anand continues to make films in Pakistan. 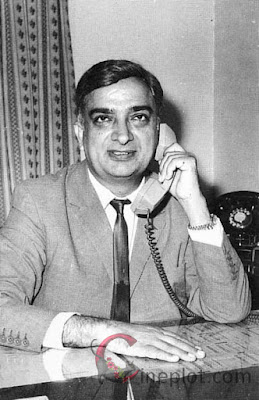 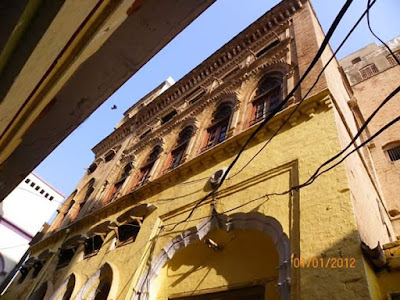 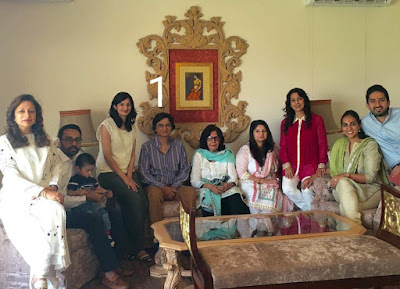 The following two pictures of the house of Ghulam Habib Piracha (late). It is difficult to take a good picture of a building in narrow streets. However, the house is so beautiful that even a picture far from perfect, can show its beauty. 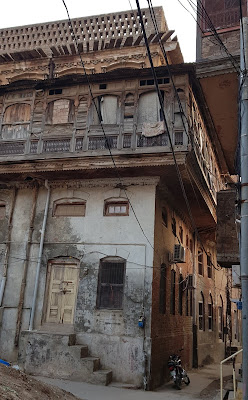 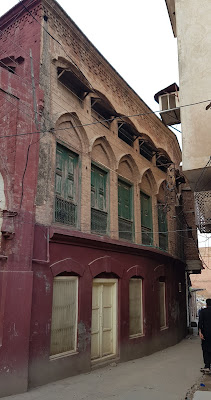 In the same Mohallah Pirachgan is located a shrine of a saint Hazrat Miran Shah. Nayyar sahib provided the following information about him:

Hazrat Miran Shah was a great saint who worked for the spread of Islam in the area. His shrine is located in the western part of the town in mohalla Pirachgan. People from different sects and places visit his shrine in the month of March/ April (Chaitra) to pay homage to the saint. Because of him Bhera is also known as Miran the Nagri. Miran Sahib was born in the late 16th century or early 17th century. His exact date of birth is not known. However, he died in 1680 AD in Bhera, it was the era of Mughal king Aurangzeb. He was also there at the time of Jehangir and Shah Jahan. 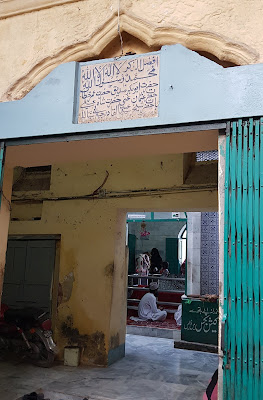 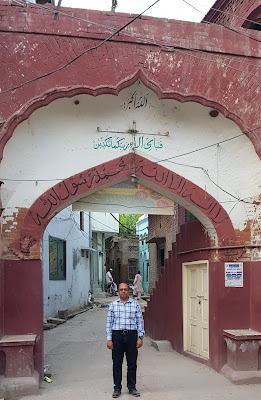 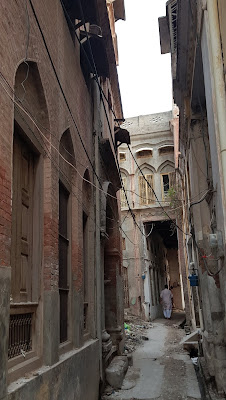 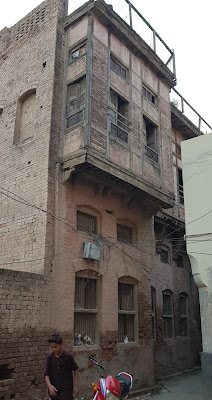 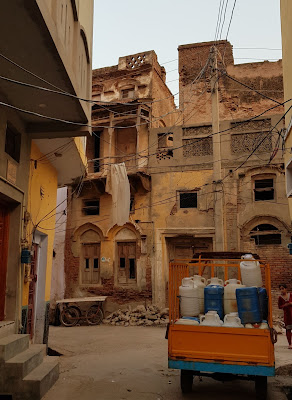 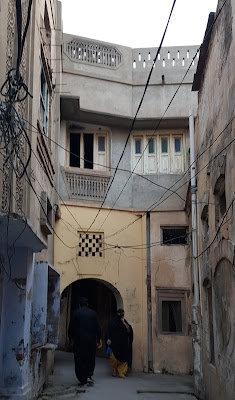 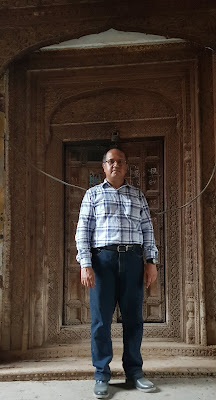 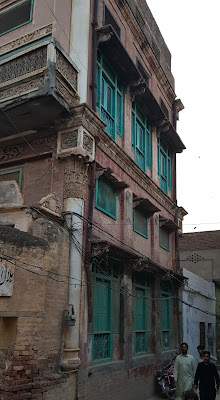 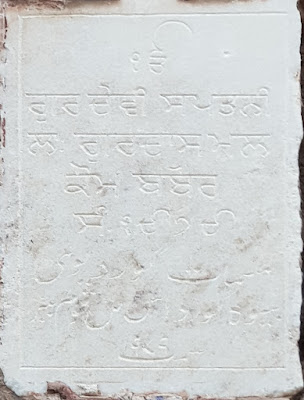 Nayyar Abbas informed me of a project of which he is an important part. Keeping in view the prospects of tourism in Bhera they are planning to establish a guest house to provide proper accommodation to visitors. For this purpose, they have selected a house on the circular road and the repair and maintenance work has already started and is expected to be completed soon. They are considering to set up a website for visitors to book online. I am sure this will promote tourism in Bhera. The guest house is located at  32°29'7.10"N, 72°54'5.09"E. 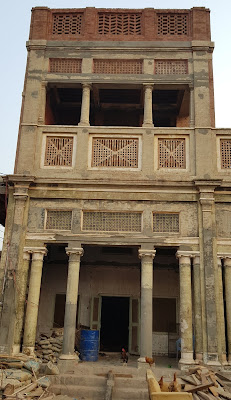 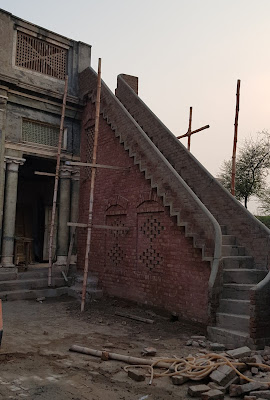 At the end, I want to especially thank Nayyar sahib for sparing almost three hours and in this short time he took me on a whirlwind tour of the town and helped me in discovering and understanding its beauty. It was not easy to roam about in the streets of Bhera in excessively hot and humid weather. It is a pleasure to explore the town in the company of a soft spoken, well mannered and well informed person like Nayyar Abbas. All the information given in this post was provided by him. He can be contacted for more information at nayyarabbas25@gmail.com.

It is a matter of great satisfaction that authorities have started realizing the historic and cultural importance of Bhera and plans are underway to extend the authority of the Walled City of Lahore to Bhera also. If this plan is implemented, it will be very helpful to preserve our invaluable heritage in Bhera.

Here I must mention that despite taking dozens of pictures I could not capture even a fraction of the architectural beauty of this magnificent town. To fully understand and show its magnificence will need a concerted effort of a team of historians and professional photographers. Please also visit my following links about Bhera.