First time I saw the Stupa of Mankiala in 1989 or 1990, while travelling on GT. Its huge round distinct round shape is quite visible from GT road, less then two kilometers away. Subsequently I saw it many times, but could not find any information about it. Though I was sure it is was not a natural feature. It took me nearly two decades to find out that that curious looking hill was a Budhhist Stupa. It is located at  33°26'53.12"N,  73°14'36.59"E.

A stupa is a round shaped hemispherical structure, built by Budhhist for religious purpose. They use it for the burial of holy relics and also the ashes of monks. Ashes of Budhha were buried in eight different stupas. Ashoka embraced Budhhism in around 260 BC and gradually it became popular across India. During this period Budhhists constructed a large number of Stupas, in various sizes. Some of them can be found in northern Pakistan, in the region which was home to Gandhara Civilization.

So after a quarter century, I finally was able to satisfy my curiosity and saw Mankiala Stupa, just 34 kilometers away from the zero point. We reached Tope of Mankiala, as it is locally known, from the direction of Sagri village. It was a hazy and dusty day on 14th December, 2016. Pothohar has a beautiful landscape, but a drought for the last three months, had marred the beauty of this region. 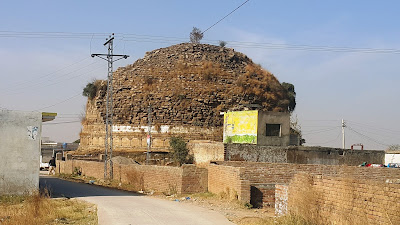 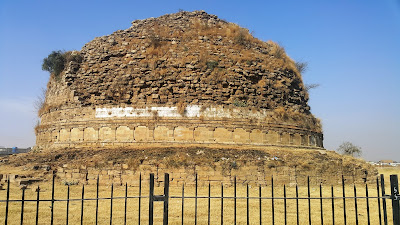 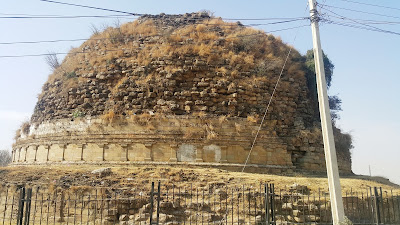 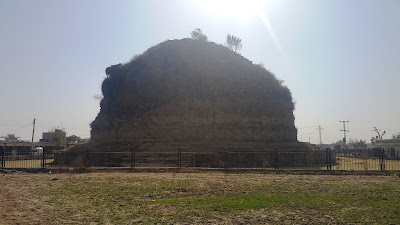 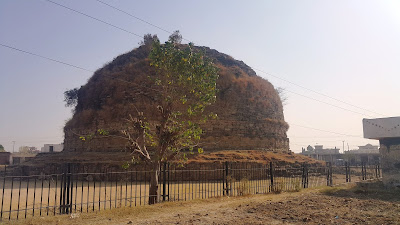 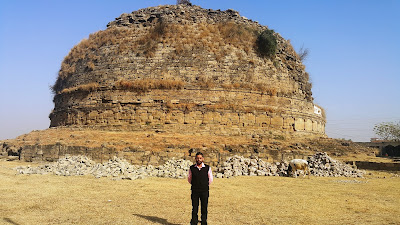 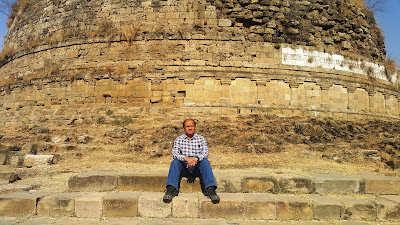 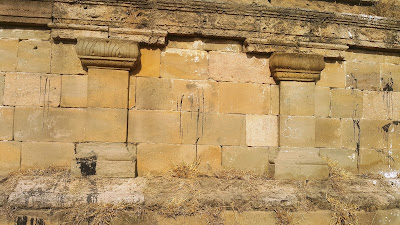 It is very important historical building of Pakistan, perhaps the biggest stupa in Pakistan. An article, by Mr Jamal Shahid, was published in Dawn on 21.7.2015. The following excerpt is from the same article:

According to the archaeologists, somewhere in the mid-1800s, Jean-Baptiste Ventura, an Italian traveler and mercenary, who later served under Maharaja Ranjit Singh of Punjab, excavated the site and removed many artifacts that can now be found in museums in Europe.
“There is no record of how many artifacts were carried out of the country. Some notes written by Jean Ventura merely hint at the magnitude of the plunder,” said the official.
The Mankiala Stupa was built by Ashoka as a memorial to the place where Buddha offered his flesh to a hungry tigress and her cubs.
“There are some 550 stories of Lord Buddha’s reincarnations. The eight most famous ones are depicted on relief works and engravings found in museums. Offering his flesh to the tigress is one of these eight which is associated with this place,” said Ghafoor Lone.
The official in the Punjab Department of Archaeology, which is the custodian of the site, did not dispute that the site had been neglected, especially after devolution five years ago. At that time, the administrative control of all protected sites and monuments was taken away from the federal archaeology department and handed over to the provinces. 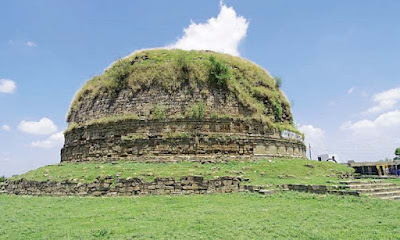 However, an article in wikipedia claimss this stupa was built during the reign of Kanishka (128 - 151 AD) and was discovered in 1808 by Mountstuart Elphinstone. It also mentions it be plundered by Jean Baptise Ventura in 1830 and also informs about some restoration work in 1891 by the British Indian Army and Raja Usman being the architect. 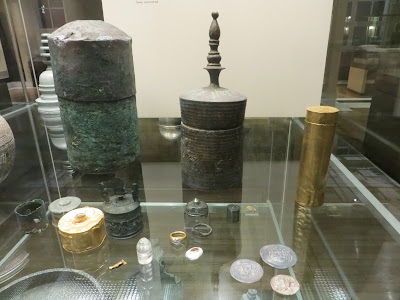 Relics found in the Stupa of Mankia. (Wikipedia)

It is quite visible from the above pictures that the stupa is in a bad shape and crumbling fast. If no repair is done soon, its condition will further deteriorate.  The most disturbing aspect is encroachment from all sides. Now it is surrounded on three sides by very closely built shops and houses. That is also affecting the view very badly. It is an archaeological treasure but it is clear that we do not value it.