As I mentioned earlier in my post on Captain Raja Sarwar Shaheed, NH, the old Rawalpindi division is home to 5 of ten Nishan-e-Haider recipients. Even before the creation of Pakistan, this region was an important source of recruitment of soldiers for the British Indian Army. Hundreds of thousands of them participated in the two world wars and fought bravely. One of them was Shahamad Khan, of Takhti a small hamlet in tehsil Gujar Khan, district Rawalpindi.

On 14 December, after visiting the monument of Captain Sarwar Shaheed NH and grave of Sawar Muhammad Hussain Shaheed NH, we reached Takhti in late afternoon. My friend Muhammad Munir was with me during this expedition. He was constantly wondering at me finding this remote place associated with Shahamad Khan, an equally unknown figure in our beloved country.

It was late in the evening and winter sun was setting fast. We hurriedly took some pictures and offered Fateha. It is a very small village and we could see only a few children playing around this small cemetery and two women could be seen busy in evening chores, in a nearby home. People in small villages still take their dinner at the sunset or soon after.

We were about to leave when a man came on a motorcycle, sitting behind a young man. He introduced himself to us and I was happily surprised to know that he was a grandson of Shahamad Khan. His name is Raja Muhammad Riaz son of Raja Muhammad Akram son of Shahamad Khan. We had a little chat with him and he told us that this new monument was erected less then a year ago, close to the centennial celebration of Shahamad's Victoria Cross, by the Punjab Regiment. He did not know who currently had the possession of his Victoria Cross. He has a brother living in Rawalpindi, who has some papers related to Shahamad Khan. His medal is now probably a part of Lord Ashcroft's collection.

The grave of Shahamad Khan is located in Takhti (Takti Rajgan on google earth) at  33°21'32.19"N, 73° 4'12.57"E. About 52 kilometers from the zero point of Islambad, on Rawat - Chakbeli Khan road. A small road leads to Takhti, which is 4 kilometers away from the main  road. But there is a stream near Takhti, with no bridge over it, however it is passable in good weather. The grave of Shahamad Khan is just 500 meters across this stream. 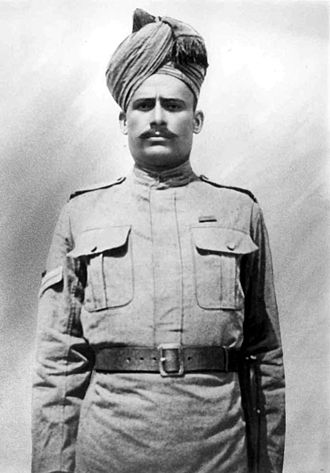 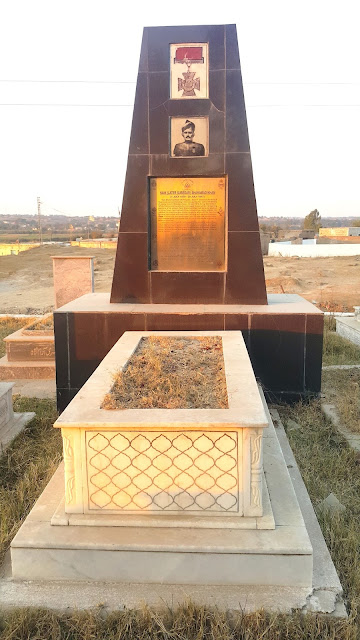 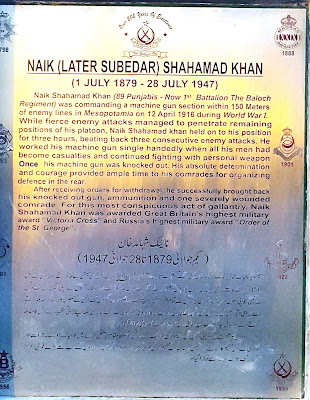 Naik Shahamad Khan (89 Punjabis - Now the 1st Battlation The Baloch Regiment) was commanding a machine gun section within 150 meters of enemy lines in Mesopotamia on 12 April, 1916 during WWI. While fierce enemy attacks managed to penetrate remaining positions of his platoon, Naik Shahamad Khan held on to his position for three hours, beating back three consecutive enemy attacks. He worked his machine gun single handedly when all his men had become casualties and and continued fighting with personal weapon, once his machine gun was knocked out. His absolute determination and courage provided ample time to his comrades for organizing defence in the rear.

As you can read above, Shahamad Khan not only won VC but also the the highest military award of Russia the "Order of St. George". This perhaps makes him  unique in all the Indians who won Victoria Cross. But I could not find any reference of his getting Order of St. George, anywhere else. 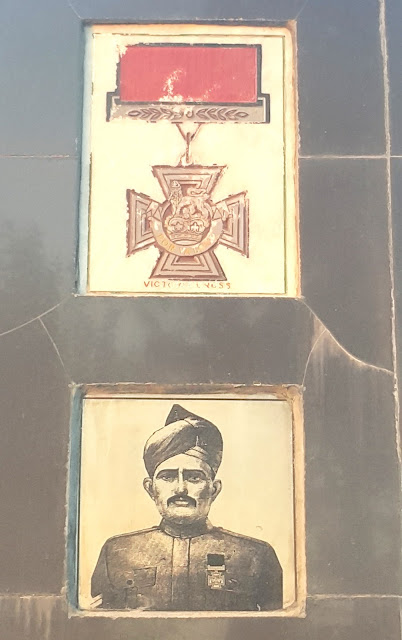 I found a video and some more details about his acts of bravery. I have given the links below:


For most conspicuous bravery. He was in charge of a machine gun section in an exposed position, in front of and covering a gap in our new line, within 150 yards of the enemy’s entrenched position. He beat off three counter attacks and worked his gun single-handed after all his men, except two belt-fillers, had become casualties. For three hours he held the gap under very heavy fire while it was being made secure. When his gun was knocked out by hostile fire he and his two belt-fillers held their ground with rifles till ordered to withdraw.
With three men sent to assist him he then brought back his gun, ammunition, and one severely wounded man unable to walk. Finally, he himself returned and removed all remaining arms and equipment except two shovels.
But for his great gallantry and determination our line must have been penetrated by the enemy.
Click here to see full Gazette entry.Other decorations: N/A
Place/date of death: Takhti, near Rawalpindi, Pakistan/July 28, 1947
Grave/memorials: Takhti Cemetery, near Ralwapindi, Pakistan
Origin of VC to the Lord Ashcroft collection: Purchased privately, 1999
Current location of VC: Displayed on rotation at The Lord Ashcroft Gallery: Extraordinary Heroes exhibition, Imperial War Museum 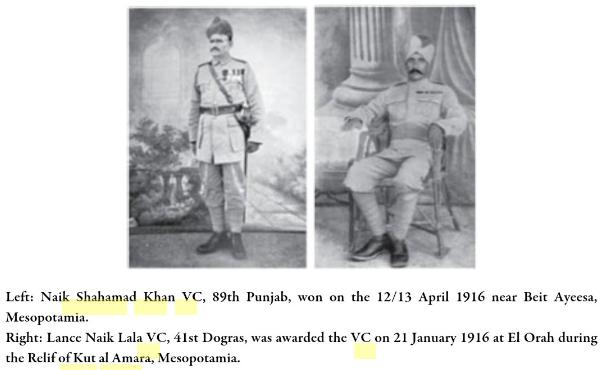 SHAHAMAD KHAN, Naik, served in the European War, in Mesopotamia and was awarded the Victoria Cross [London Gazette, 26 Sept. 1916]: "Shahamad Khan Naik, No. 1605, 89th Punjabis." (See Appendix.) He was born about' 1879, at the village of Takti, near Rawalpindi, son of Fayal Khan. He joined the Army 1 Dec. 1904, serving in the European War at Shaik Sa'id, Arabia, in Nov. 1914; in Egypt, the Dardanelles, France, Mesopotamia, the Mohmand Blockade, Salonika and the Caucasus. Shahamad Khan has now been promoted to Jemadar (Jan. 1920). London Gazette, 26 Oct. 1916.-" The King has been graciously pleased to award the Victoria Cross to the undermentioned Officers, Non-commissioned Officers and Men." 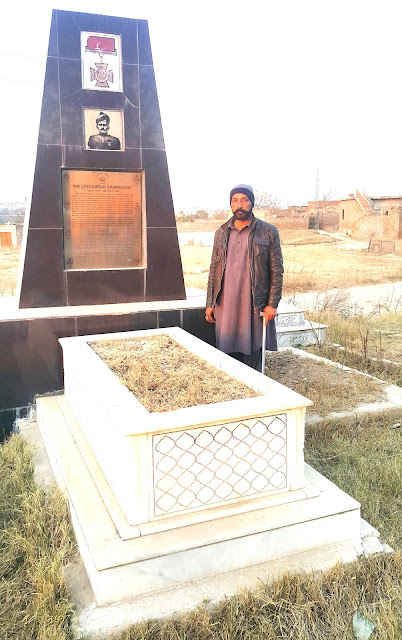 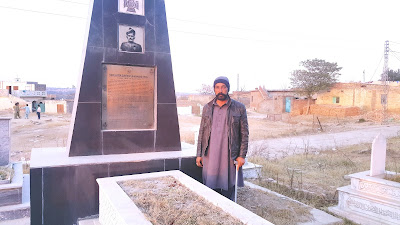 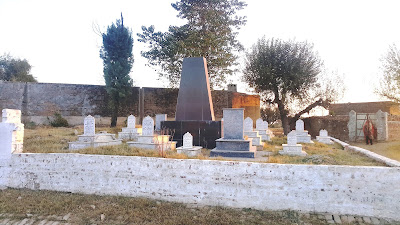 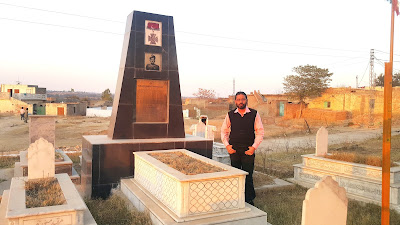 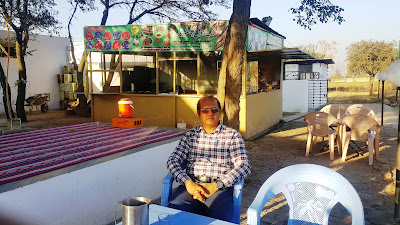 
While writing this post, I felt the name of Shahamad Khan curious. I have never heard such a name before and linguistically also it makes no sense. I know from my own experience that village people still pronounce Ahmad as Aamad. And we are talking about an era almost a century and half old. So in my opinion it is quite possible that his name was Shah Ahmad Khan (شاہ احمد خان) and not Shahamad Khan. So somebody at some stage wrote his name as he heard and understood and those spellings stuck on. But, my friend Munir contacted Raja Riaz his grandson and he said that the name was indeed Shahamad Khan (شہامد خان).

I shall wait for your comments and will welcome any contribution on this topic. I still cannot find the battle and its location, where this incident happened on 12 April, 1916. At that time a division of British Indian army was under siege at Kut Al Amara, Iraq, which surrendered on 29 April, 1916 and all the persons were taken prisoners. But Raja Riaz told my friend Munir that his grandfather was not taken prisoner. So may be, he along with his unit was deployed somewhere else. My friend Munir not only accompanied me on my visit to Takhti, but also contacted Raja Riaz to make some enquiries on my behalf. Similarly my friend Omar Haroon, living in San Francisco, helped me in correcting a grammatical mistake (just one little mistake).

The second question is more intriguing. What he is today for us? A hero or just a mercenary? After all on 12 April, 1916, when he was manning his machine gun, Muslim soldiers of Ottoman Empire were on the receiving end. What was he thinking while fighting his own fellow Muslims? It is well known that Muslims soldiers were having a very uneasy conscience due to this fact. A man is product of his time, and so they were too. We cannot judge them a century later, living an altogether different circumstances. They made their choices and fulfilled their commitments. Shahamad Khan too was such a person, who enlisted in the army due to his own reasons and when the time came he did not wavered. That is the most important thing. Now that generation has passed away. May their souls rest in eternal peace.