There are dozens of gurdwaras and religious institutes in India, Pakistan, Europe and North Africa named Nanaksar. Nanaksar or Nanak Sar, as far as I understand, means (sacred) Pond of Nanak (first guru of Sikhs. But in Pakistan there is a village 12 kms awary from  Jhang on Toba Tek Singh Road, which itself is known as Nanaksar (also spelt Nansksir). This small village houses an old gurdwara which give this village this name.

Guru Nanak Dev ji came to this village, during one of many of his journeys, which he undertook to learn and preach. It is a tradition of Sikhs to build gurdwaras to commemorate their gurus. So this gurdwara was also built following the same tradition. But I could not find when it was constructed. It is located at  31° 10' 2.03" N;  72° 22' 58.64" E.

Two young men greeted us, when we asked about the gurdwara. One of them lived in the building of the same gurdwara. His name was Imran son of Ghualam Mohammad. His family according to him migrated from Ambarsar (this is how a true Amritsari pronounces Amritsar), from a village Murad Pur. He runs a printing press. His friend also name Imran accopanied us. He works in State Life Insurance Company (thank God he did not try to sell us an insurance policy). His family also migrated from Jalandhar. Both were very friendly, cooperative and hospitable. True Pakistani Punjabi young men. 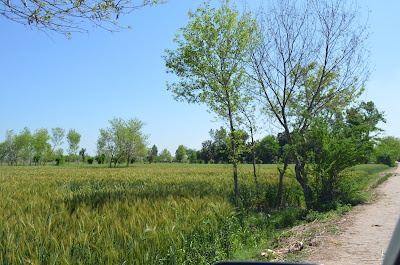 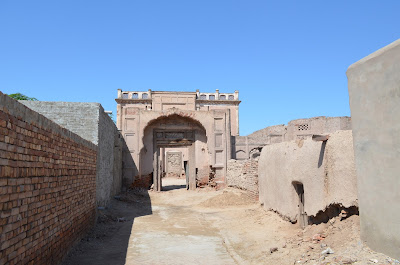 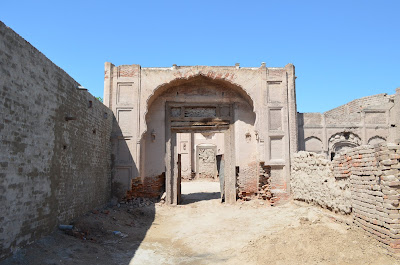 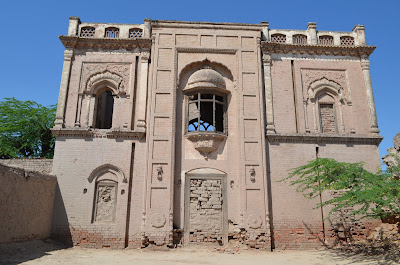 As can be seen in the above picture the entrance to the inner portions of the gurdwara is closed. So we went to another by lane and approached it from the hall, which exists at the backside of this deorhi. 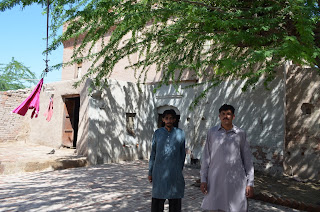 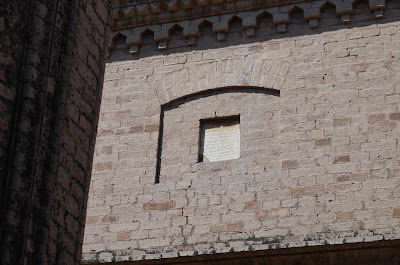 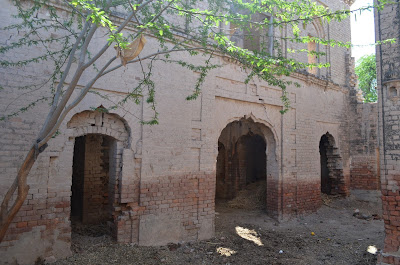 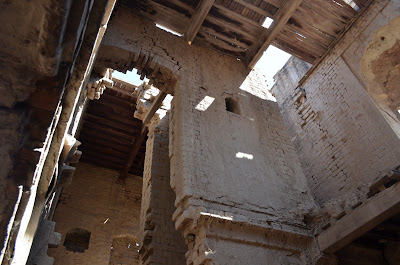 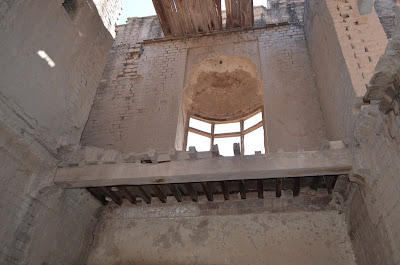 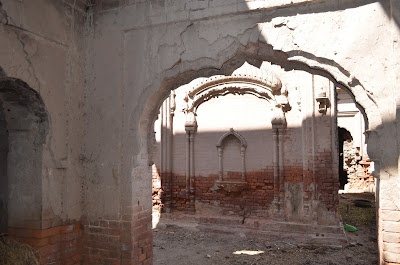 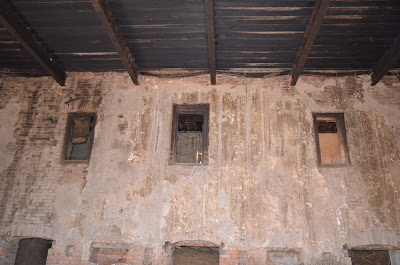 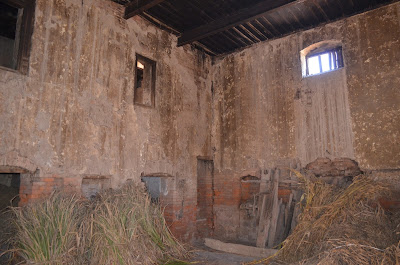 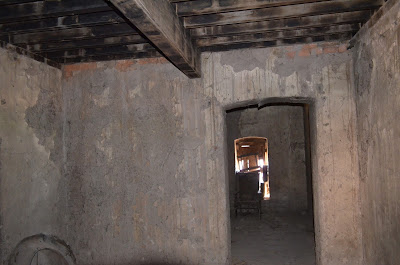 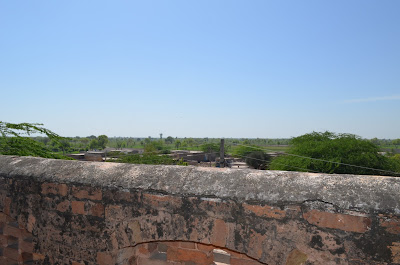 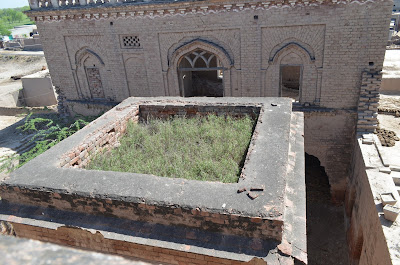 Nanaksar: View from the roof of the hall. The small square building and the deorhi from inside (22.03.2016.) In the above plaque, first of all the most important prayer of Sikh religion is written, which is called Mool Mantar. The words, transliteration and translation is given below:

I have copied the above mantar and its translation from www.sikhiwiki.org. However, please correct me, if I have made any mistake unintentionally. As I am not familiar with the gurmukhi script. Though I have a desire to learn it and soon I shall learn it. It was not easy to read the rest of the writing, as it written on a stone and some words are difficult to read or even missing. After the Mool Mantar some names etc. are given, who had this gurdwara constructed or participated in it.

I am afraid the above translation is not perfect. It was translated by Jagmeet Singh. But the greatest mystery is that the year of construction is given as 1454, which if we consider as Samvat, which the Sikhs use, that means 1398 AD. But that is impossible, because Guru Nanak himself was born in 1469 AD. Perhaps that's why Imran, the person whose family is currently living there, told me that it is five hundred years old. Perhaps one of the few Sikhs who still visit this place, told him so.

While reading the Mool Mantar, I could not ignore the striking resemblance it has with the Surah Al Ikhlas. We know that Guru ji, was a well educated man and had got his education from Muslim scholars also. He also learned Arabic and Persian. Even later in his life he always kept the company of Muslim ulema and sufis. 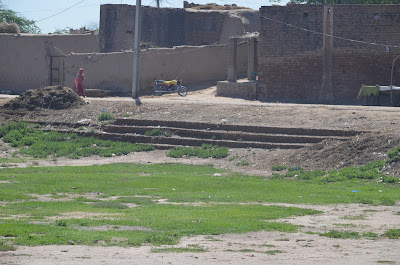 The above picture is very important. Because most probably it was also a part of gurdwara complex. Due to some reasons and time constraints, I could not enter it. It also shows some remnants of sarovar, the sacred pond. Below are a few pictures of a small structures just at the edge of the village. This structure was perhaps a part of the shamshan ghat (cremation ground). 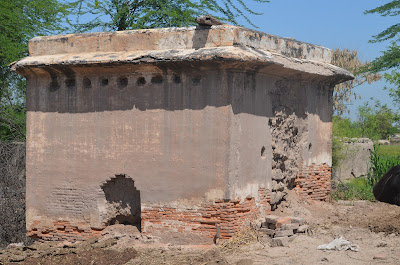 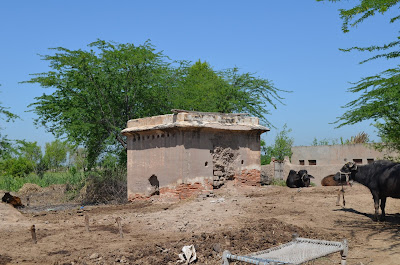 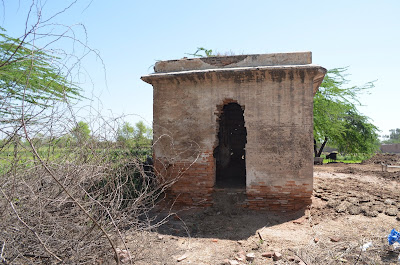 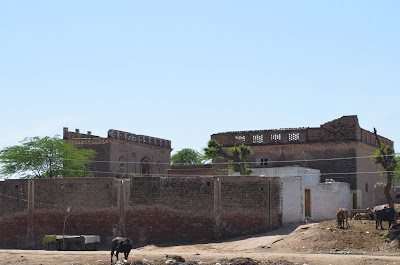 The building on the left side in the above picture was probably also a part of this gurdwara. It is located behind the main hall. I could not visit this building and took a picture from outside. So this is one of my those posts, which I consider incomplete. I hope somebody will shed more light on the history of this gurdwara.