About two-three years ago I read on the internet about a library in Jhelum city with the named after Lala Lajpat Rai. But no picture or details were given. So when I reached there on August 14, 2019, I was not sure what to find there, but was very happy to see a beautiful building of the library. Fortunately, it has been repaired recently, and was in very good condition. The library is located at  32°55'47.80"N, 73°43'55.42"E.

However, my high spirit got dampened temporarily when I found the library gate locked due to an official holiday for the independence day. I was looking around to find someone to help me or to find some way to somehow sneak into the compound, when a boy nearby told me of a man who had the keys. Luckily within a few minutes, I found the person, whose name, unfortunately, I have forgotten, and he was kind enough to open the gate for me.

The compound is enclosed in an iron railing and in front of that you can see the building painted in yellow and white. On top of the building, Lajpat Rai Library is written in Urdu, a little below Ladha Shah Hall is written in English, both in red paint. The building has a verandah with square arches and collonades. 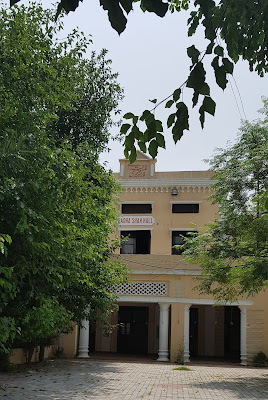 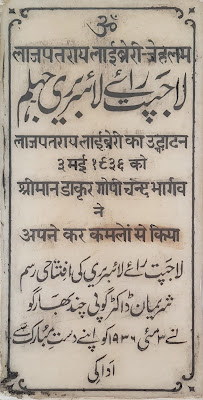 Mr Doctor Gopi Chand Bhargava
performed the opening ceremony of Lajpat Rai Libray,
with his blessed hands
on 3 May, 1936.

The above two plaques give some valuable information about the library. It was built in 1936 by Lala Guran Ditta Mal, in memory of his father Lala Ladha Shah Bindra. And it was named after famous politician Lala Lajpat Rai and was inaugurated by Doctor Gopi Chand Bhargav, another famous politician of his time.

I could not enter the main hall as the doors were locked. The caretaker told me that the renovation work was though almost complete, but the contractor had not handed over the building to the library. So the hall was empty of any books or furniture. So, I took a few pictures through the glass panels of the doors. The interior is very beautiful and has been renovated with great care and expertise. 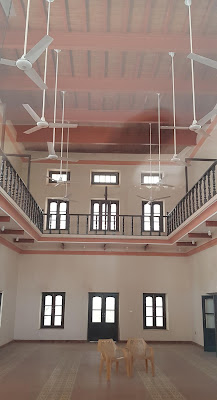 This library was named Lajpat Rai Libray. Lala Lajpat Rai was a political leader and member of Indian National Congress. He was born in 1865, at Dhudike in Moga district, now in the Indian state of Punjab. He studied law at the Government College Lahore. He became involved in politics from his college day. He was also an active member of Hindu Mahasabha and Arya Samaj. By 1920s he was one of the top political leaders of India.

In 1928, the British government set up a commission headed by Sir John Simon to report the political conditions in India. Indian political parties boycotted the commission. When this commission visited Lahore on 30 Ocotber, 1928, Lala Lajpat Rai led a peaceful demonstration against it. The Police resorted to baton charge to disperse the demonstrators. The superintendent of police James A. Scott personally assaulted Lajpat Rai and injured him severely. Due to these injuries he died on 17 November, 1928.

His death at the hand of police enraged public opinion and one young man, Bhagat Singh along with his comrades, vowed to take revenge. They plotted to kill Scott, to send a message to the British Raj. However, due to mistaken identity, another British officer John P. Saunders, an Assistant Superintendent of Police, was killed. Subsequently, Bhagat Singh was hanged in the same case.

Lala Lajpat Rai's legacy still lives on in Lahore, where the trust he established in memory of his mother Gulab Devi, built a tuberculosis hospital for women. This Gulab Devi hospital is still functioning and serving humanity. Below is given a picture of Lala Lajpat Rai and the picture of a plaque at Gulab Devi Hospital in Lahore. 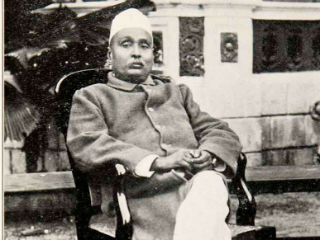 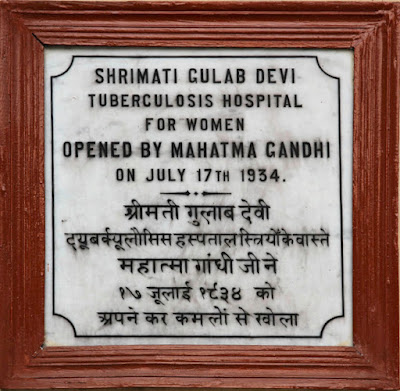 The person who opened this library, Doctor Gopi Chand Bhargava, was also a prominent personality of his days and a leader of the Indian National Congress. He was born in 1889 in Sarsa district and completed his M.B.B.S. degree from Medical College Lahore (now King Edward Medical College). After the independence, he became the first chief minister of Indian Punjab. Later on, he twice held this post. He died in 1966. 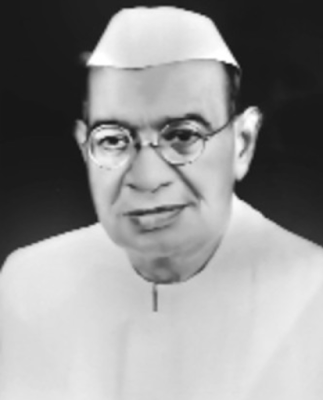 This library is probably now known as Iqbal library. Due to the renovation work, the administration had transferred the books to some other place. This library is an important historical landmark in Jhelum city and tells about its past. It is also kind of memorial to some important persons of that bygone era.