Bhera is one of the oldest towns in Pakistan. Its history goes back to more than a thousand years. It was an important city at the time of Sultan Mahmood Ghaznavi. Babur also attacked this town in 1519 and collected a ransom of Rs 200,000/- from its residence. It is interesting to know that until that time it existed on the right bank of the river Jhelum. But soon after the invasion of Babur, the hill tribes probably found a chance to loot and plunder it. They also destroyed it completely. After its destruction, Sher Shah Suri laid the foundations of the new town on the left bank of the river in 1540. Where it still exists. It soon regained its lost glory and during the Mughal period it was one of those few places where royal mint existed.

After the fall of the Mughal Empire, Ahmad Shah Abdali tried to establish himself in Punjab and to achieve his goal attacked several times. In 1757, Nuruddin Bamizai, one of his commanders, attacked and plundered the city with sword and fire. Two other towns of this region Miani and Chak Sahnu met the same fate. In this struggle between the Afghans and the Sikhs, to gain supremacy in Punjab, Sikhs ultimately succeeded and among many other areas, Bhera was conquered by them in 1767. Sikh rule lasted until 1849 when the British annexed the whole Punjab.

Bhera has many old buildings, including mosques, temples, gurdwaras and houses. It was a fortified town and its gates are still exist. The most important historical monument of the city is the mosque of Sher Shah Suri. You can find the details at the following link:

The subject of this mosque is Sheikhon Wali Masjid. A mosque though not as old and big as the mosque of Sher Shah Suri, but nevertheless, very old and a good piece of architectural art. 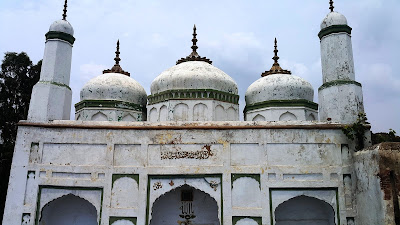 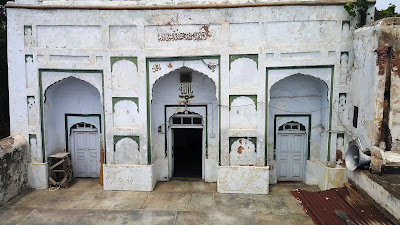 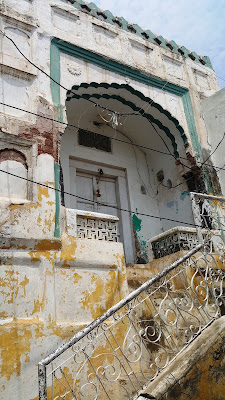 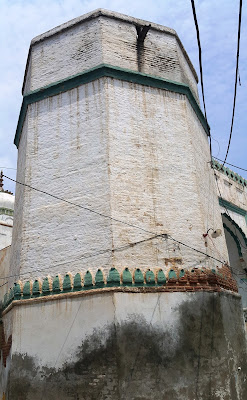 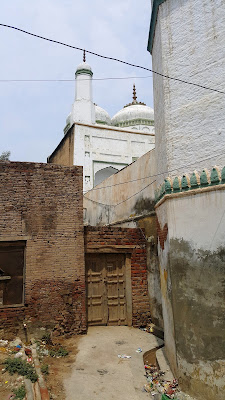 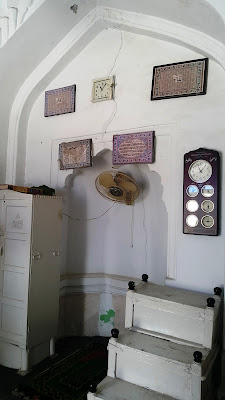 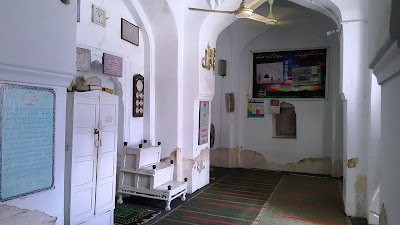 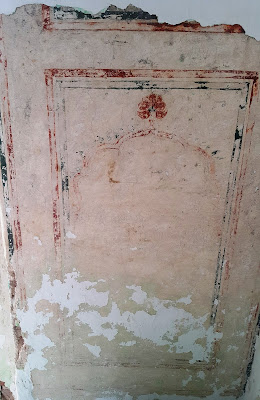 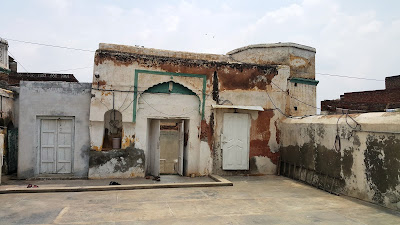 The above inscription is in Perisn, which roughly translates as : Gholam Hassan made donation to build this mosque and may God give him place in heavens. The year of construction is gives as 1216 AH. That corresponds to 1801/2 AD. It means that it is more than 2 hundred years old and was built during the reign of Maharaja Ranjit Singh.  There  was one more plaque in the mosque, which I could not read. It must be containing valuable information about the mosque and its history. 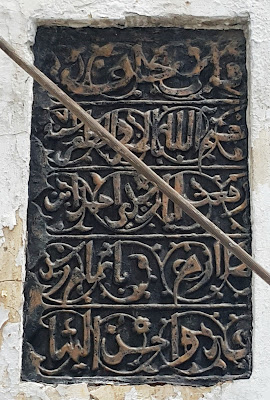 The locality where the mosque is located is called Sheikhanwala Mohalla. Sheikhs are a prominent family of Bhera. Unfortunately we could not meet any person of this family. The houses belong to this family are themselves are very old and are good examples of old architecture. The special thing about this locality is that according to the old traditional ways, it is an enclosed locality. With a big gate at the entrance. The area gives a distinct air of old times. The houses are in good condition and should be preserved. 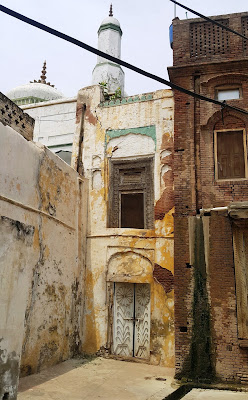 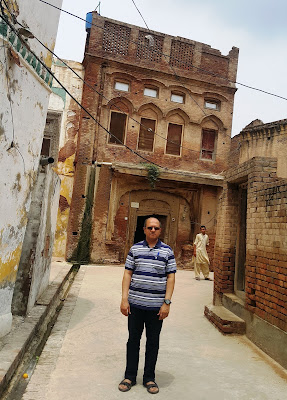 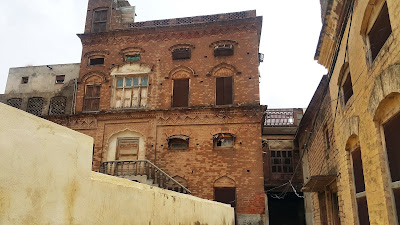 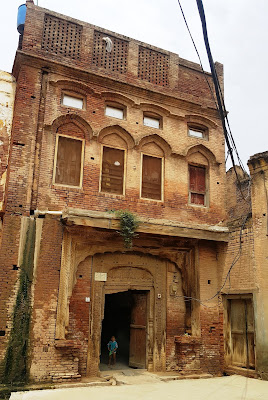 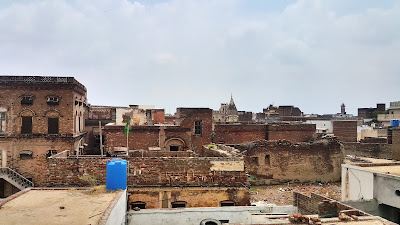 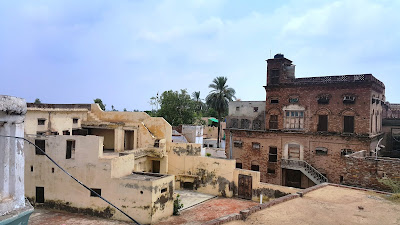 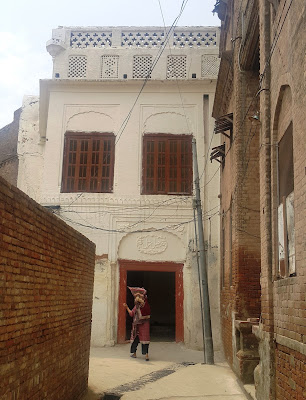 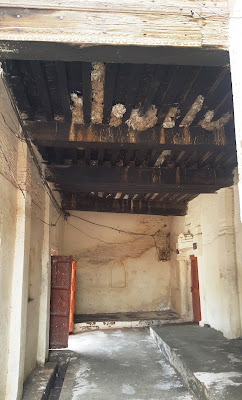 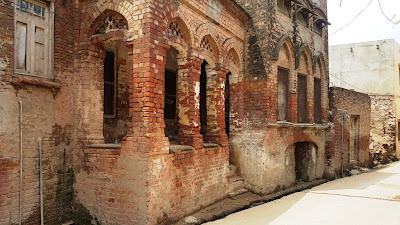 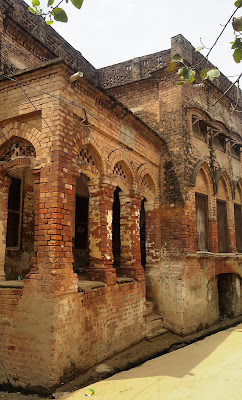 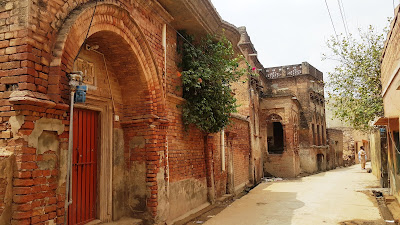 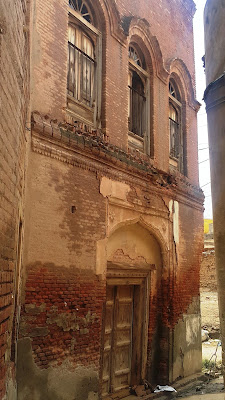 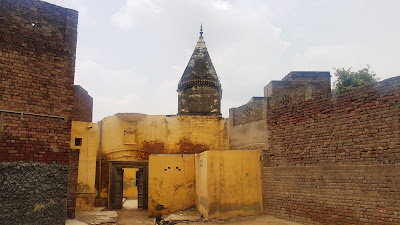 Mr Zulfiqar Ali Kalhoro, give the following account of this mosque:


The mosques of Khilji and Suri period still retain their old grandeur. The Khilji mosque in Sheikhawanwala Mohallah is noted for its monumental gate. According to another historian of the town, Prof Riaz Hussain, the mosque located in Sheikhanwala Mohallah was built by the Khiljis. But its architecture appears to be of Mughal period. It is likely that the mosque was rebuilt by the Mughals.

The mosque is noted for its elegant three domes and two turrets which add beauty to the structure. The façade of the mosque is now whitewashed but one can still see traces of the original decorative work on the walls particularly its main gate. The two octagonal towers on either side of the gate reflect the typical early Mughal style.
However, the local people associate this mosque to the Khiljis. The boundary walls of the mosque look like a fortress reflecting the typical Central Asian style of mosque building. The renovation work has damaged the original beauty of the mosque. Formerly, the mosque had a painted exterior. However, there are still some paintings inside the mosque.

Complete article can be read at: https://blogs.tribune.com.pk/story/4563/historical-mosques-of-bhera/

Bhera is a good example of old towns and with a little effort can be turned into a centre of tourism. Each and every street of the town has old and traditional houses. In addition to that its city gates are intact, has many mausoleums, temples and at least one big gurdwara. Obviously the temples and gurdwara are not in use and are occupied by locals as part of their residential buildings. However, the gurdwara is used as an Imam Bargah. A careful and systematic research will definitely uncover many more historic monuments.