Tomb of Abd un Nabi is a majestic building located in, ahm, somewhere in district Gujranwala, near a small village Kotly Maqbara at  32° 2' 0.81"N,  74°30' 39.27"E. It is situated in such a remote country side that even to tell its location is not easy. You can see the map given below to find its location. The huge tomb is a grand building standing tall in the green fields and visible from a long distance. Its sheer size and beauty of architecture is simply marvelous. I am surprised that such a lofty building has not drawn the attention it deserves and due to this negligence, it is fast approaching a stage when it would be difficult to repair or restore it. Already huge cracks have appeared in one of the four cupolas of the tomb. The main building is eroding at the lower parts.

When I approached the tomb I was awestruck by its sheer size and its location on such a vast plain, away from any big city or town. I had read that local people call it a work of jins and same story was told to me by three wandering boys lurking in and around the tomb. For a moment story seems credible. 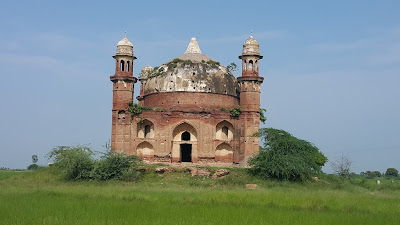 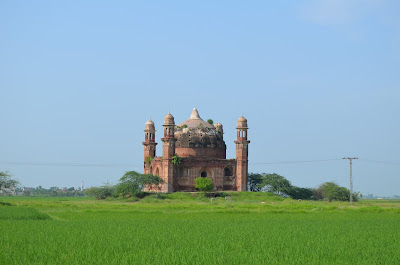 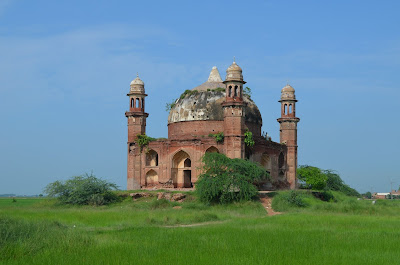 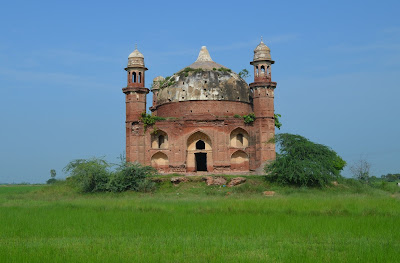 
Though it is clear from historical references that Abd un Nabi was a prominent courtier of Akbar, during the early decades of his rule. But it cannot be said with certainty that the same person is buried in this tomb. I found the following references about Abd un Nabi on the net, which I would like to share with you.

On 28 May, 2015, an article by Aown Ali was published in Dawn. It is a good article on Abd un Nabi and his tomb and gives following information:


This idea is based on the research of some of our renowned archaeologists, for example Ihsan H. Nadiem in an article on historic monuments in Gujranwala writes:

"The tomb is associated with Sheikh Abdul Nabi who was a tutor of the great Akbar. The Sheikh reached the status of Sadrus Sudur but was exiled to the holy places (Makkah and Madina) when the emperor was poisoned by Sheikh Faizi and Abdul Fazal."
"He was ordered not to return to his country unless called by the emperor. On receiving rumors of disturbed conditions in India under Akbar he, however, came back without the permission of the emperor and settled in Ahmadabad in Gujarat in 1583. He was, therefore, arrested by Akbar and sent to prison under the charge of his old rival, Abul Fazal.

"Another version tells of his having been murdered, while yet another attributes it was a natural death. But both accounts agree that it happened in 1584."

Furthermore, in the same article, the veteran archaeologist says that there is no dated inscription record about the monument yet the architectural features on comparative basis suggests it dates back to the early 17th century of Shahjahan’s rule (1628-1658).
However, the comparative historical notes suggest that Sheikh Abdul Nabi was imprisoned and died in Fatehpur Sikri in 1583. It seems strange that the body of a person who was oppressed by the emperor was shifted so far away, and for what reason? Why was he buried in this great wilderness, as it surely has been towards the end of 16th century when the sheikh died.

Our archeologists do not accommodate this query. But the historic record that we do have is a testament to the fact that Sheikh Abdul Nabi, the Sadrus Sudur, was buried in Narnaul in the Indian state of Haryana. This place is not too far from Fatehpur Sikri where the sheikh died while in prison. The other school of thought regarding the tomb relates it to the Diwan Abdul Nabi Khan who is said to be the governor of Wazirabad under Shah Jahan and Aurangzeb’s era. Dr. Saif ur Rahman Dar the archeologist and Salman Rashid the travel writer are leading on this thought. Dr. Dar even establishes that Diwan Abdul Nabi Khan was a tutor of the grandchildren of Nawab Saad Ullah Khan, the prime minister, under Shah Jahan. 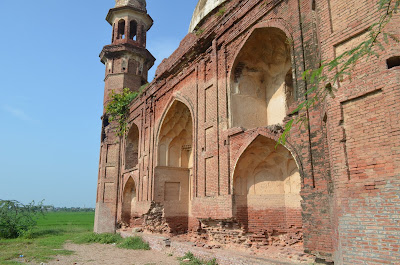 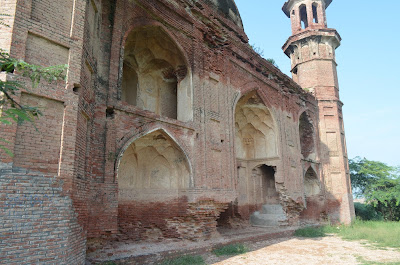 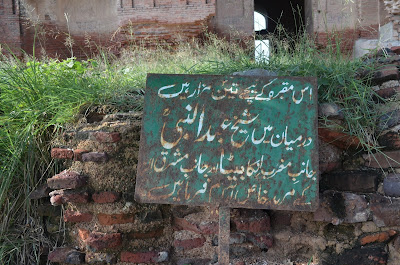 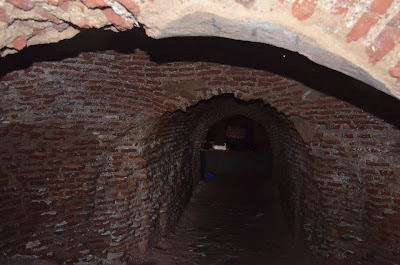 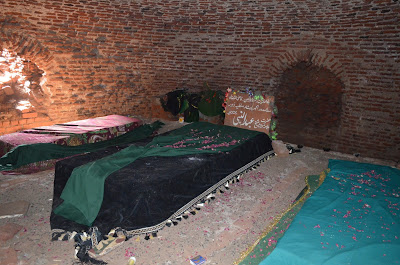 On the above link I found the following incidents about the life of Abdul Nabi. It shows that he was an important person in the court of Emperor Akbar.

The assemblies in the Ibadat Khan had been arranged by Akbar out of sincere religious zeal, but ultimately they were to drive him away from orthodoxy. This was partly the fault of those who attended the gatherings. At the very first session there were disputes on the question of precedence, and when these were resolved, a battle of wits started among the participants. Each tried to display his own scholarship and reveal the ignorance of the others. Questions were asked to belittle rivals, and soon the gatherings degenerated into religious squabbles. The two great theologians of the court, Makhdum-ul-Mulk and Shaikh Abdul Nabi, arrayed on opposite sides, attacked each other so mercilessly that Akbar lost confidence in both of them. His disillusionment extended to the orthodoxy they represented.
Shaikh Abdul nabi, although not personally accused of graft, is said to have had corrupt subordinates. He was a strict puritan, and his hostility toward music was one of the grounds on which his rival attacked him in the discussions in the House of Worship. The petty recriminations of the ulama disgusted the emperor, but probably a deeper cause for his break with them was an issue that is comparable in some ways to the conflict between the church and the state in medieval Europe. The interpretation and application of Islamic law, which was the law of the states, was the responsibility of the ulama. Over against this, and certain to come in conflict with it, was Akbar's concentration of all ultimate authority in himself. Furthermore, with Akbar's organization of the empire on new lines, problems were arising which the old theologians were unable to comprehend, much less settle in a way acceptable to the emperor.
One such problem brought matters to a climax in 1577. A complaint was lodged before the emperor by the qazi of Mathura that a rich Brahman in his vicinity had forcibly taken possession of building material collected for the construction of a mosque and had used it for building a temple. "When the qazi had attempted to prevent him, he had, in presence of witnesses, opened his foul mouth to curse the Prophet, …. and had shown his contempt for Muslims in various other ways." The question of suitable punishment for Brahman was discussed before the emperor, but, perplexed by conflict considerations, he gave no decision. The Brahman languished in prison for a long time. Ultimately Akbar left the matter to Shaikh Abdul Nabi, who had the offender executed. This led to an outcry, with many courtiers like Abul Fazl expressing the view that alghough an offense had been committed, the extreme penalty of execution was not necessary. They based their opinion on a decree of the founder of the Hanafi school of Islamic law. Abddul Nabi's action was also severely criticized by the Hindu courtiers and by Akbar's Rajput wives.


A similar incident is mentioned in a book Themes in Indian History by Raghunath Rai, in the following words:

The king (Akbar) listened to the view points of all the scholars and sometimes asked very intelligent questions. But he was much disgusted with the orthodox Muslims religious leaders like Makhdum ul Malik, Abdul Nabi and others as they showed obnoxious intolerance of another's views.


Again in another book titled Domesticity and Power in the Early Mughal World by Ruby Lal, our Abdul Nabi is not mentioned in good words:

One one occasion, even the Sadr (chief Judge) of the empire Shaykh Abd un Nabi has sought "protection from secluded ladies". Abd un Nabi was the grandson of Abdul Qaddus Gangohi, a great saint of his time. Akbar had appointed Abd un Nabi the Sadr of the empire but found cases of bribery and murder against him, and therefore gave his position to Sultan Khvajeh. Abd un Nabi was banished to Mecca. It was after his return that he sought refuge with the women. In due time Akbar gave orders for his arrest "in such manner that the ladies should not know of it."Abd un Nabi was later put to death: but it is interesting that Akbar had to do all this quietly, without crossing swords with the senior women of his haram.


Even his famous contemporary historian Abdul Qadir Badayuni, also seems to be not happy with the gentleman and his opinion is expressed in the following words:

Badauni not only has his complain only for Shias or Hindus, he too has reservations for many people fro among Sunni faith. Shaikh Abd un Nabi, the chief Sard, a bigoted Sunni is great target of him, in spite of his being good terms with Sadr, he related too many 'infamous' act of the Sardr.


The above information I took from the blog:
http://indianhistory4scholars.blogspot.qa/2009/04/mughal-historian-abdul-qadir-badauni.html 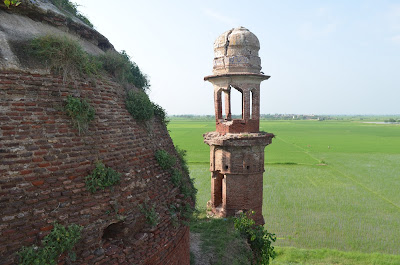 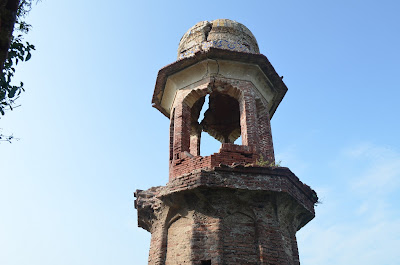 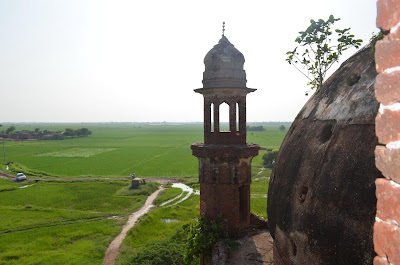 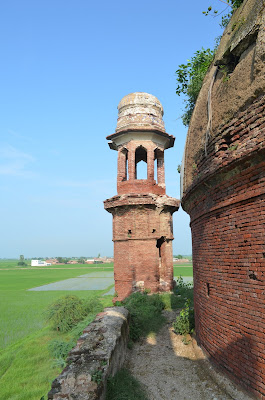 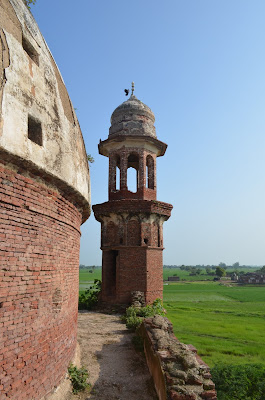 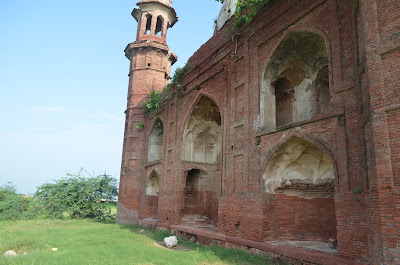 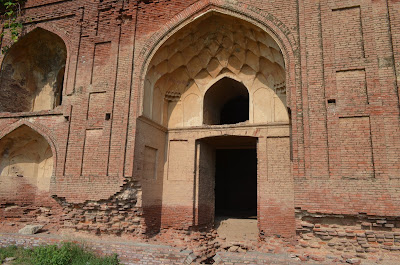 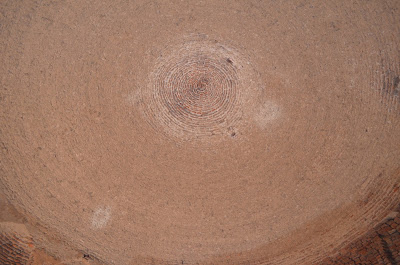 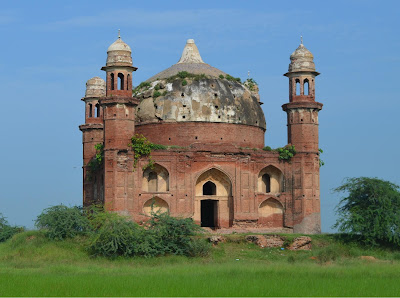 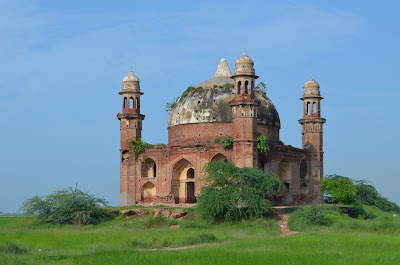 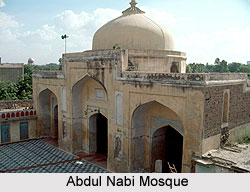 Approach to the tomb itself is not difficult as you can take a car close to the tomb. However, reaching Kotly Maqbara, a small village, is a difficult task. But once near the place, the tomb is visible from a long distance. However, with the help of google maps, one can reach there without much difficulty. I advise my readers, to consult the map given below.

You are welcome to share anymore information about Abd un Nabi or his tomb.