The countryside of Pakistan is dotted with many archaeological sites or buildings having historic, religious or cultural value. One such building is a beautiful mansion that exists in Kot Shera just outside the sprawling city of Gujranwala. This house was constructed by a big landlord of the area, Sardar Mangal Singh. The haveli is located at  32° 7'21.00"N;  74° 7'28.53"E.

Details about Sardar Mangal Singh are sketchy. However, before writing something about him, let us visit the mansion he built for himself. People told me that the haveli was barely complete at the time of partition in 1947 and perhaps construction was still in progress and even it was not fully furnished as yet. It also suffered some damage during the disturbances of 1947.

After the partition, as we know almost all Sikhs and Hindus had to leave this part of Punjab. The properties they left behind were distributed among the Muslim refugees coming from India. This haveli too was allotted or probably occupied by homeless refugees. Because it is improbable that anyone could claim such a huge property. Even today several families are living in different sections of the mansion.

I talked to a few persons in the Kot Shera and they informed me that the mansion was spread over an area of 40 acres, including a very big garden, stables, and houses for the employees of the Sardar. Currently, the mansion is situated in a thickly populated area, surrounded by a large number of ill-planned houses. As mentioned earlier the building itself is partitioned and is in use of several families living in different portions of this three storey building. The top floor was locked and we could not visit it. And our guide told us that that was the best-preserved part of this haveli.

The above three pictures I took from ground level. The place is so congested and lanes are so narrow that it is difficult to take a good picture. 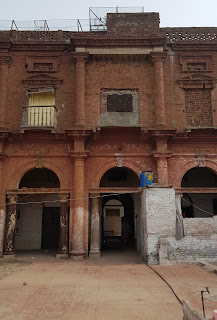 Most of the rooms are empty and in bad shape. The above two pictures show broken cupboards in two room on the first floor. (24.07.2018.)

A staircase leading to the 2nd floor. But we could not go upstairs as this section was closed and the owners were absent. (24.07.2018.) 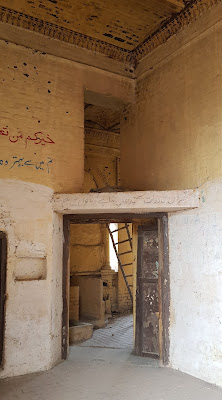 This picture was definitely the main entrance on the ground floor on the western side of the mansion. (24.07.2018.)


The whole building is so haphazardly partitioned that it is difficult to visit all the sections in a short time. But whatever we could saw was more than enough to give us an idea that how splendid this would be at the time of its completion. Now it is slowly crumbling as the current owners are simply not resourceful enough to maintain it properly and definitely legal problems also would be playing a role in preventing people from spending money on its repair and maintenance.

Now something about the builder, Sardar Mangal Singh. He certainly was a man of wealth and affluence and owner of a huge estate, reportedly spread over 12 villages. He probably was a close relative of the prominent family of Jhanda Butala Singh, a place 15 kilometers north-west of Kot Shera.

It was a coincidence that just two days before visiting this mansion I went to see a gurdwara at Mattoo Bhaike. In that gurdwara I found over a hundred plaques mentioning the names of those persons who made donations for the construction of that gurdwara. And one of them was about Sardar Mangal Singh. 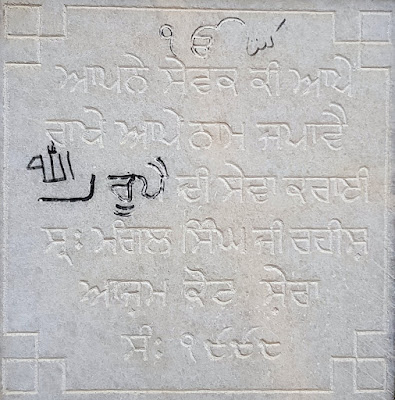 The above plaque introduces Sardar Mangal Singh as the Raees -e- Azam of Kot Shera, which can be translated as the richest man or lord of Kot Shera. The space for the amount donated had been left blank. So we do not know how much he contributed. Perhaps as one of the richest men in the area he was continuously supporting the efforts to construct the historically important gurdwara.

One cannot avoid feeling sad and disappointed to see that such a masterpiece of architecture has been left to decay into ruins, just because of our negligence and apathy. It is another example of how careless and negligent we are about of history and heritage. It is certainly too much to appeal to our archaeological department to protect and repair this building. It is strange that though people are generally well aware of the importance of such buildings, but collectively we are failing to preserve them, which are an important part of our history and heritage.