Ghanta Ghar of Faisalabad (The Clock Tower of Lyallpur)

According to the latest census of 2017, Faisalabad with a population of 3.2 million is the third largest city in Pakistan, biggest being Karachi and Lahore on the second place. But it is amazing to know that just a little over a century ago this city did not exist at all. Indeed Faisalabad is one of the youngest cities of Pakistan.

The British took control of Punjab in 1849, after defeating the Sikhs' Khalsa State in the same year. Later on, they embarked upon many projects to irrigate vast areas of Punjab, particularly more arid western Punjab. One of these ambitious projects was the development of Chenab Colony in the Sandal Bar, an arid and sparsely populated area between the rivers Chenab and Ravi. In connection with the development of Chenab colony, foundations of a new city were also laid down in 1898 (or 1896). This new city was to serve as the administrative and commercial centre of this vast colony. The city was named Lyallpur, after the Lieutenant Governor of Punjab, James Broadwood Lyall (1838 - 1916), who was closely involved in the development of this colony.

In my childhood, a few things quite fascinated me about Faisalabad. The first thing was its English sounding name. Though it had been changed from Lyallpur to Faisalabad in 1979, still in the early eighties, it was commonly referred to as Lyallpur (or more accurately Laelpur in our Punjabi accent). The second was, the city to be referred as "the Manchester of Pakistan" (in my Social Studies textbooks), for being the centre of the textile industry in Pakistan. And the third was the Ghanta Ghar or the clock tower, its most famous landmark.

During the last three decades, I passed many times through Faisalabad, always going to or returning from somewhere. Once or twice I even had a glimpse of the tower as well, but never saw it from a close distance. That wish was fulfilled on 21 July, 2017. It was a Friday and most of the shops were closed, that provided us an opportunity to see it more peacefully. The first impression was that I found it bigger and more beautiful than my imagination. Obviously, the city administration has taken a good care of the tower and the surrounding bazaars. The tower is located in the centre of the city at  31°25'7.13"N;  73° 4'44.94"E. 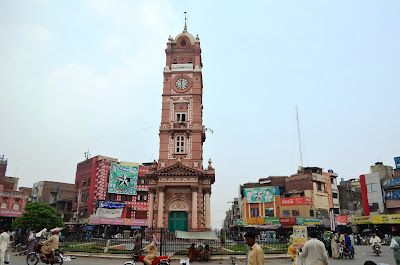 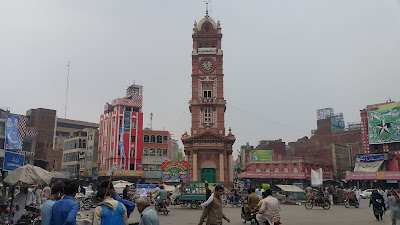 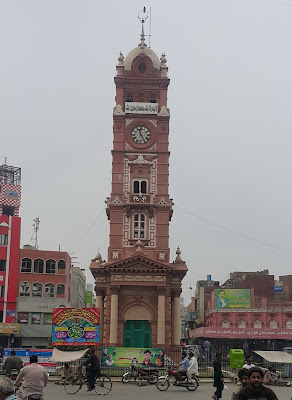 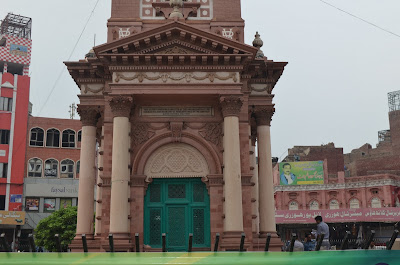 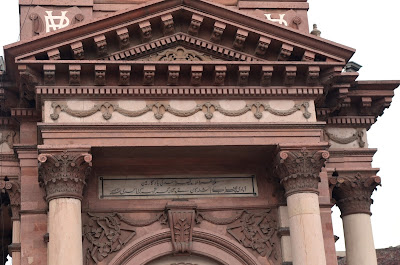 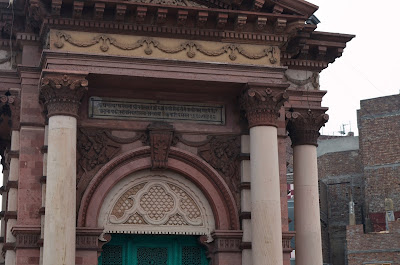 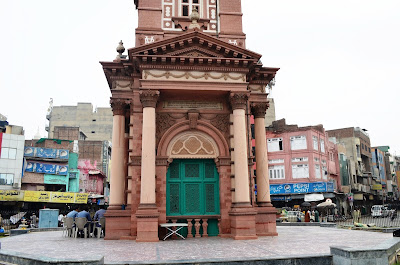 The fourth inscription on the tower is in Gurmukhi.

All the four writings are not exactly the same. They essentially carry the same information but convey different emotions. Inscription in English is formal and in Urdu it is terse.  However, Hindi and Gurmukhi writings call the queen to be "in heavenly abode" and "merciful", respectively.

As the above inscriptions in English, Urdu, Hindi and Gurmukhi show that tower was built during 1903-05, in honour of Queen Victoria, who died two years earlier in 1901. It also shows the religious and cultural diversity of that time. It was constructed in the centre of the main bazaar. The bazaar and the tower were designed by Poham Young (Wikipedia). The design was based on the Union Jack the British Flag.

The city was developed as a Mandi Town, the main centre for trade and administration of the Chenab Colony. Eight bazaars emerge from the tower which are, Rail Bazaar, Katchery Bazaar, Bhawana Bazaar, Jhang Bazaar, Aminpur Bazaar, Karkhana Bazaar, Chiniot Bazaar and Montgomery Bazaar.

Before 1947, the city was culturally and religiously a much more diverse place, as the table given below shows. 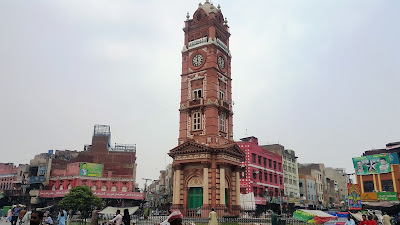 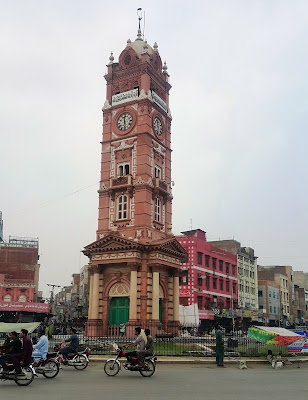 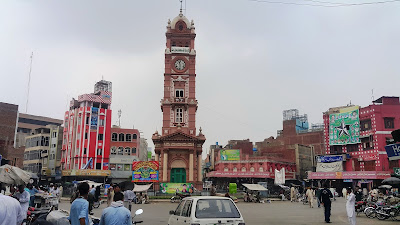 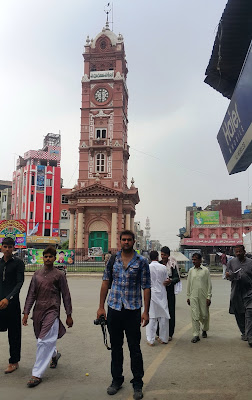 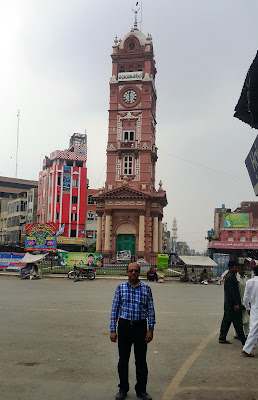 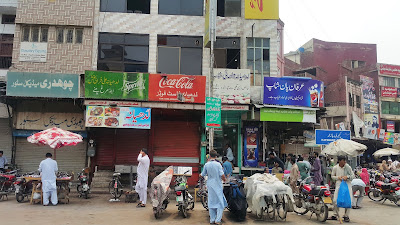 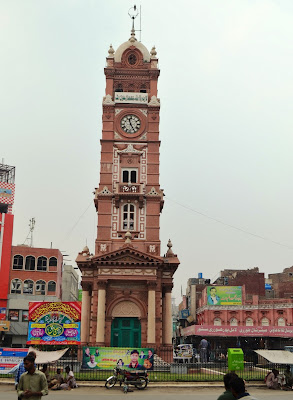 The following website gives some information about the history of Faisalabad:

The city of Faisalabad is not more than a century old. Just hundred years back this region was the center of keeping livestock. This city was irrigated in 1892 when Jhang & Gogera branches were supplied water. The foundation of first ever-residential area was laid in 1895. Its main purpose was the construction of a market. During those days, the area across the river Chenab was called Sandal Bar. Before the establishment of Lyallpur City the ancient residential area was called Pakka Marri now known as Pakki Marri (1). It became headquarters of the Lower Chenab Colony and in 1898 was incorporated as a municipality.

The caravans used to stay at this place while traveling from Jhang to Lahore. The English travelers of those times wanted to convert this area into a city. In the beginning the small establishment was called Chenab Canal Colony which was later named Lyallpur after the name of Governor of Punjab Lt. General Sir James B Lyall.

Its most distinguished feature (now indescribably filthy (2)) is the town center which was laid out patriotically by Sir James Lyall in the shape of the British flag----a rectangle containing a cross and two diagonals. At the center is a clock tower where eight roads meet. These eight segments form the town's main bazaars. It is also called the city of eight bazars, which emerge from clock tower and laid out in the shape of the Union Jack (British Flag).

In 1910, the famous and oldest Chenab Club was constructed. There, British rulers used to spend their evenings to entertain themselves with drinks & music. In 1908, Punjab Agricultural College and Khalsa School were opened. Later Khalsa School was upgraded as Khalsa College, which is now called Municipal Degree College. The first railway started in 1910. The first residential area was Douglas Pura established in 1920. Industrialization was started in 1930. The project of Lyallpur Cotton Mills was completed in 1934. With the establishment of Pakistan as the population increased the city also expanded. When Pakistan came into being the area of this city was 3 sq. miles. Now it is more than 10 sq. miles. New residential areas were established like Peoples Colony, Ghulam Muhammadabad, Lahore colony, Afghanabad, Jail road etc.

The foundation of Lyallpur was laid in 1896. Its famous clock tower was built on a well. The decision of its construction was taken by the then Jhang deputy commissioner, Capt Beke. Sir James Lyall laid its foundation stone on Nov 14, 1903.

The well, which formerly existed at the exact location of the Clock Tower, was filled with earth brought from the farms of Chak Ram Dewali (3) on the Sargodha Road. The stone used in its construction was brought from the Sangla Hill (4), about 50 kilometres from here.

The Clock Tower stood in two years at a cost of Rs.40,000 (5) after which a function was arranged to celebrate its completion. The then Punjab financial commissioner, Mr Louis, was the guest of honour.

The construction of this clock tower was completed in 1906 under the supervision of Gulab Khan who belonged to the family who built Taj Mahal in Agra. The clock was brought from Bombay. It is believed that the clock tower was built in the memory of Queen Victoria who had died 80 years earlier. By the time this tower was built the eight bazaars were already operational.

The map of Faisalabad is just the copy of British flag Union jack designed by an architect Desmond Yong. However, the real design on which this city is planned was of Sir Ganga Ram, who was a famous town planner of his time. The total area of 110 sq. acres was used to build eight bazaars & clock tower in a round shape. All these eight bazaars are connected with each other through another bazaar, which is called Goal Bazaar.

Although the Clock Tower is in good shape and does not require repairs from outside even at the age of 100 due to fine quality of material used in its construction, its interior needs immediate attention of the authorities concerned.

At the time of its construction, fountains had been installed in front of four bazaars - Aminpur Bazaar, Katchery Bazaar, Karkhana Bazaar and Jhang Bazaar - which were visible from all the eight bazaars. However, two of the fountains have now disappeared.

However, the plaster of the Clock Tower has started decaying and cracks have appeared on stairs inside and outer pillars. The railing has been broken and roofs have become a shelter for birds. Pedestals inside the tower are in bad shape. Moreover, visitors to the tower are shocked to see its fading stones, crumbling base-pad and dust all around.

2. It was written on February 6, 2012. But during my visit, I found the place very neat and clean and with good well-constructed roads all around.

5. Wikipedia gives the following account of the resources gathered to finance this project:


The foundation of majestic Clock Tower was laid on 14 November 1903 by the British lieutenant governor of Punjab Sir Charles Riwaz and the biggest local landlord belonging to the Mian Family of Abdullahpur. The fund was collected at a rate of Rs. 18 per square of land. The fund thus raised was handed over to the Municipal Committee which undertook to complete the project.

The Ghanta Ghar of Pakistan is undoubtedly the most beautiful Clock Tower in Pakistan. It is not just a symbol of Faisalabad, but also of a by-gone era. It was built during the height of the British Empire in the memory of one of the Britain's greatest monarchs in their two thousand years history. Its four sides, with inscriptions in four different languages, reminds of a culturally rich and diverse society in the past, when the country was ruled by the British and Muslims, Hindus and Sikhs co-existed peacefully. I could not describe the architecture of the tower. I hope somebody will share its architectural aspects with us.