While travelling on Islamabad - Lahore Motorway, M2, you may have seen a big board, close to Balkasar Interchange, informing you about a man, who in the words written on the board was "The First Muslim Recipient of Victoria Cross". The statement though correct, is actually a little bit misleading. He was not just the first Muslim recipient of Victoria Cross, but also the first Indian to receive this most prestigious military decoration of the British Empire. Seven Muslim soldiers of British Indian Army won this highest award for bravery. Five of them from Punjab and two of them were from Khyber Pakhtunkhwa. I already have written a post about Shahamad Khan of Takhti, who also won the Victoria Cross.


Subedar Khudadad Khan was born in Dab, a small village just 3 kilometers south east of Chakwal on Chakwal - Sohawa road, on 28 October, 1888. At the start of the WWI he was a Sepoy in 129th Duke of Connaught's Own Baluchis, now the 11th Battalion of Pak Army's Baloch Regiment. Nearly 1.3 million Indians served in the British Army during WWI and the largest proportion of them came from the Rawalpindi Division. Khudada Khan was one of them. But one thing distinguished him from all of them and that was winning a Victoria Cross by displaying extraordinary bravery while fighting Germans in Belgium.

Victoria Cross is the highest military decoration of the British Empire. It is awarded for "the most conspicuous bravery, or some daring or pre-eminent act of valour or self-sacrifice, or extreme devotion to duty in the presence of the enemy." This was introduced by Queen Victoria in 1856 and since has been awarded to 1355 individuals. 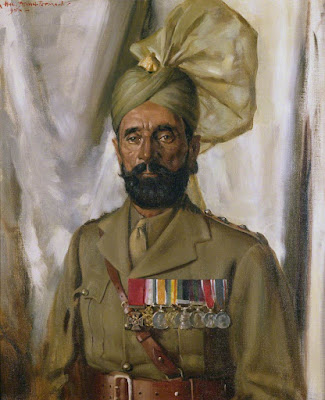 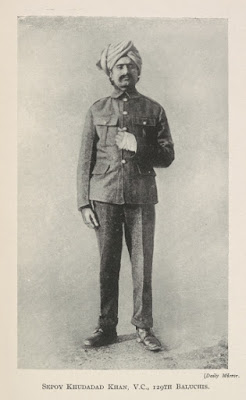 Details of his action, which won him Victoria Cross, are described as under at:
http://www.victoriacrossonline.co.uk/khudadad-khan-vc/4587318329.

In October 1914, the Germans launched a major offensive in northern Belgium, in order to capture the vital ports of Boulogne in France and Nieuport in Belgium. In what came to be known as the First Battle of Ypres, the newly arrived 129th Baluchis were rushed to the frontline to support the hard-pressed British troops. On 31st October, two companies of the Baluchis bore the brunt of the main German attack near the village of Gheluvelt in Hollebeke Sector. The out-numbered Baluchis fought gallantly but were overwhelmed after suffering heavy casualties. Sepoy Khudadad Khan’s machine-gun team, along with one other, kept their guns in action throughout the day; preventing the Germans from making the final breakthrough.

The other gun was disabled by a shell and eventually Khudadad Khan’s own team was overrun. All the men were killed by bullets or bayonets except Khudadad Khan, who despite being badly wounded, had continued working his gun. He was left for dead by the enemy but despite his wounds, he managed to crawl back to his regiment during the night. Thanks to his bravery, and that of his fellow Baluchis, the Germans were held up just long enough for Indian and British reinforcements to arrive. They strengthened the line, and prevented the German Army from reaching the vital ports. For his matchless feat of courage and gallantry, Sepoy Khudadad Khan was awarded the Victoria Cross.

The same website tells us that Khudadad Khan received his Victoria Cross from King George V on 26 January 1915. He received many other medals for his service in the army. In addition to that, he received 50 acres of land in Chak No. 25, near Rukkan, in district Mandi Bahauddin. After the retirement, he lived in the same Chak and died and buried there on 7 March, 1971. 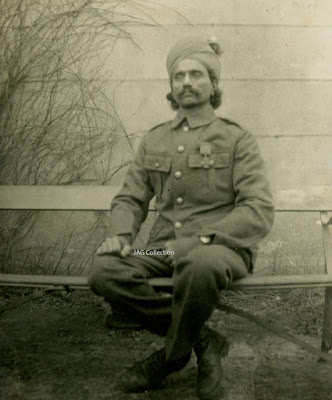 Sepoy Khudadad Khan, 129th Duke Connaught’s own Baluchis, was the first Indian—and Muslim—to be awarded the Victoria Cross. This photograph was taken while he was recovering from his wounds at an Indian convalescent home at Barton-on-Sea. (http://www.militarytrader.com/jagfile/a-halloween-tale) 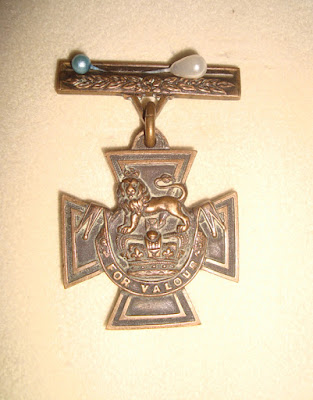 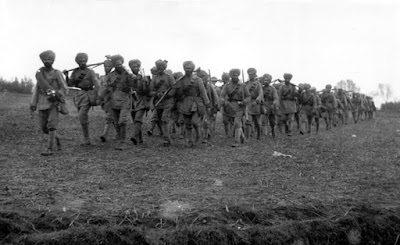 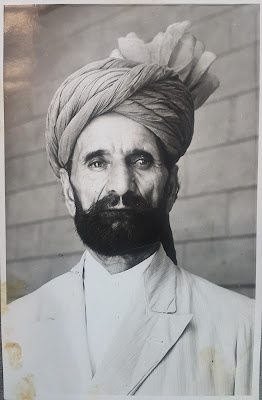 Subedar Khudadad Khan. (A picture provided by his family) 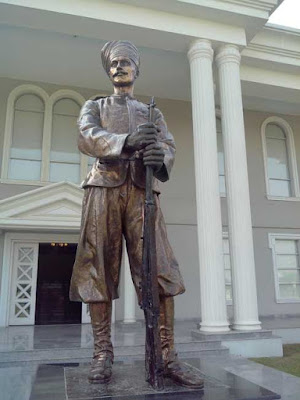 A statue of Subedar Khudadad Khan in front of the Army Museum, Rawalpindi. (Pininterest)

My desire to visit and discover his grave was fulfilled on 24.03.2016, when I visited Chak 25. The grave itself is about one kilometer north east of the Chak. However, I was a little disappointed to know that his family had shifted from the place, back to their native Chakwal and they also had sold his agricultural land. Now my next plan was to visit his ancestral village of Dab. 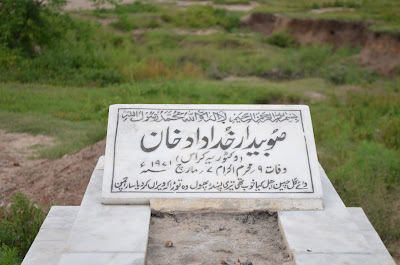 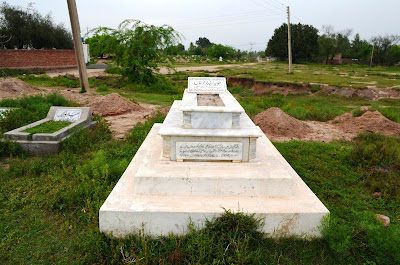 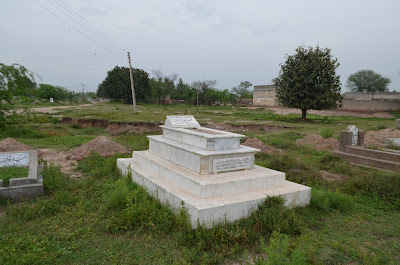 It took me another year and a half to finally get a chance to visit Dab, the birthplace of Subedar Khudadad Khan. It was a rainy day, but the weather in Dab was pleasant. I reached his home around 1100. Like many other villages in Chakwal, it is a prosperous village with well built houses and neat and clean. A young man opened the door for us and informed that no male member of the family was at home. However, after checking inside and asking about the purpose of our visit he led us inside. There a was a lady who welcomed us into the drawing room. 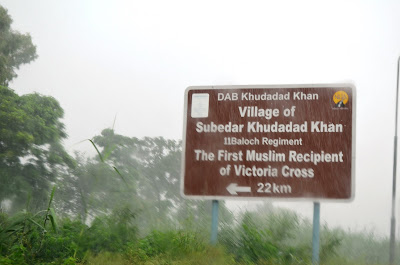 A board on M2, near Balkasar Interchange, telling the direction to Dab, the birthplace of Subedar Khudadad Khan. I took this picture on 28.07.2017, during a heavy downpour. 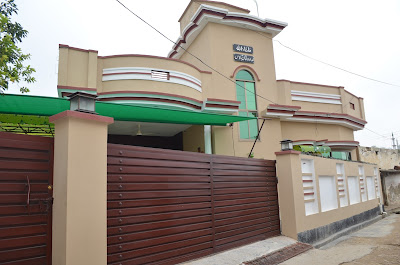 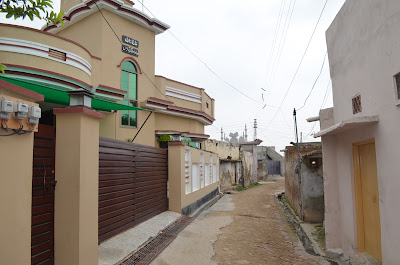 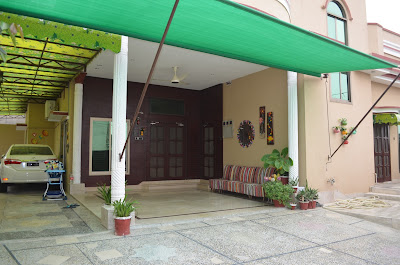 An inner view of the beautiful house of grandson of Subedar Khudadad Khan. (28.07.2017) 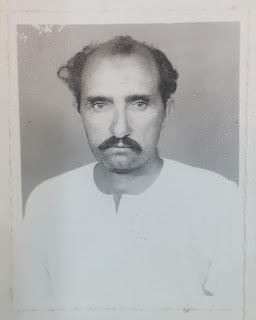 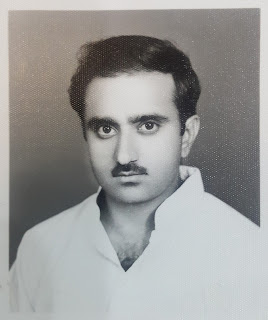 I could not meet him then, however later I talked to Ali Nawaz, grandson of  Khudadad Khan, two or three times and also exchanged message through whatsapp. I wanted to know the location of his grandfather's Victoria Cross. But he could give me no satisfactory answer. However, during my research on the net, I found that the Victoria Cross in question is at the moment on exhibition in Imperial War Museum, London. 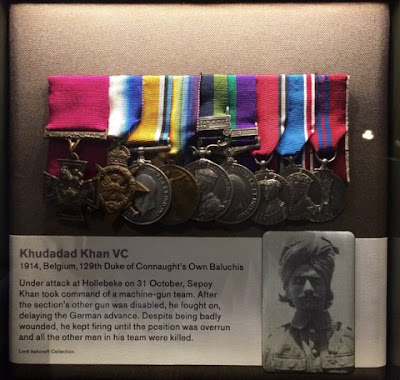 The following link gives the list of Victoria Crosses on display in Imperial War Museum, London, including the Medal of Khudadad Khan:
http://www.victoriacrossonline.co.uk/imperial-war-museum-london/4588853536

He was awarded many other medals for his distinguished service in the army. Details are given on the following site:
http://www.victoriacross.org.uk/bbkhkhan.htm 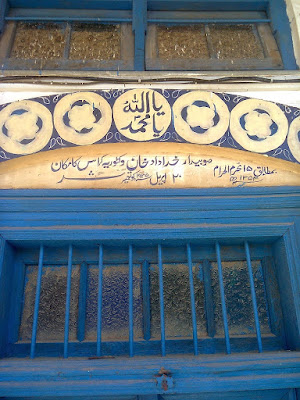 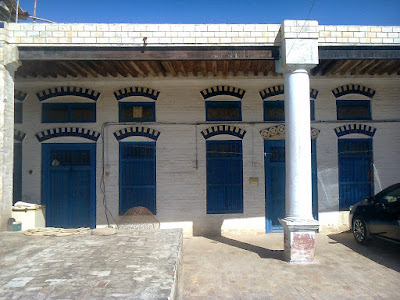 The above two pictures are of the house that was originally built by Subedar Khudadad Khan by himself in 1935. It was torn down two or three years ago and a new house was built at its place. I asked his grandson Ali Nawaz the reason for not preserving the old house. He explained to me that due some changes in the surrounding area, due to the construction of new roads, at a higher elevation, the drainage was no longer possible. Moreover, they repaired the house a few times, but it was not easy to preserve it.

Lord Ashcroft is a British businessman and politician. He has a very big collection of Victoria Crosses, which are on display at Imperial War Museum London. The Victoria Cross of Subedar Khudadad Khan is one of them.  On his website, he writes in detail about Khudadad Khan:

In 1917, Khan was promoted to jemadar and the following year he was elevated to senior jemadar. He survived the war and, in 1919, was promoted to subadar, his final rank. After retiring in 1921, he worked as a farmer and, in 1956 and by then aged 68, he took part in the VC centenary celebrations in London.

Khan, who was married twice and had two sons and a daughter with his second wife, died at the Military Hospital, Rawalpindi, Pakistan on March 8 1971, aged 82. He was buried at Rukhan Tehsil cemetery, Punjab, Pakistan.

His name is engraved on the Memorial Gates, Hyde Park Corner, London, and there is a statute in his honour at the Army Museum, Rawalpindi, Pakistan.

For a time, Khan’s medal group was on display at the Army Museum in Rawalpindi but it remained in the ownership of one of his descendants. When this individual decided to offer the medal group for sale, I was able to secure it in a private deal.

The above mentioned deal was struck in 2016. So now, all that is remaining of this proud piece of our history and heritage is a grave near Chak No. 25, Mandi Bahauddin and a board telling about the direction of Dab, near Balkasar Interchange.