Rawalpindi was an important military station during the British Raj, due to its proximity to north western frontier, and the headquarters of the Northern Command of the British Indian Army. After the defeat of Khalsa Raj in 1849, this area came under the British rule. After the independence the city was made the General Headquarter of Pakistan Army. Hence it is also known as garrison city.
Rawalpindi, due to its long association with military, has many installations, buildings and monuments related to the armed forces. One of them is Lockhart Memorial in Roomi Park, in the Sadr Area. It was built in the memory of General Sir William Stephen Alexander Lokchart GCB, KSCI, who was a British General in the British Indian Army. He was born in Scotland in 1841 and died in Calcutta in 1900. During his career he served in the army with distinction. He also served as the commander in chief of the Punjab command. In 1898 he was made the commander in chief of the British Indian Army.
He died in 1900 and his colleagues and admirers set up a memorial in his memory at Roomi Park in Rawalpindi. An obelisk, is a tall, four sided, narrow tapering monuments which ends in a parymid like shape. An obelisk is an invention of ancient Egyptians and they made huge obelisks all over their country. In Pakistan, as far as I know, there are at least three obelisks, at Multan, Margalla pass and this one. The location of this obelisk is at  33°35'57.31"N,  73° 2'36.11"E.
Lockhart Memorial, Roomi Park, Rawalpindi. (28.01.2022) 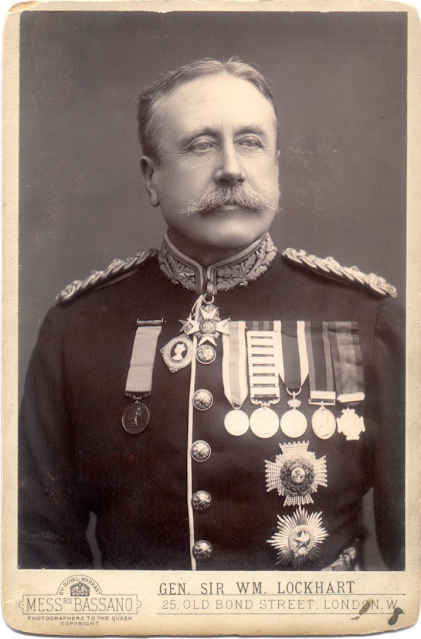 Another view of the memorial. (28.01.2022)
GENERAL SIR WILLIAM STEPHEN ALEXANDER LOCKHAR GCB, KSCI
WHO DIED IN CALCUTTA 18TH MARCH 1900
WHEN COMMANDER-IN-CHIEF IN INDIA
ERECTED TO HIS MEMROY
BY THE ARMY IN INDIA AND MANY FRIENDS, 1903.
The Lockhart memorial in Roomi Park, Rawalpindi. (28.01.2022)
The memorial is located in a park, covering an area of approximately 3 acres. It is a beautiful and a popular recreation place in Rawalpindi.

It is an important historic memorial, and its significance also lies in the obelisk being one of just three obelisks in Pakistan. The biggest of all the three is, however, the Nicholson Monument at Margalla Pass. But few people know about its existence and fewer still give it any attention.
Tariq Amir
June 26, 2022.
Doha - Qatar
Posted by Tariq Amir at 21:42