120 - The Grave of Shah Shuja in Dharema (district Sargodha)

Dharema is a small typical town of Punjab in district Sargodha about 10 kilometers from Sargodha city on Shahpur road. There is nothing significant about it except the one fact that there is a grave that attracts the attention of many students of history. This grave is said to be that of Shah Shuja a Mughal prince and a brother of the Mughal Emperor Aurangzeb. This grave is located inside the mausoleum of a saint Mian Habib Sultan Nangiana, who died in 1088 AH, which corresponds to  1677 AD. His mausoleum is located at 32° 9'19.97"N, 72°35'37.31"E.

Shah Shuja was born in 1616 in Ajmer. Emperor Shah Jahan and his wife Mumtaz Mahal had four sons, Dara Shikoh, Shah Shuja, Aurangzeb and Murad Bakhsh. Dara Shikoh was the eldest and the favourite of his father and was also made heir apparent by him. In 1657 the health of Shah Jahan declined and rumours spread about his death. This was a signal to his sons to start their struggle to capture the throne of Delhi, in line with the traditions of the Mughals. The four brothers were holding important positions in the four corners of the Empire, Dara Shikoh in the north in Delhi, Shah Shuja in the east in Bengal, Aurangzeb in the south in Deccan and Murad Bakhsh in the west in Gujrat. All the four made their advances towards Delhi and fought one of the most famous civil wars in the history of India. We all know that eventually, Aurangzeb won this desperate and bloody struggle between the real brothers and all the three losers lost their lives.

Aurangzeb killed his two brothers Dara Shikon and Murad Bakhsh in captivity. However, the fate of Shah Shuja is not certain. He twice attempted to march on Delhi. In the first attempt, he was defeated by Dara Shikoh near Banares in May 1658 and retreated towards Bengal. He made the second attempt in January 1959, this time against Aurangzeb, who in the meantime had defeated Dara Shikoh. Shah Shuja failed again and again took shelter in Bengal. But this the army of Aurangzeb was on his hot pursued and after many battles, he decided to leave Bengal and take shelter in Arakan, a region in the present day Myanmar. He arrived with his family and entourage in Arakan in August 1660. His plan was to migrate to Makkah to spend his life in peace with his family. But fate had something else in store for him. The immense wealth he was carrying with him became a big source of trouble for him. The ruler of Arakan made his life miserable and he met a tragic end. The following account is given on Wikipedia about his last days.

Shuja and his entourage arrived in Arakan on 26 August 1660, and were greeted at the capital, Mrauk U, with courtesy. The Arakanese king, the powerful Sanda Thudhamma, had previously agreed to provide ships for Shuja and his family to travel to Mecca, where the prince had planned to spend the remainder of his life. The half a dozen camel-loads of gold and jewels that the Mughal royals had brought with them was beyond anything that had previously been seen in Arakan.

After eight months and numerous excuses however, Sanda Thudhamma's promise of ships had not materialised. Finally, the latter demanded the hand of Shuja's daughter in marriage, which the prince refused. Sanda Thudhamma responded by ordering the Mughals to leave within three days. Unable to move and being refused provisions at the bazars, Shuja resolved to attempt to overthrow the king. The prince had two hundred soldiers with him, as well as the support of the local Muslims, giving him a good chance of success. However, Sanda Thudhamma was forewarned of the coup attempt. Shuja was therefore forced to set fire to the city in the hopes of cutting his way out in the confusion. Much of his entourage was captured, and though he himself initially escaped into the jungle, he was later captured and executed.

Shuja's wealth was taken and melted down by Sanda Thudhamma, who took the Mughal princesses into his harem. He married the eldest, an event that was subsequently celebrated in song and poetry. The following year however, suspicious of another coup, Sanda Thudhamma had Shuja's sons decapitated and his daughters (including the pregnant eldest) starved to death. Aurangzeb, angered by the deaths, ordered a campaign against the kingdom. After an intensive siege, the Mughals captured Chittagong and thousands of Arakanese were taken into slavery. Arakan was unable to return to its previous dominance and Sanda Thudhamma's eventual death was followed by a century of chaos.

It is generally believed that he died on 7 February 1661. But nobody knows about his grave. However, there is one grave in Dharema, the tombstone of which carries his name. And that is the second part of our story. 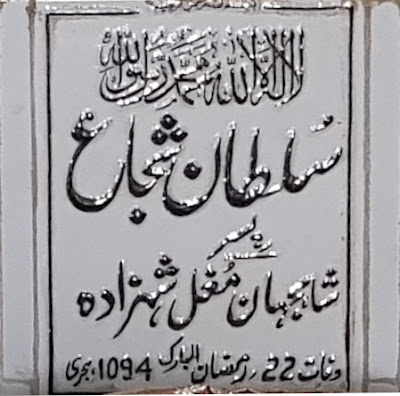 Now the story goes that somehow Shah Shuja survived all the calamities fell on him and his family and reached this little known place and spent the last two decades of life praying and serving the holy man living at this place. But it defies all the reason and logic that a hotly pursued man reached all the way from Arakan to Dharema, almost 2,500 kilometers away, passing through the heart of the empire of a brother who was thirsty for the blood of any claimant to the throne.  It is also difficult to imagine that he remained hidden from the spies of an energetic ruler like Aurangzeb. It is also difficult to expect from Aurangzeb, who never forgot or forgave, to let him live in peace. So it cannot be said with certainty that who was this Sultan Shuja and how he became famous to be a Mughal prince. Perhaps similar names caused some confusion and later on, a legend grew and spread in the region. Anyway, it is an interesting subject for those who have an interest in history.