General elections were held in Pakistan on July 25, 2018, after the last assembly elected in 2013, completed its term in May, 2018. It was a milestone in the political history of Pakistan in the sense that since 2008, these were the third general elections that were held on time. This will certainly help in consolidating civilian constitutional rule in Pakistan.

My purpose of this post is only to share the maps  that I have created to show the results of the National Assembly of Pakistan. Thus I have avoided any kind of comments on the process of elections or the interpretation of the results. That I shall leave to my readers.

Before going to the results I would like to present the following table to my readers, to explain the number of voters and seats distributed in four provinces and two territories. One point held my attention that the average numbers of voters per seat is 389,542 but in Punjab it is 430,304. If the same average was kept for the seats allocated to Punjab then it would have got around 155 seats. Last year ECP reduced the share of Punjab from 148 seats to 141 seats. I could not understand the rationale behind this step.

The map given below is self-explanatory. Different colours show the constituency won by a certain party. You can see in a glance the party positions in different areas of Pakistan. Due to certain reasons polling was not held on two seats, both in Punjab. 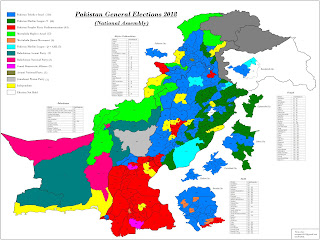 The table given below provides the number of General Seats won by different parties, as well as reserved seats. It is to be noted that besides 272 seats which are contested directly. 60 seats are reserved for women and 10 for minorities. Which are distributed proportionately among the parties. Details of their vote bank are also given.


The table given below give information about the National Assembly seats won by the parties in each province.

In the tables and maps given below I have tried to explain the performance of the three major parties, PTI, PMLN and PPP in the general elections. I have shown their performance upto fourth position. 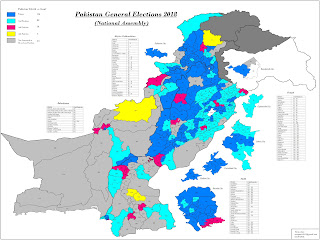 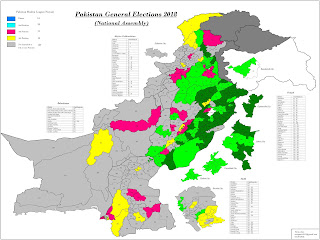 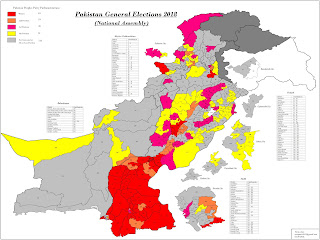 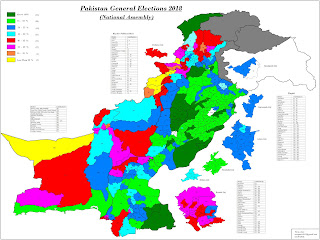 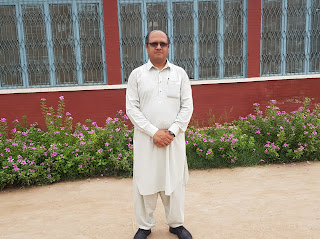 A general view of the polling station.

Creating these maps is a very tedious and time consuming job. Compiling the results also proved to be very difficult as I had to check each and every Form 47 on the website of ECP to write these results in a tabular form. So even after more than a month the maps for provincial assemblies are not ready as yet. Hopefully during the next few weeks I shall be able to spare some time and shall post them too. I request my readers to inform me if they observe any error in the data or the maps.