Miani, a small town in district Sargodha, is a very old town of Punjab. Its history goes back to many centuries and in the past it enjoyed a considerable importance as a commercial centre in this area. Due to proximity to Pind Dadan Khan and Khewra salt mines, it was an important centre for trade in salt.

After the collapse of Mughal authority in Punjab in 1750s the whole province suffered from a political turmoil and deterioration in law and order. Local chiefs became independent of any central authority and competed with each other to carve their own fiefdoms. Two factors further inflamed the situation, first the rising power of the Sikhs in eastern and central Punjab and the second Afghan incursions from the west. Like other areas of Punjab, Miani and surrounding areas also suffered a lot. This is how the situation is described in the Gazetteer of The Shahpur District of 1917:


In the year 1757 a force under Nur-ud-Din Bamizai, deputed by Ahmad Shah to assist his son Timur in repelling Mahrattas, crossing the river Jhelum at Khushab, marched up the left bank of the river. Proceedings of this man may be taken as a type of the excesses committed by the invading armies; and some idea will be formed of the amount of misery caused by these inroads. Nur ud Din, finding that the inhabitants would not pay the large ransoms demanded of them, successively plundered and laid waste with fire and sword three of the largest towns of the district. Two of these, Bhera and Miani, rose again on their ruins, without however completely recovering the shock they had sustained; but of the third, Chak Sahnu, nothing remains but a mound of earth and potsherds.

According to the above mentioned gazetteer Sikhs of Bhangi Misl, took control of this region, after their final success against Ahmad Shah Abdali in 1767. In 1783 Maha Singh sardar of Sukher Chakia Misl took control of the town, from Tara Singh of Bhangi Misl. Later on his son, Ranjit Singh continued his march to expand his state and took possession of Bhera and Jhawrian in 1803, then in control of Jodh Singh. Next important step in this expansion of Ranjit's territories came in 1809, when he conquered two important cities of this region, Khushab and Sahiwal. Next year he conquered Farooka and Kalowal, thus completely conquering the present day Sargodha district. For the next four decades, this area remained a part of the Maharaja Ranjit Singh's states. In 1849 the British after their victory in the Second Anglo-Sikh war annexed Punjab to their Indian Empire.

I had heard about the antiquity of Miani, its wealth in the past and its beautiful havelis. When I heard a few months ago about a particular haveli, having forty rooms and beautiful wooden doors and windows, I decided to visit it. On 29 June, 2017, I reached this town to explore it by myself. Through a mutual friend, Malik Sikandar Khan, we already had informed the owner of the haveli about our visit. The haveli is located at  32°31'49.56"N;  73° 4'30.88"E. 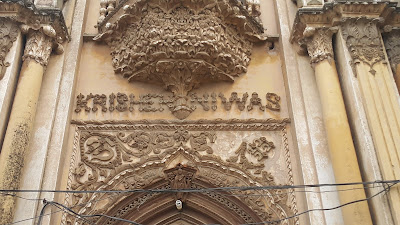 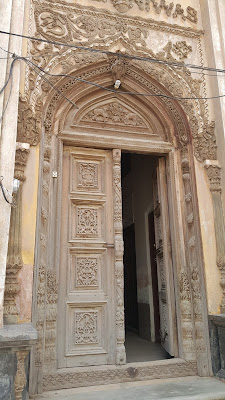 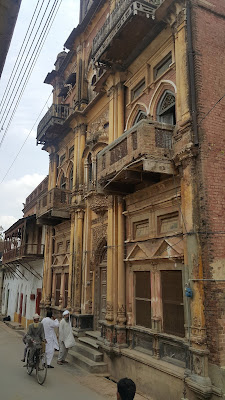 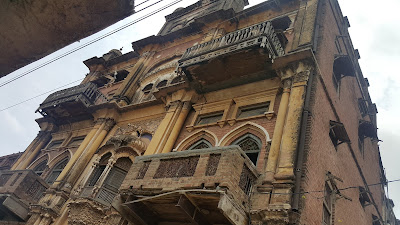 It was a hot and humid summer day. The owner of the house Dilawar Hussain Rana was expecting us and he received us warmly. He took a great interest in our questions and showed his haveli in detail. The ground floor is rectangular in shapes, with verandah in front of rooms on three sides. The walls, arches and pillars are painted in red and yellow. This contrast looks quite attractive. The condition of the ground floor is not quite good. However, repair work is going on. 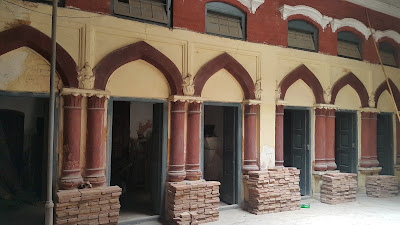 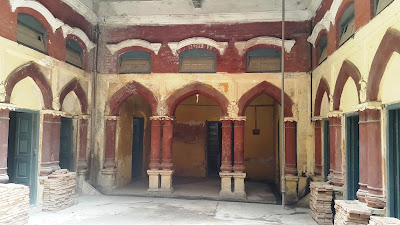 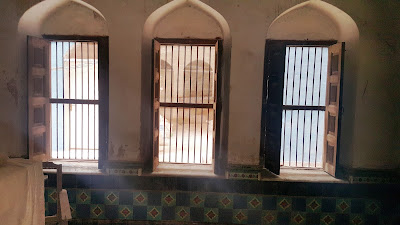 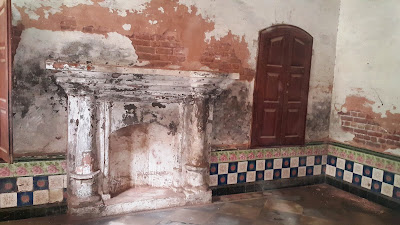 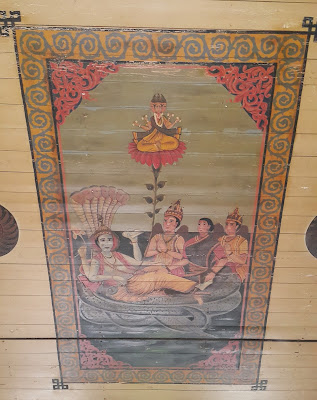 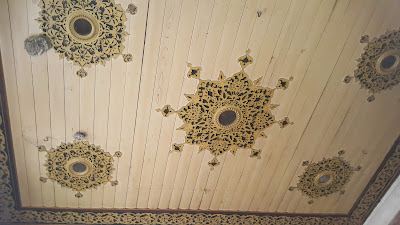 Dilawar Hussain could not inform us about the history of the haveli or his original owners, who migrated after the partition of the country. His own family migrated from Ramba, ten kilometers north of Karnal in Haryana. His grandfather Noor Muhammad was the zaildar of his area. About the haveli he told us that nobody possessed such a big claim to acquire this haveli. So the government auctioned it in 1958 and his father Zakir Ali Rana bought it in the auction for Rs 40,000/-. They had to spend a further Rs 10,000/- to get it vacated by the squatters. Zakir sahib was principal of the government college Bhagtanwala. 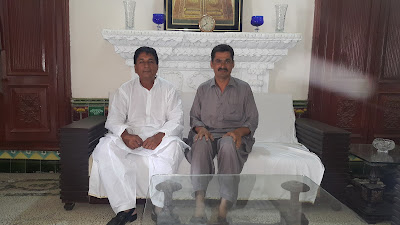 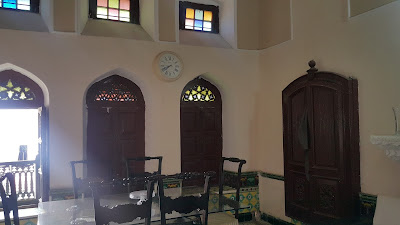 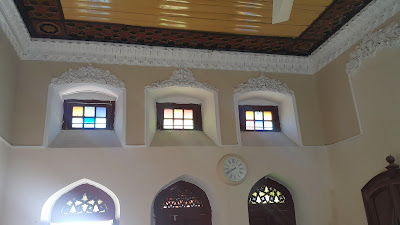 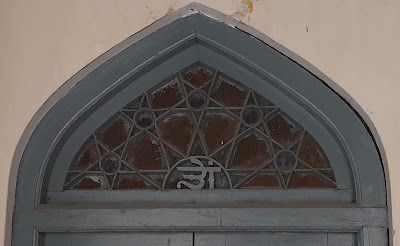 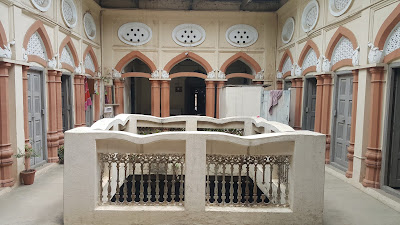 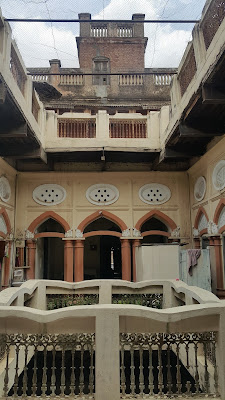 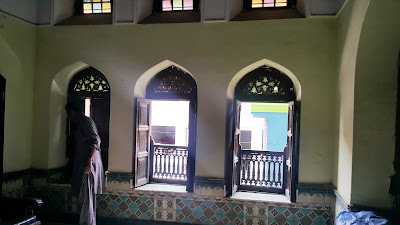 As we have seen above the condition of the first floor is very good. Everything, including doors, windows, ventilators and cupboards are in their original condition. After serving us tea and having a little chat, Dilawar sahib took us to the roof of the house. The roof has two beautiful structures, opposite to each other, having two rooms each. This haveli is still the highest building in Miani. I wonder what would be its magnificence, when it was constructed. 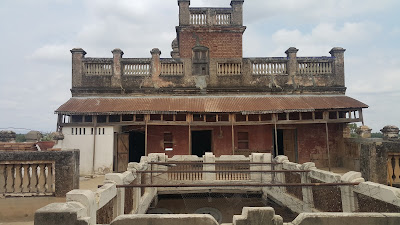 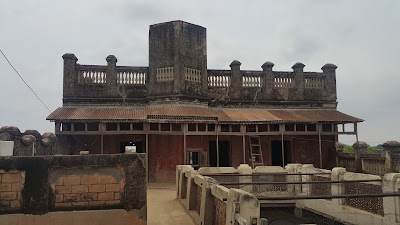 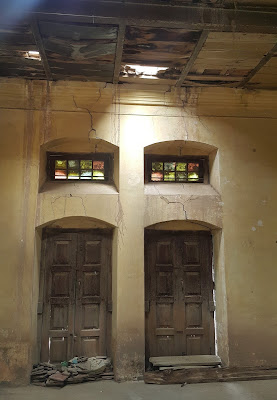 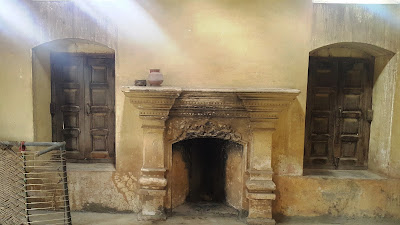 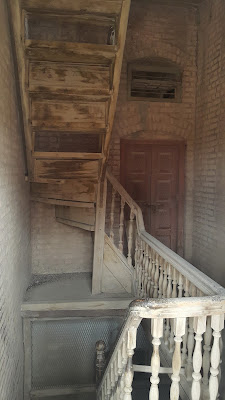 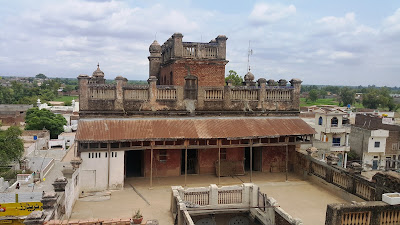 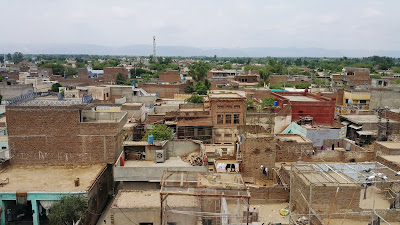 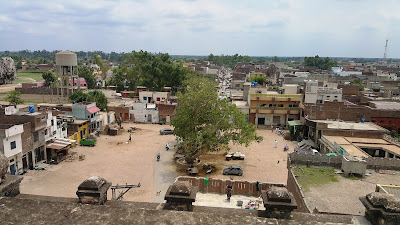 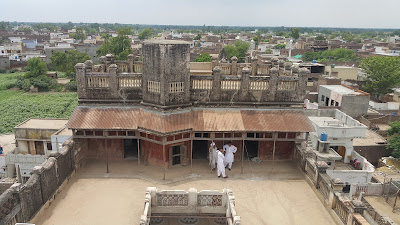 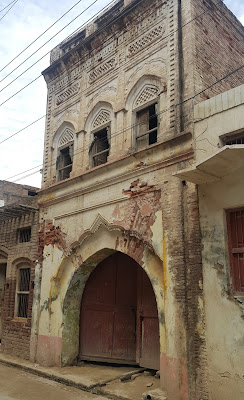 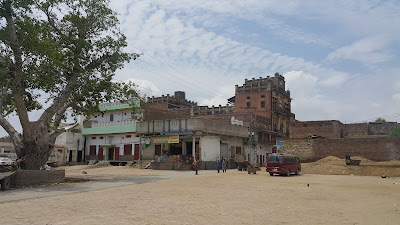 During my visit I could not find much about the history of the haveli or its original owner. However, I found the following information in Wikipedia:

Pre-partition, there were also many Hindu Brahmin families living in Miani. There were Gosain Brahmins of six clans, some of which are Balak-nathiye, Dabre, Bhature. The details are available with Purohits at Haridwar, India, a most holy place for Hindus on the banks of holy river Ganges. They were living, before partition, in and around Jhikki Gali of Miani, which was near a 'Roni Khui' or a well. These Gosain families would marry their children into Bagge, Kapooriye Saraswat Brahmins of the region. Other Brahmin families of Miani were Mohyal Brahmins, mainly Dutt. A very large house belonging to a Dutt family still stands tall in Miani with the name 'Krishen Niwas' inscribed in Hindi on the elaborately carved, large wooden doors (for which Miani & Bhera were famous). This door has also engravings of Lord Krishna, lotus etc.

The visit to by all means was pleasant. We met Dilawar Hussain Rana a man of knowledge and experience. He is an advocate by profession. He was very conscious of this haveli's historic, cultural and architectural value. He recently convinced his brothers to cooperate in its renovation. Not an easy task. He was expecting the renovation to cost them more than 2 million rupees. Unlike many other such havelis and buildings, this is a success story. Dilwar sahib invited me to visit the haveli again after the completion of the renovation. Now I am eagerly awaiting my next visit to this haveli.