Sultan Shahabuddin Mohammad Ghauri is a well know historical figure. Though Mohammad Bin Qasim and three centuries later, Sultan Mahmood Ghaznavi had opened the gates of India to Muslims conquest, but they could not move permanently beyond present day Pakistan. The task of conquering the norther India finally fell upon Mohammad Ghauri.

He was born in 1149 AD, in the Ghor region of Afghanistan, almost in the middle of Ghazni and Hera, an area of rugged mountains. His brother was a ruler of his region and soon they expanded their state at the expense of now declining Ghaznavi Empire. He first invaded Indiain 1175 and captured the city of Multan and in 1178 tried to invade Gujrat but faced a crushing defeat. However, in 1181 AD, he captured the important city of Lahore, the last stronghold of Ghaznavids. Now the path to northern India was open.

In the year 1191 AD, he invaded India. Prithvi Raj Chauhan the ruler of Ajmer and Delhi met him at Tarain (modern name Taraori) a small town located at 29° 48' 08" N, 76° 55' 53" E in Haryana. As is known, he was defeated, but recovered remarkably and came again just a year later in 1192 AD, to cross his sword with Prithvi Raj. This time he inflicted a crushing defeat upon Prithvi and captured the city of Delhi and appointed Qutub ud Dina Aibak, as the governor. Hence, laid the foundation of Delhi Sultanate. With in a few years his general captured areas up to Bengal.

A few years later while travelling back from India to Ghazni he was assassinated by unknown assailants. Historians dispute about the identity of his assassins, Ghakhars, Khokhar and even Ismailis, all are suspected. This assassination took place at Damiak, a small village located in tehsil Sohawa of district Jhelum at 33° 11' 40.60" N, 73° 29' 28.10" E.

A few years ago, Doctor Abdul Qadir Khan took personal interest and built a very beautiful tomb on his grave in 1994-95. It is a very beautiful and grand tomb, befitting a king like Ghauri. Its beautiful white building is located in open green fields of Potohar and is a great spectacle 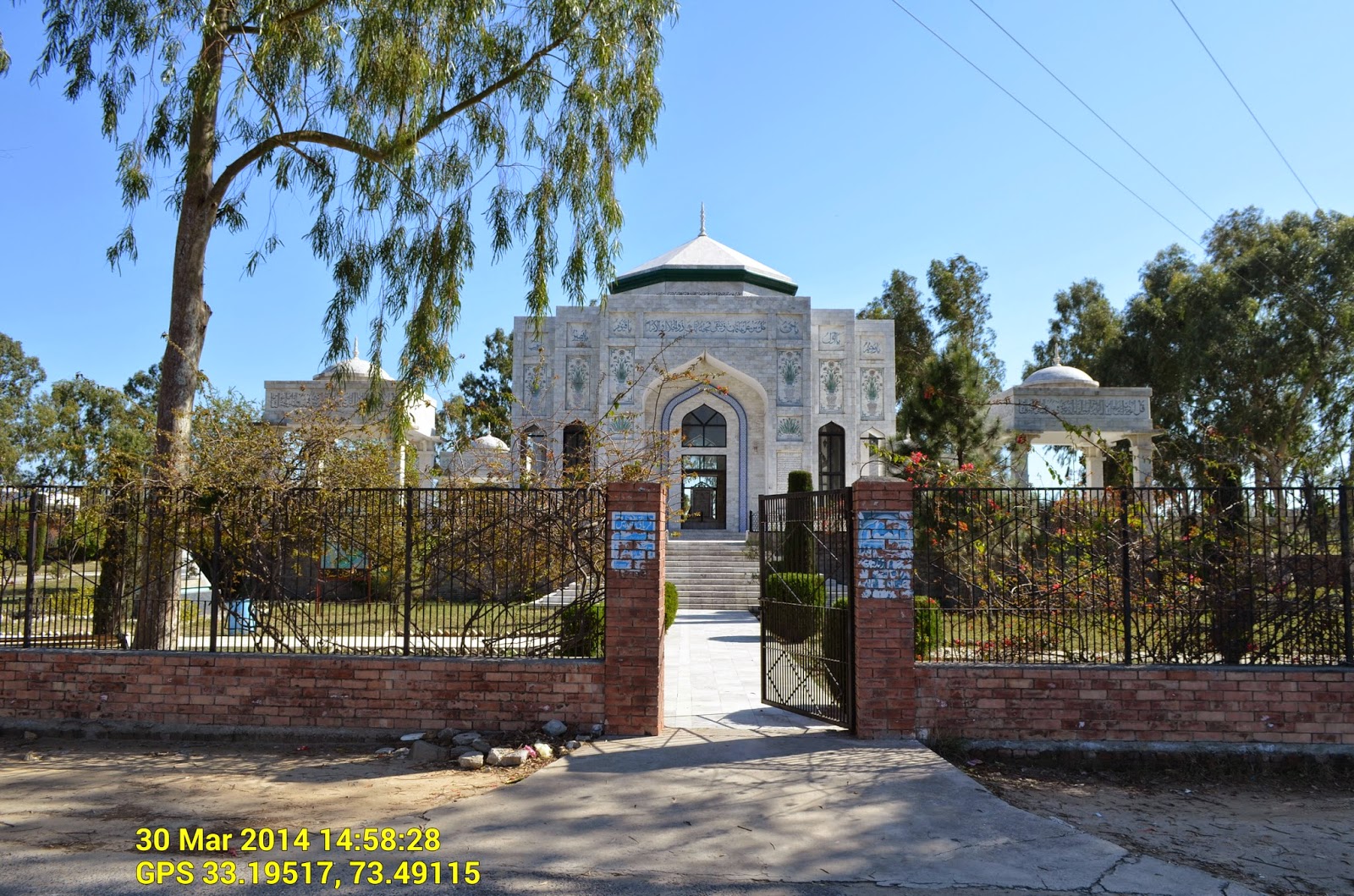 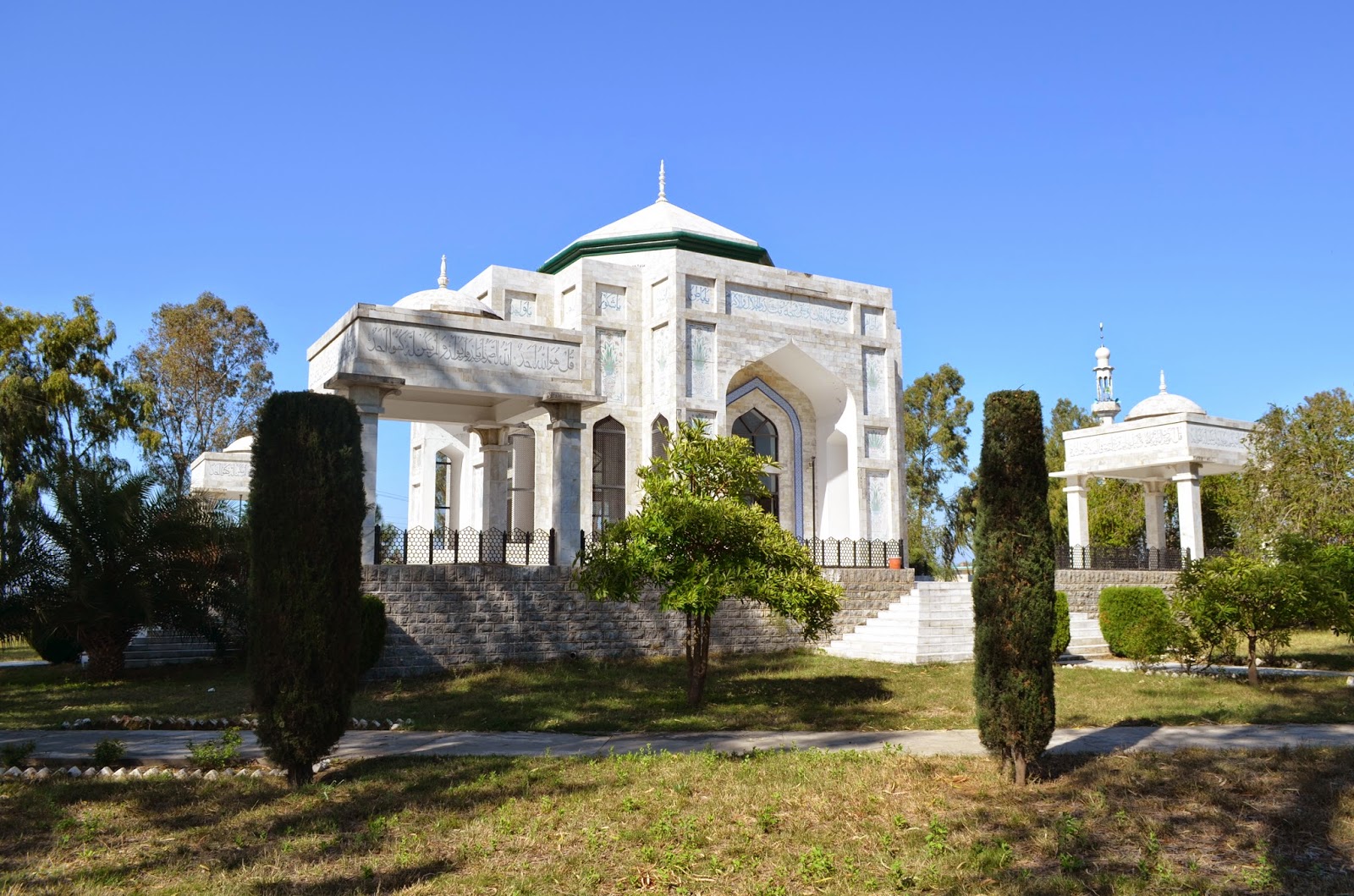 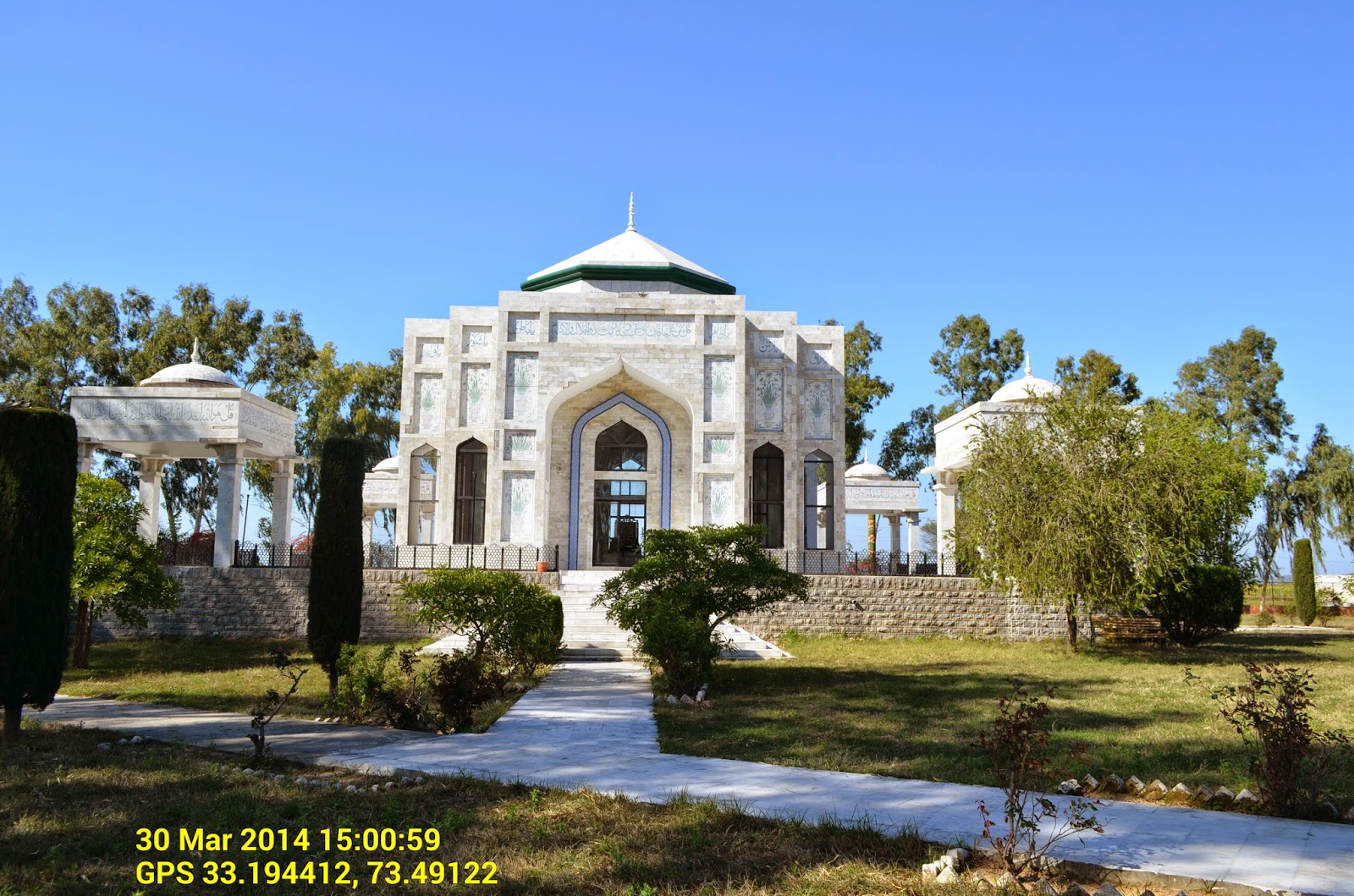 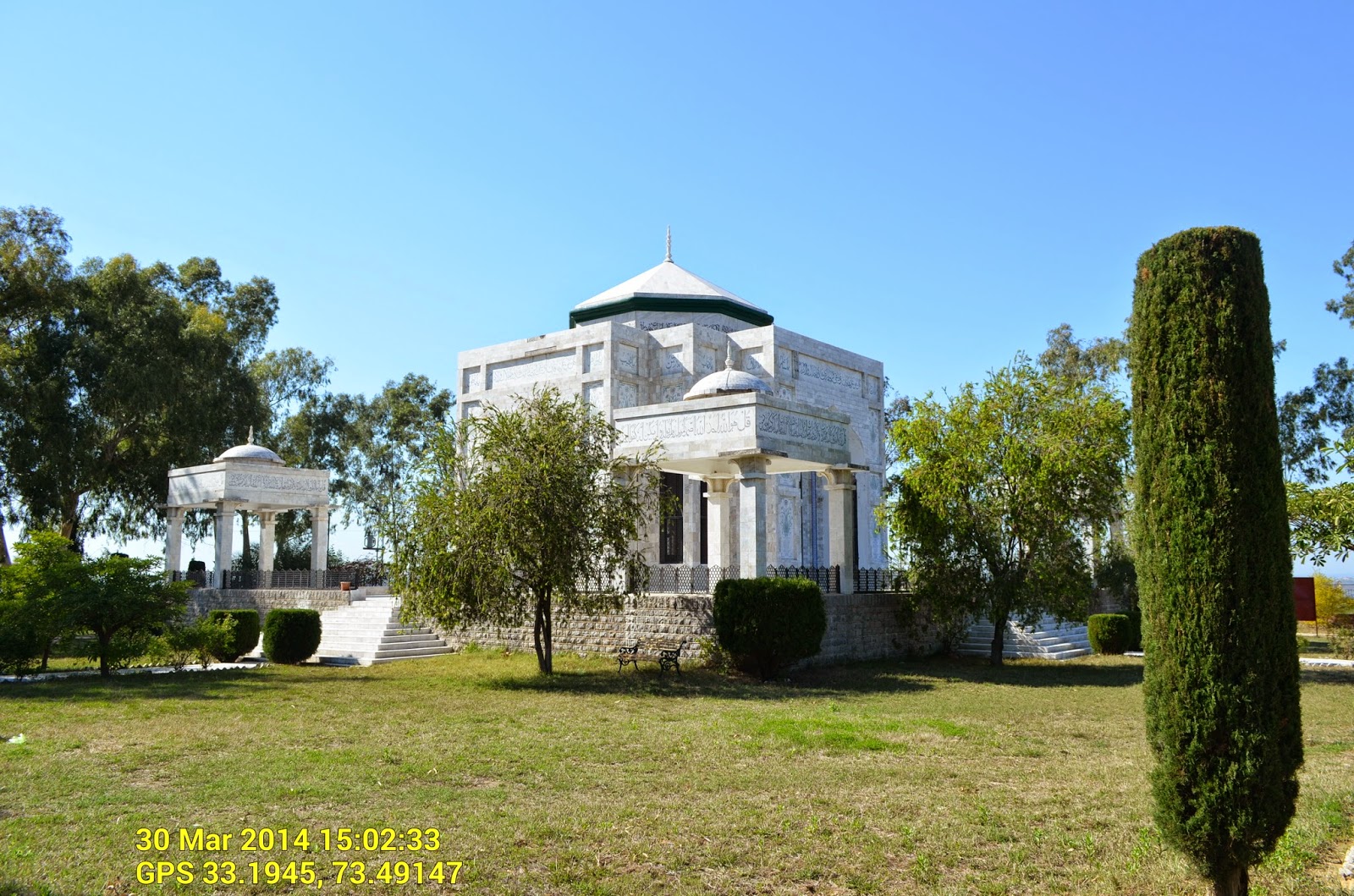 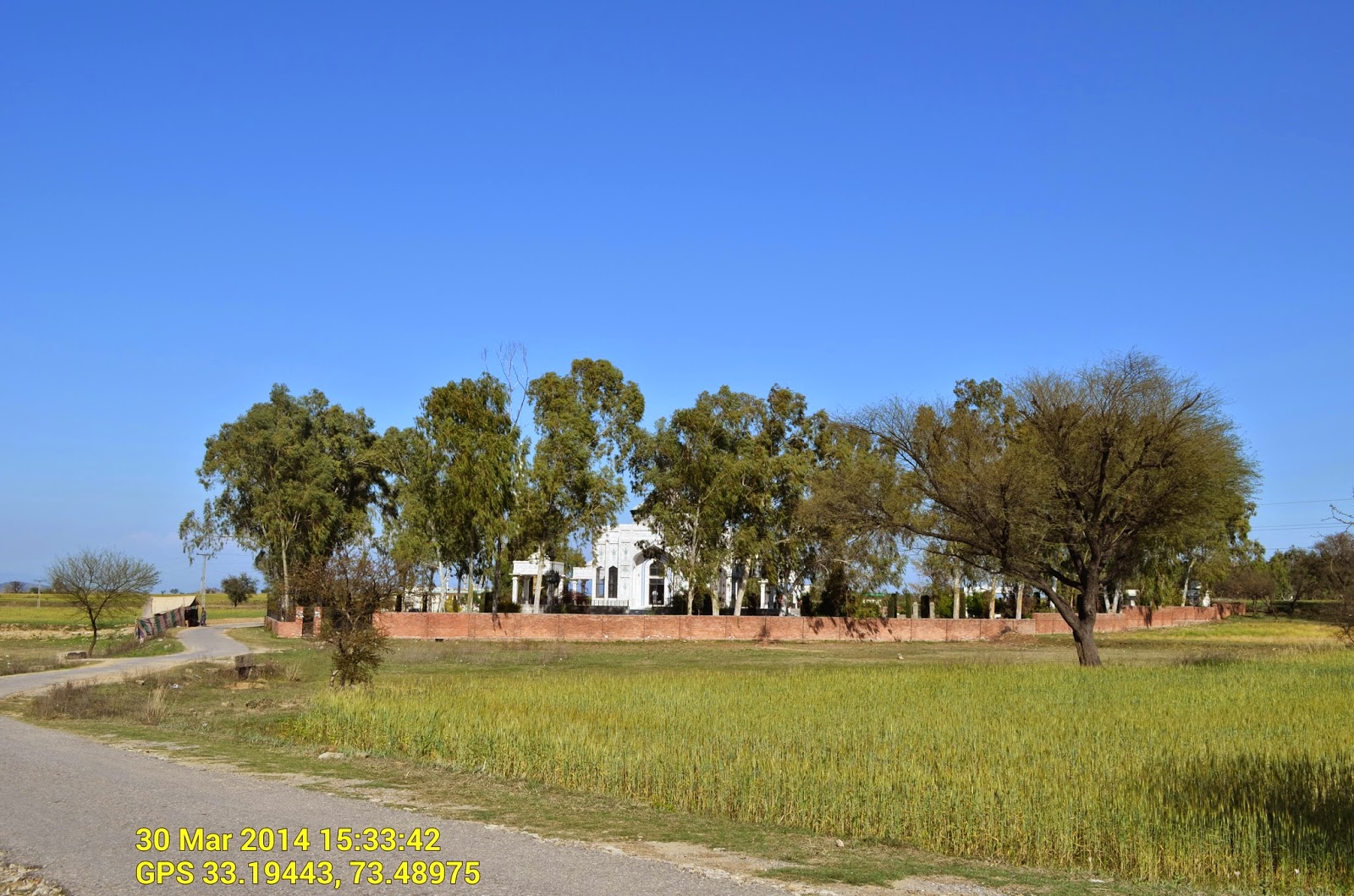 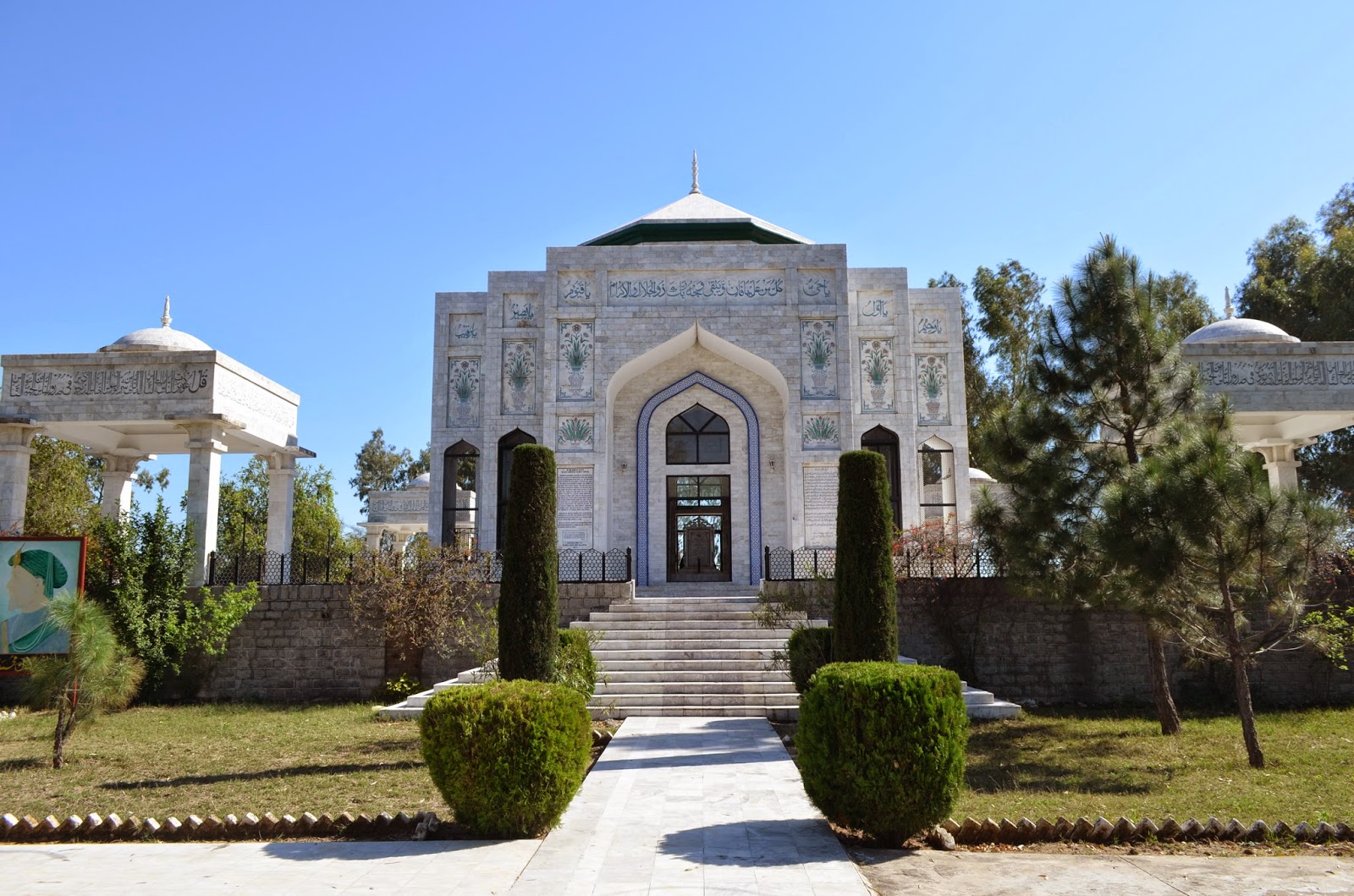 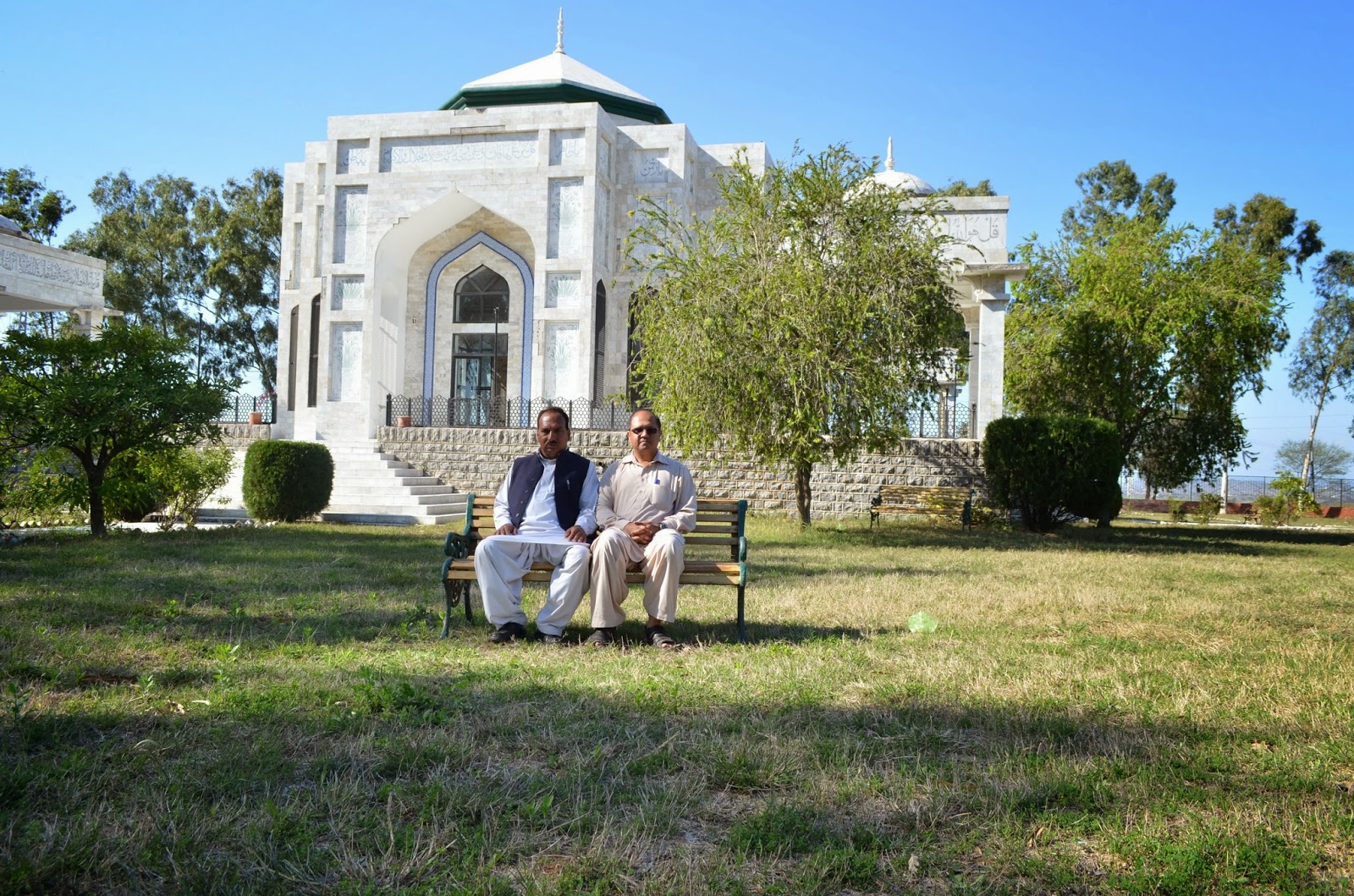 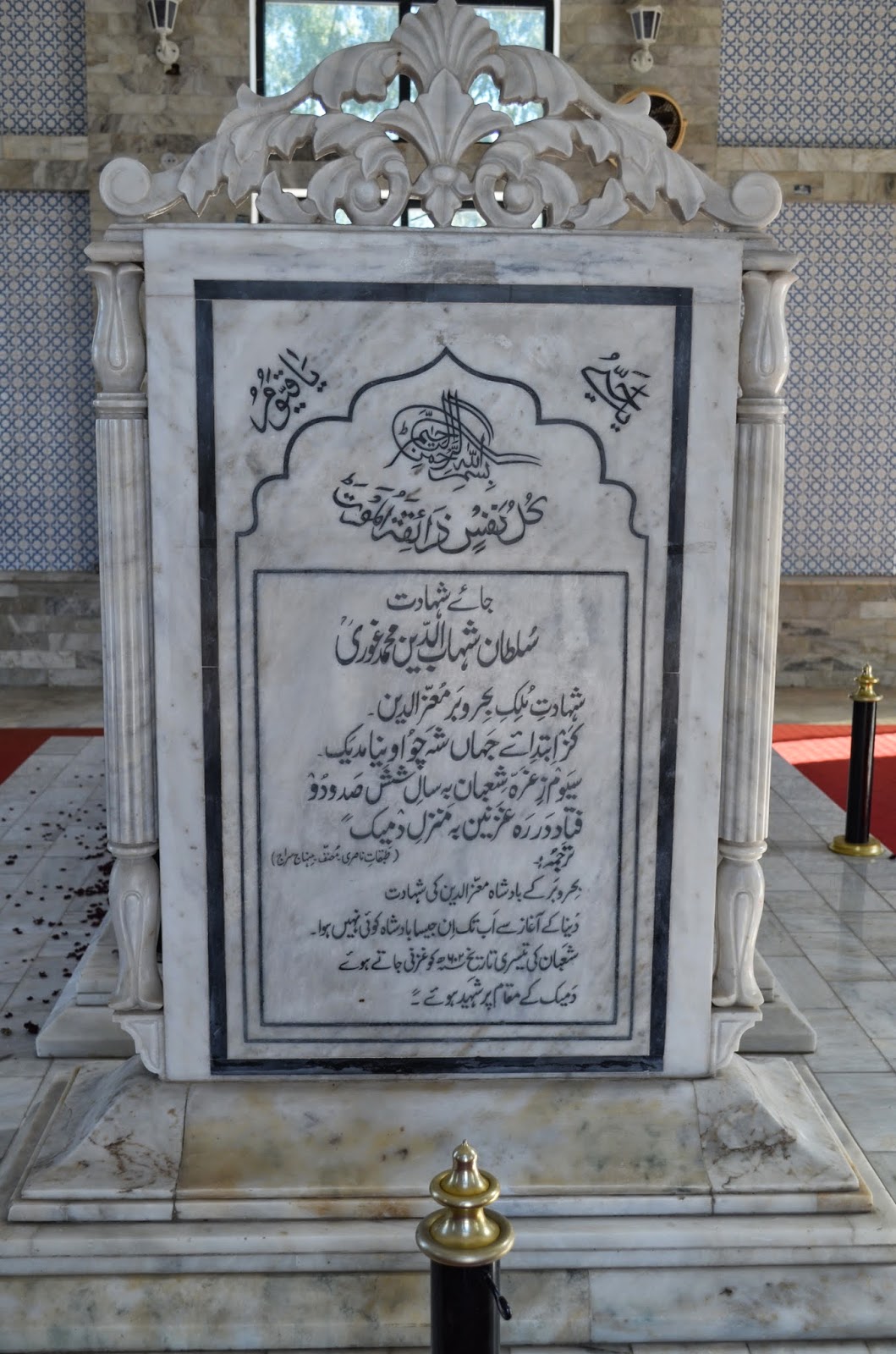 Tomb stone of the grave. (30.03.2014.)
It reads: "Martyrdom of the king of land and sea, since the inception of the world there have been no king like him. He got martyred on 3rd of Sha'ban 602 AH, at Damiak on his way to Ghazni." Persian lines by Minhaj Siraj. I translated the Urdu translation given below the Persian. 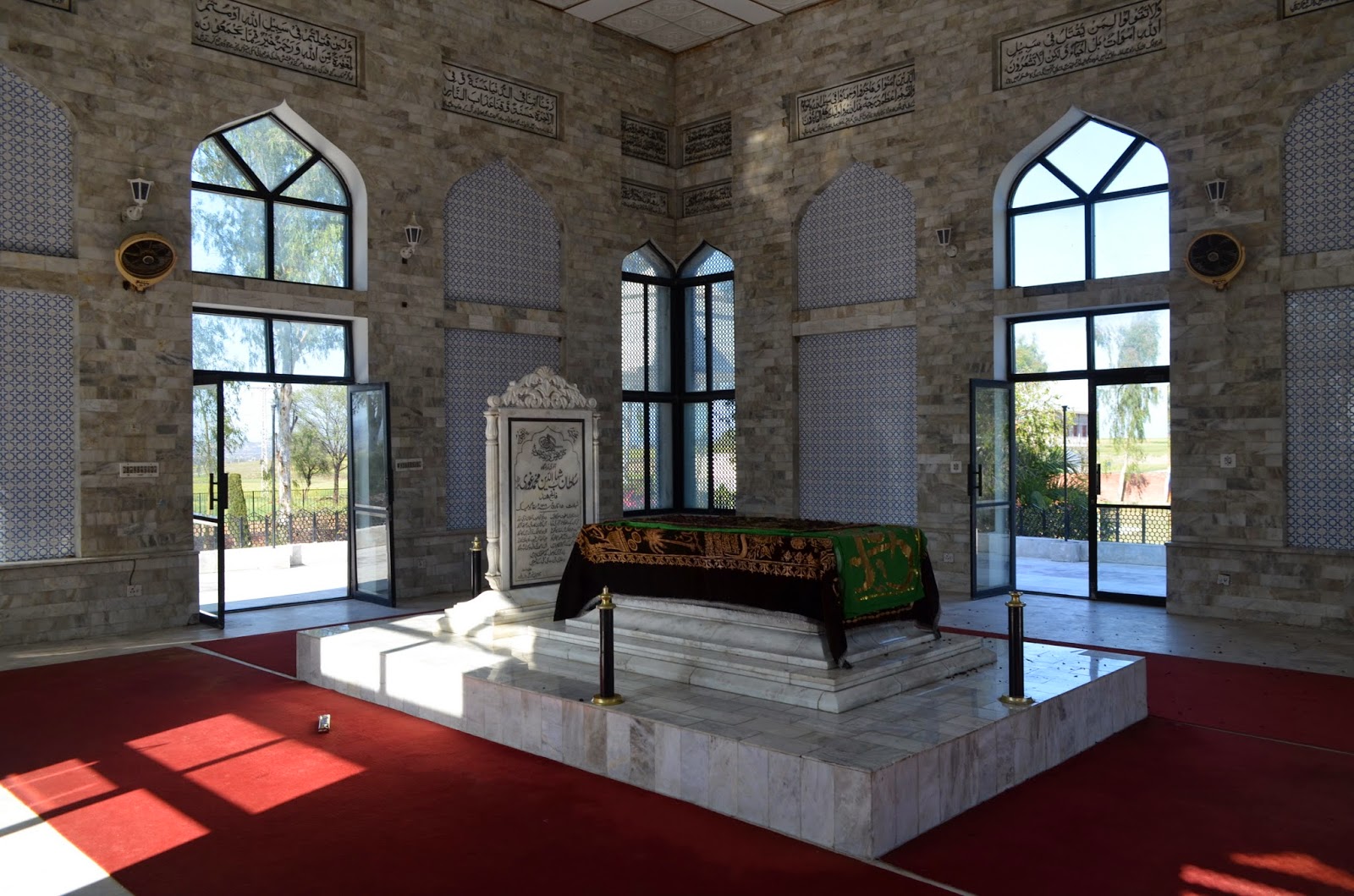 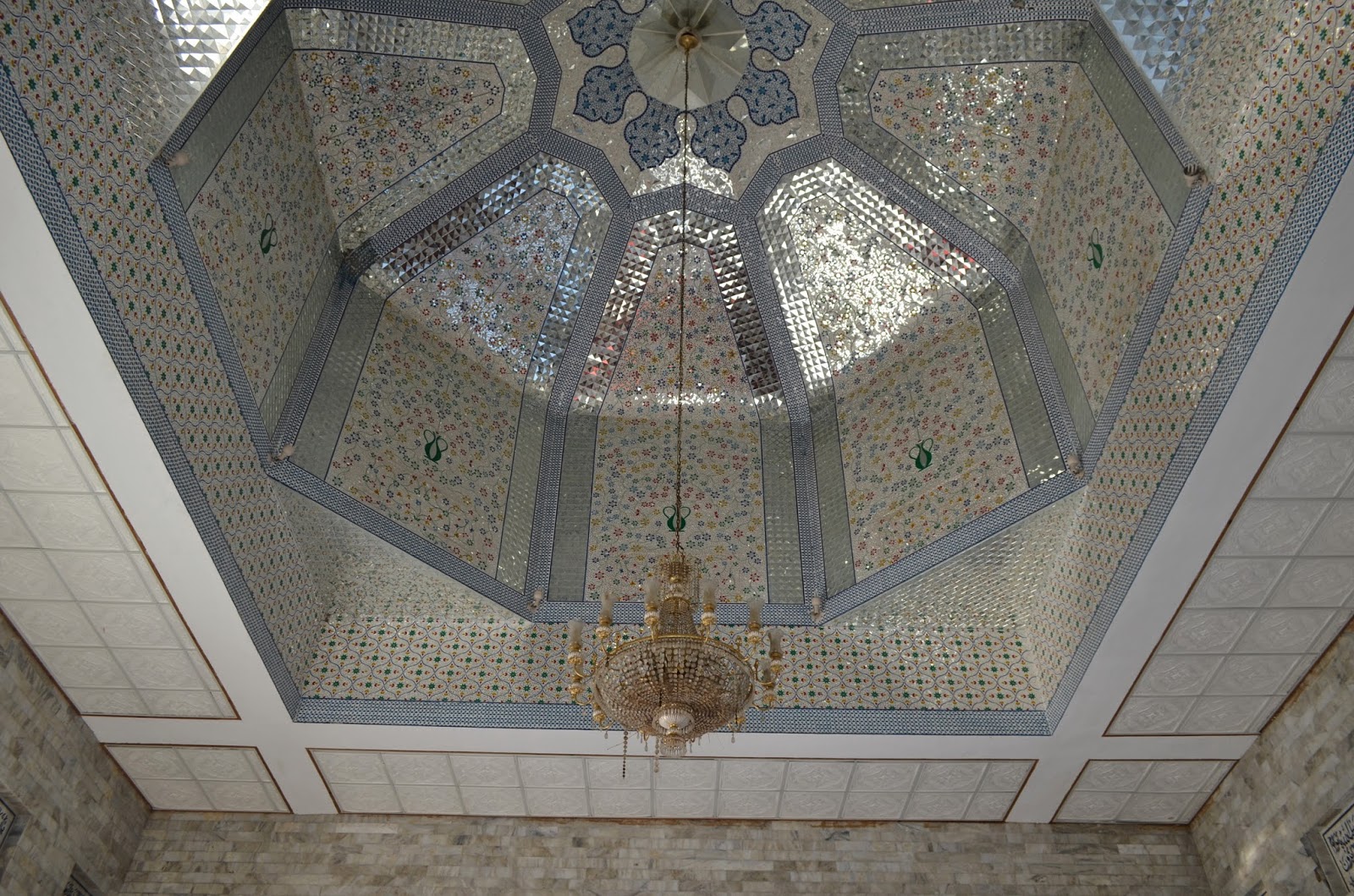 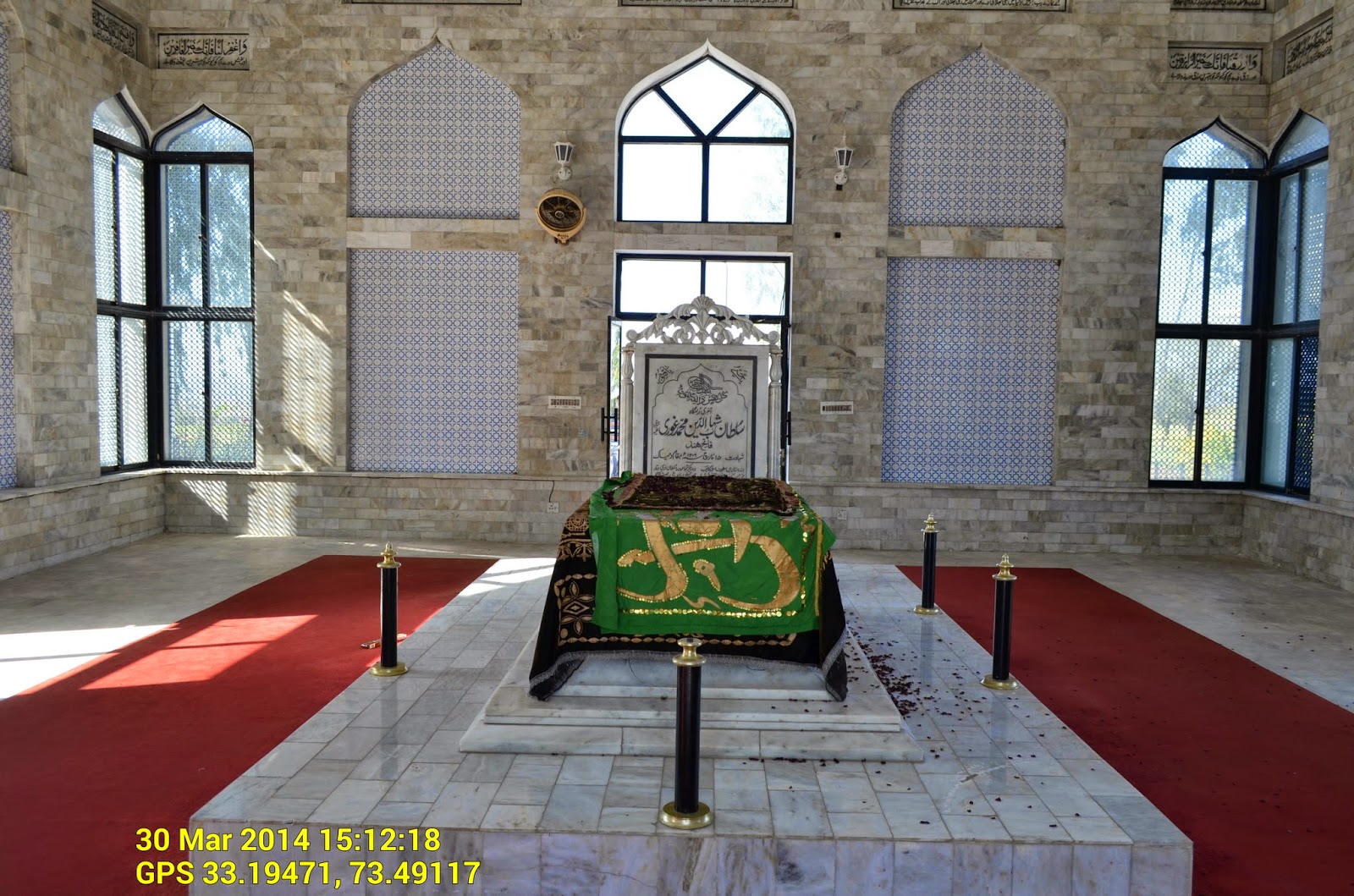 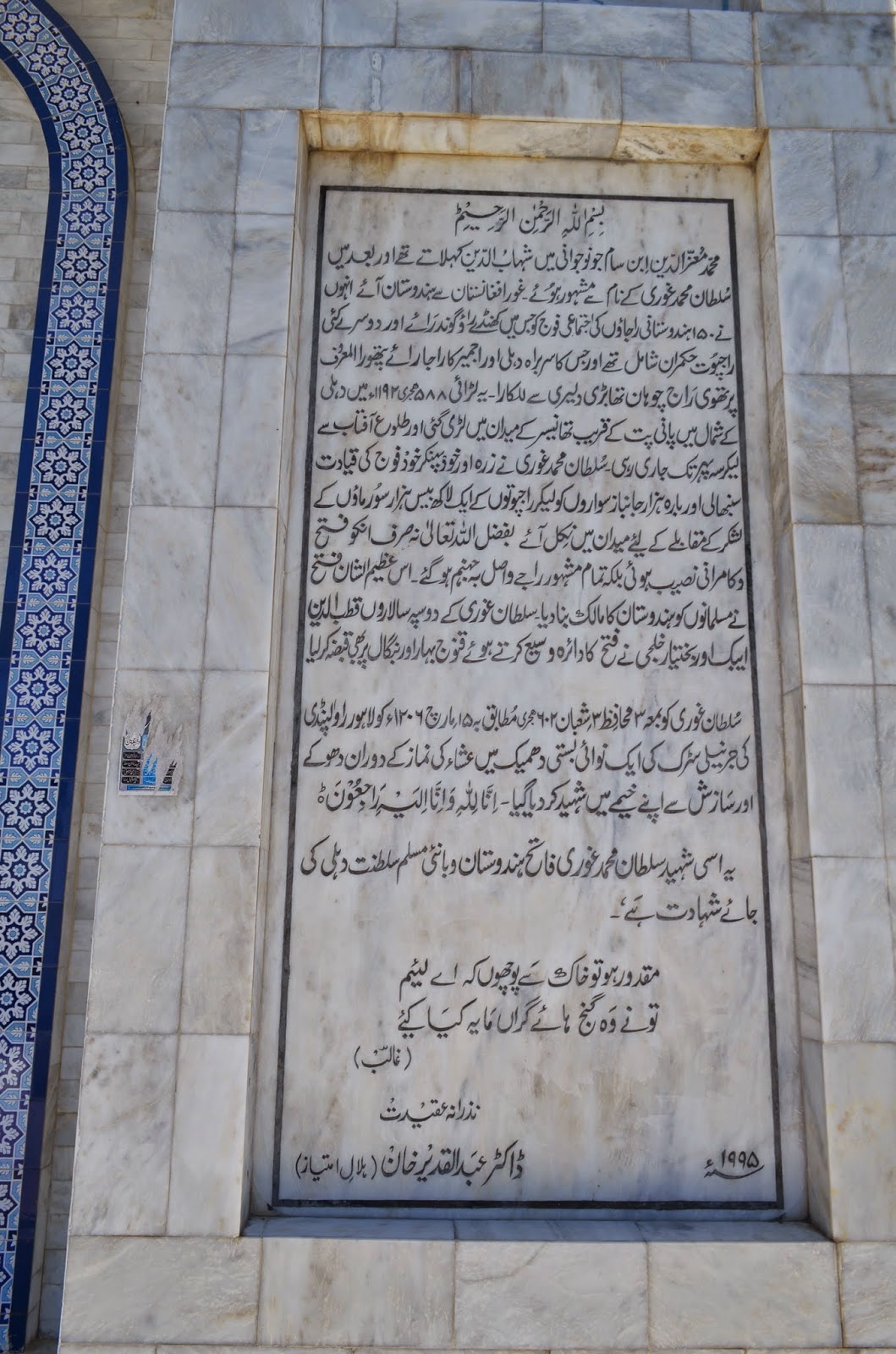 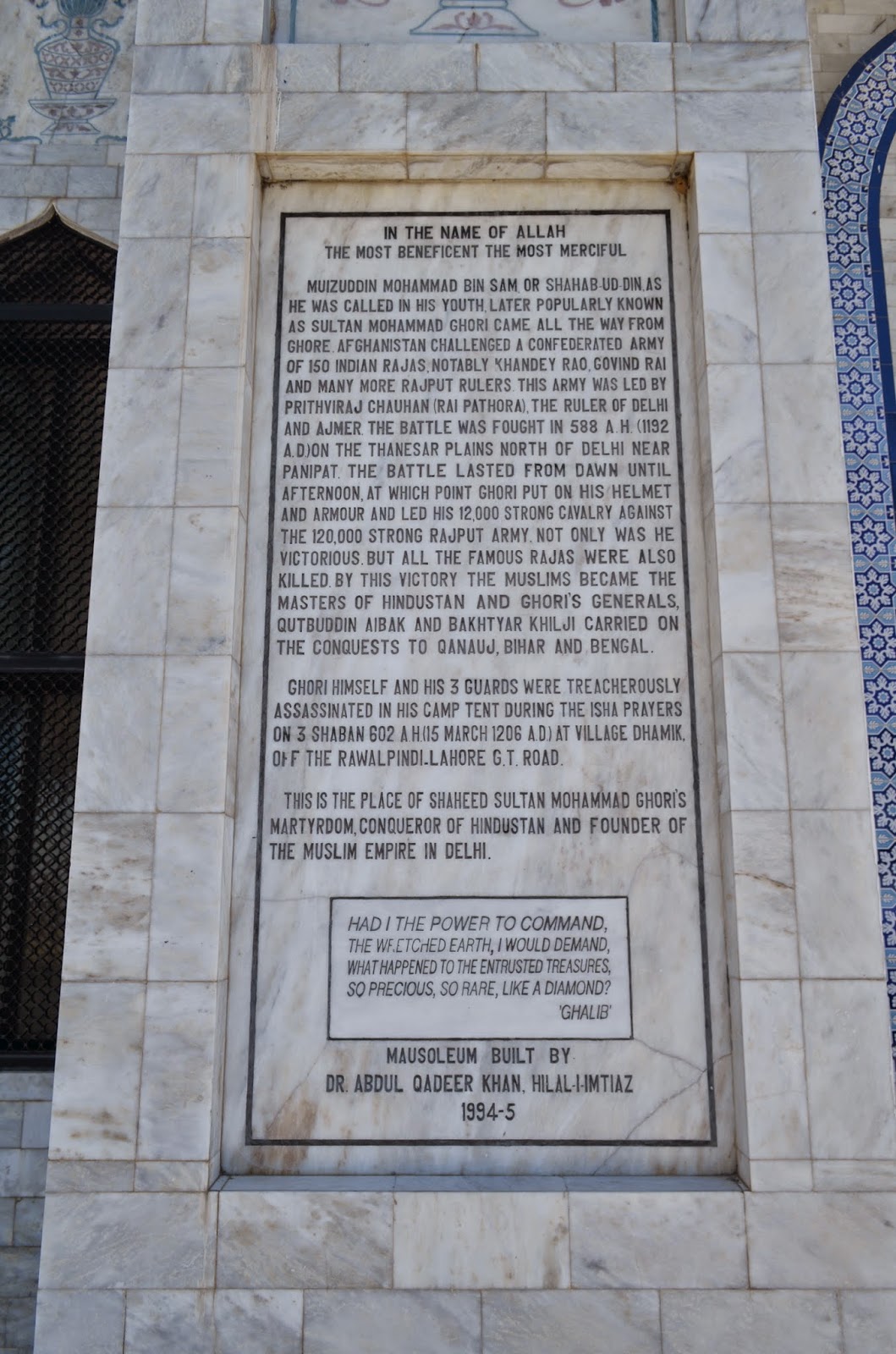 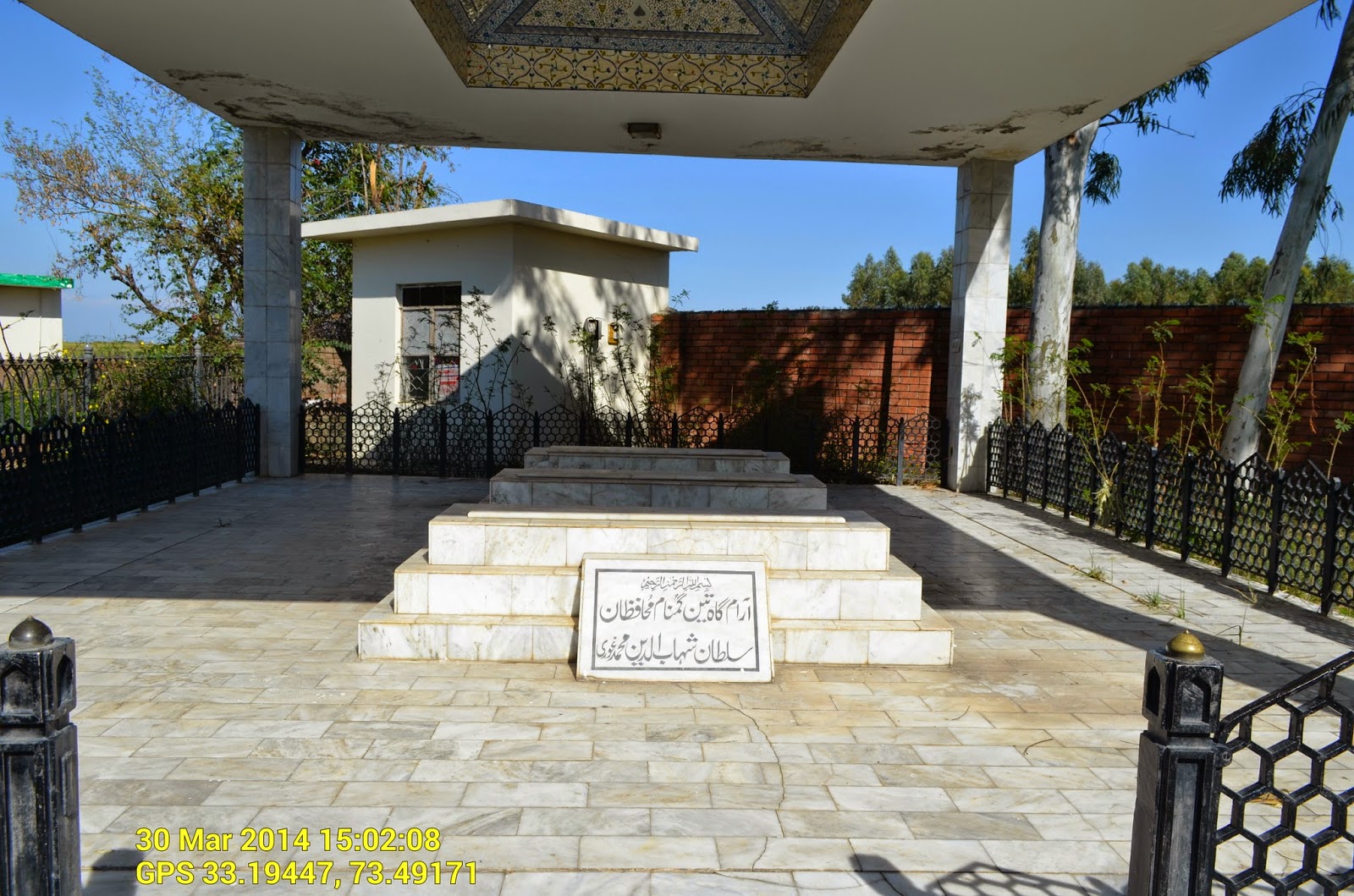 One surprising discovery that a visitor makes, while visiting this mausoleum is the grave of Major General Mawabzada Muhammad Sher Ali Khan Ptaudi. Which exists in the compound of this mausoleum. He was the second son of Nawab Ibrahim Ali Khan Pataudi. He was born at Pataudi, Haryana, located at 28° 19' 11.10" N, 76° 46' 57.80" E, on 13 May, 1913, and died on 29 May, 2002, in Lahore. He was the brother of the grandfather of Saif Ali Khan, the famous Bollywood actor. I don't know why he was buried here. May be he liked the beautiful and historical place and the peaceful surroundings. 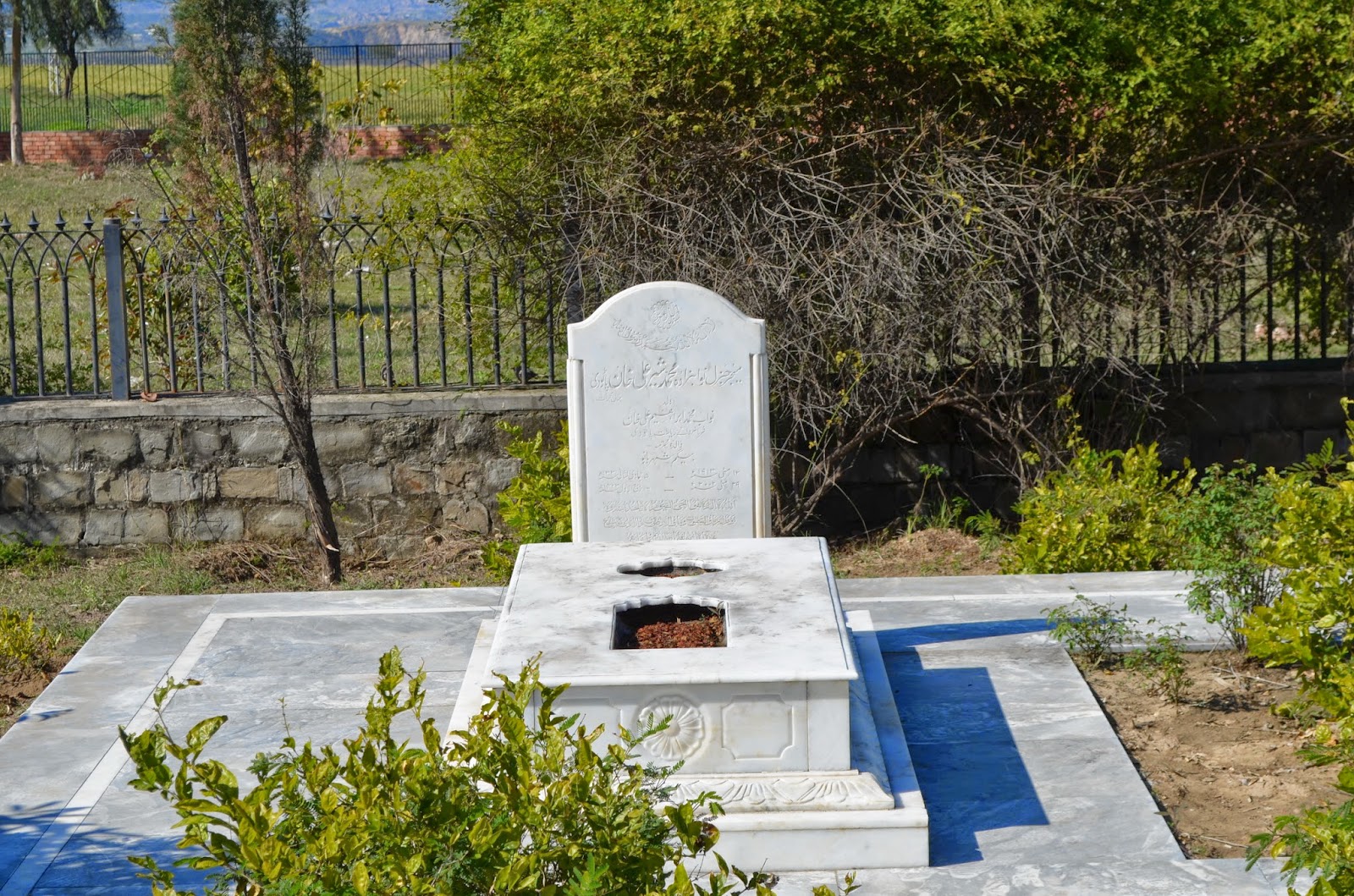 Below is the Ayat Al Kursi, a verse from the Holy Quran. 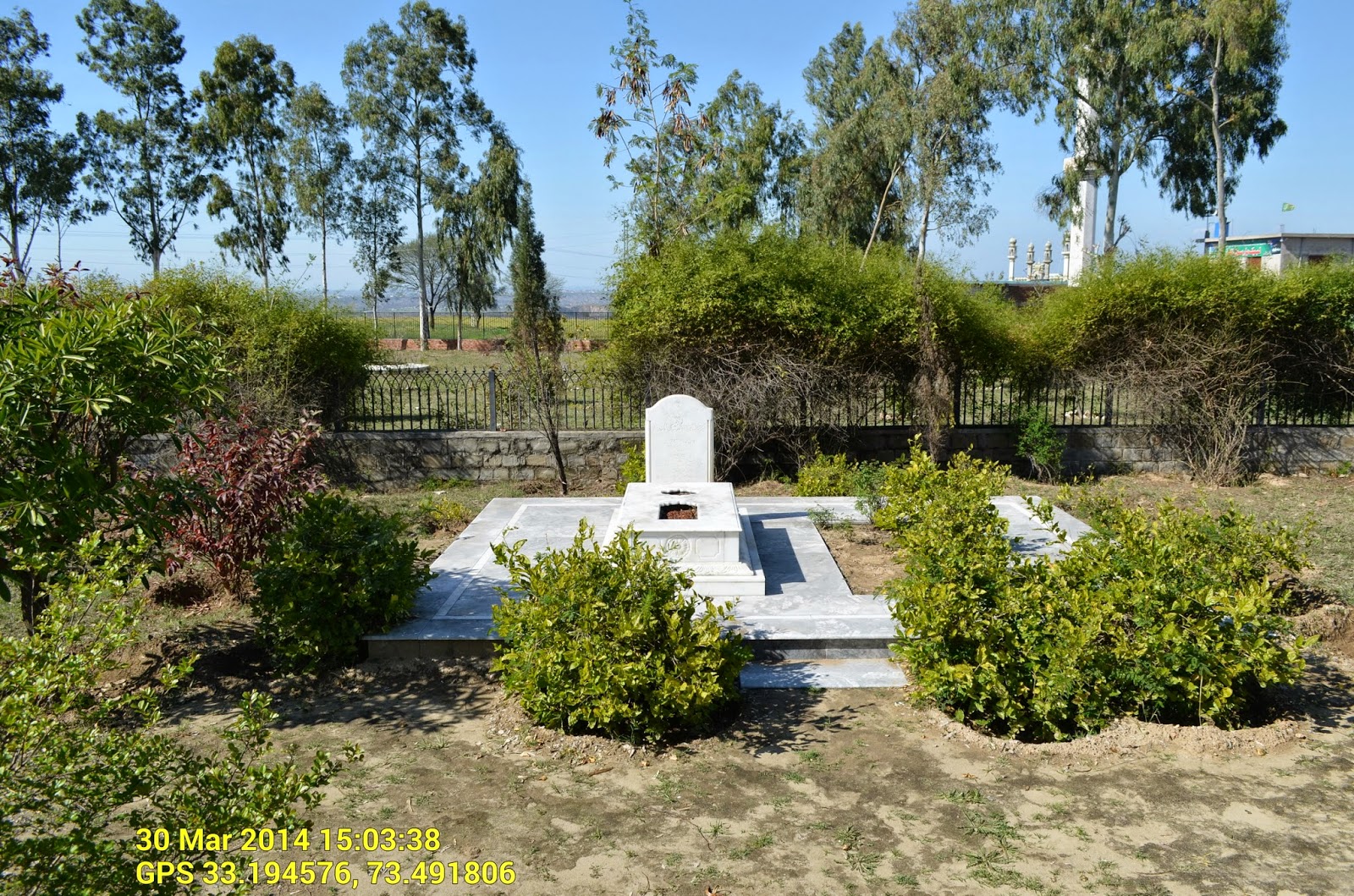 It is easy to reach Damiak. Tavel on GT road, from the zero point of Islamabad the town of Sohawa is just 73 Kilometers. Just before entering the town turn left, and travel further for 13 kilometers. Take help from the google maps or ask for directions.

I shall appreciate your comments on this post. Your suggestions or any other information is also welcome.


View Tomb Of Sultan Muhmmad Ghauri in a larger map
Posted by Tariq Amir at 00:28