Bhera is one of the oldest cities in Pakistan. Its history goes back to thousands of years. At the time of the attacks of Sultan Mehmood Ghaznavi,  Bhera was a big and important cities and a stronghold of Hindu Shahis. Sultan attacked Bhera in 1004 AD.

Foundations of the modern city were laid by Sher Shah Suri  (1540 - 1545 AD). His army almost destroyed the old city of Bhera (exact circumstances are not known to me) and he decided to construct a new city nearby at the present location. He constructed a splendid mosque in the city which still exists with all its glory. During the Mughal period it was an important city and a royal mint existed here to mint coins.

On the decline of the Mughal power it came under the attack of Ahmad Shah Abdali in 1757 and consequently suffered a lot. Sikhs captured this important town in 1771 AD. During the Sikh rule the land mark mosque of Sher Shah Sur was badly damaged and the Sikhs used it as a stable and a store. It was restored to Muslims in 1850s after the British took control, and Muslim caretakers also started the repair and restoration work. Which continued for a long time in several stages.  The mosque is located at 32° 28' 40" E, 72° 54' 36" N. 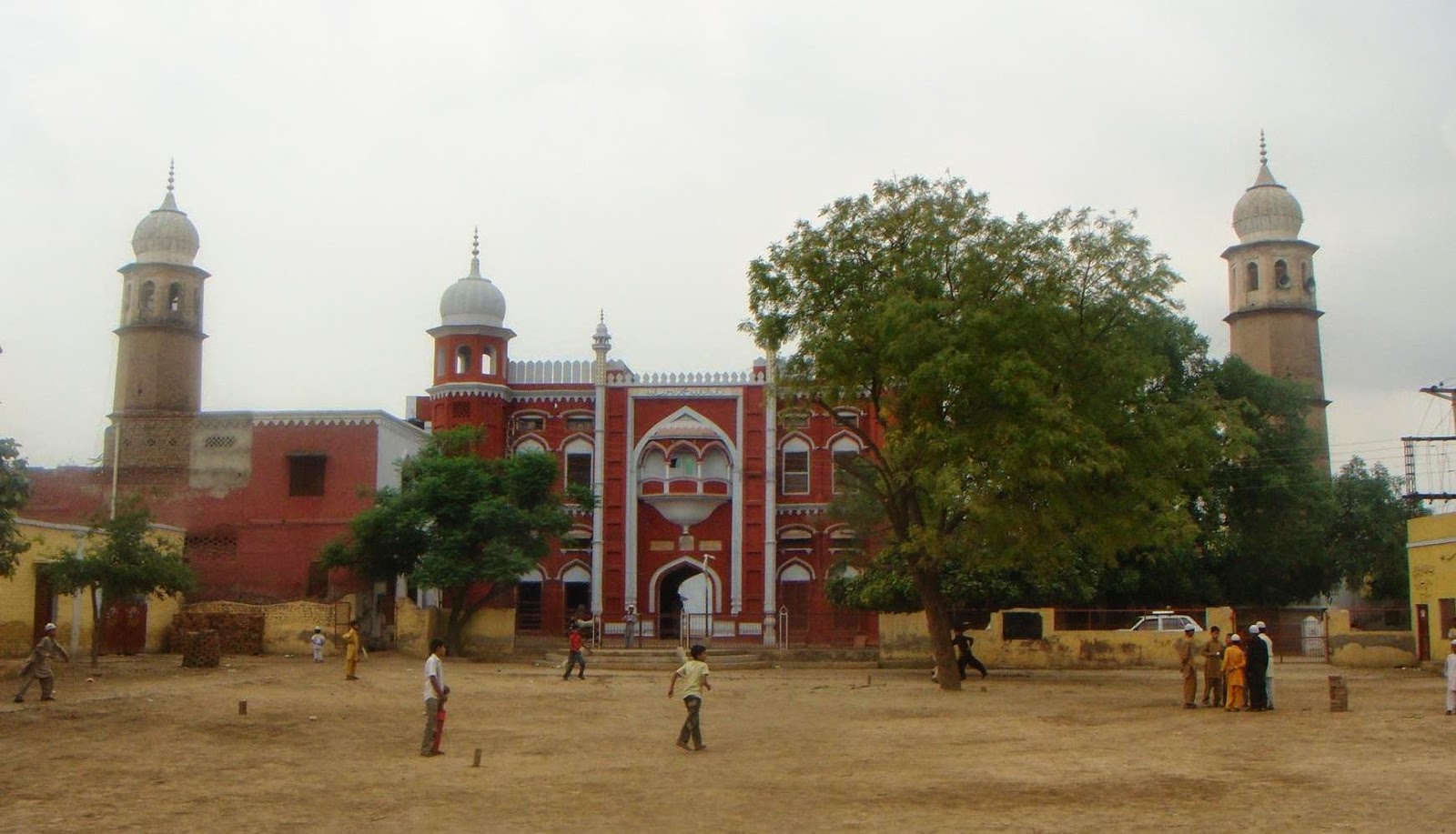 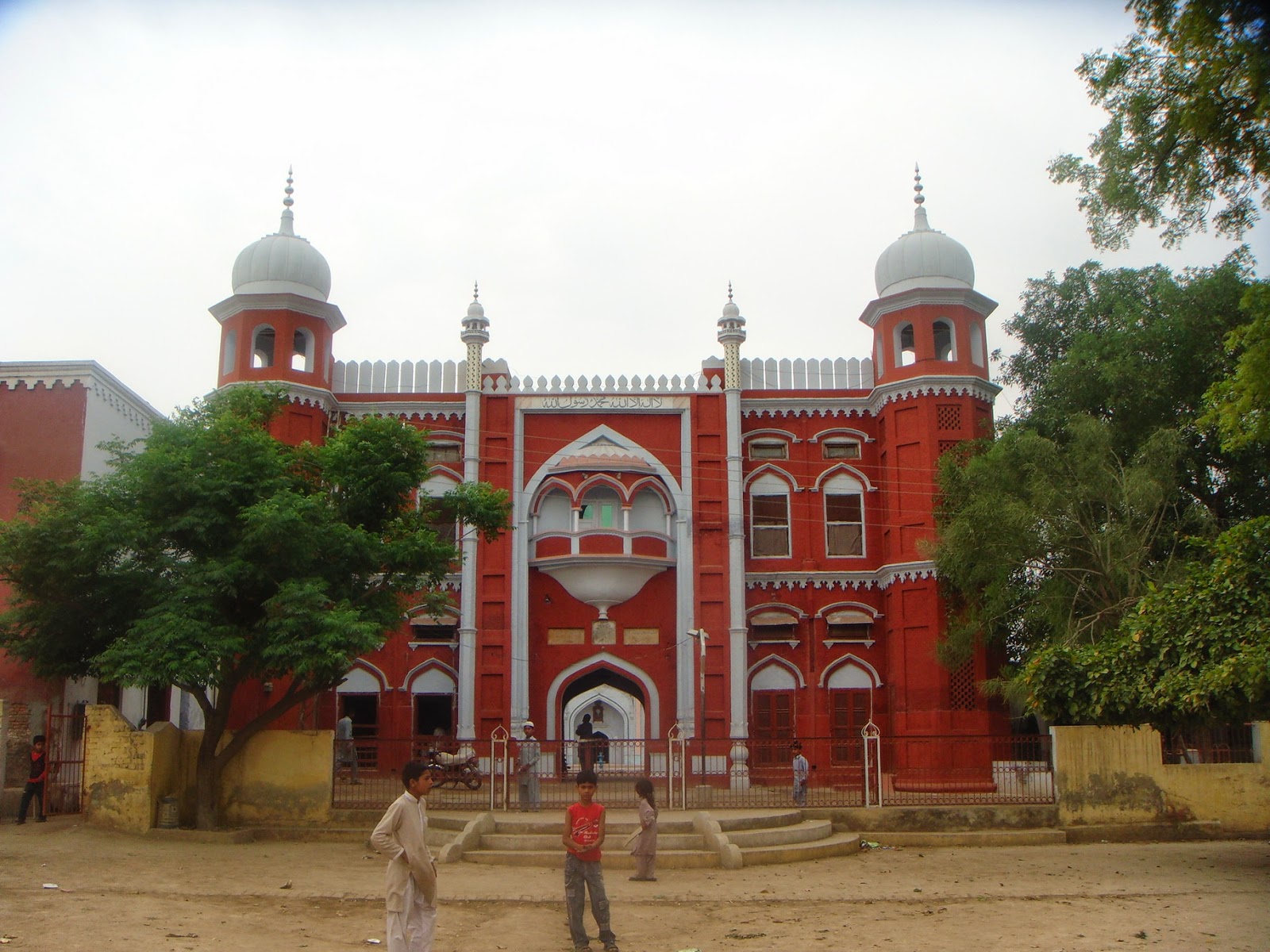 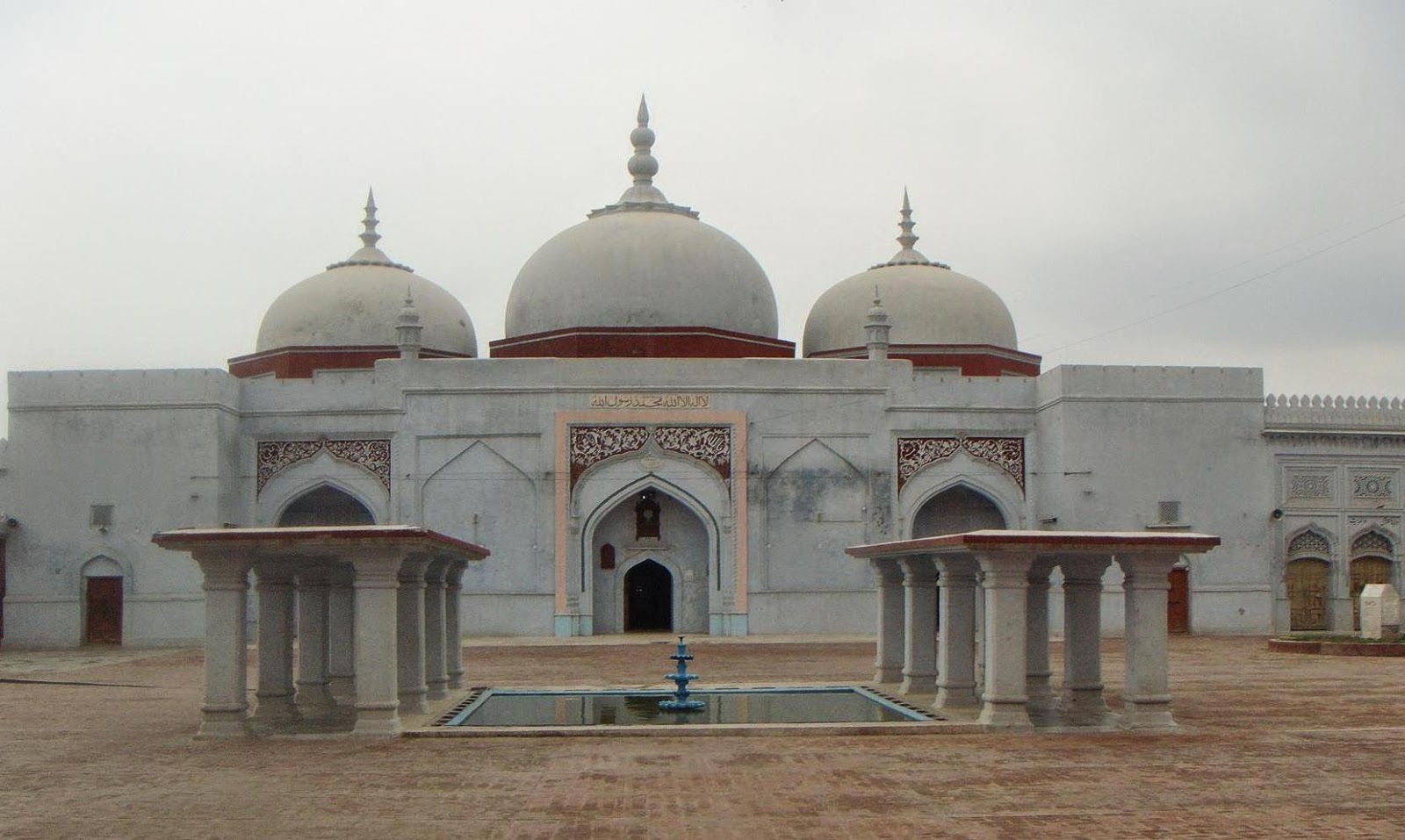 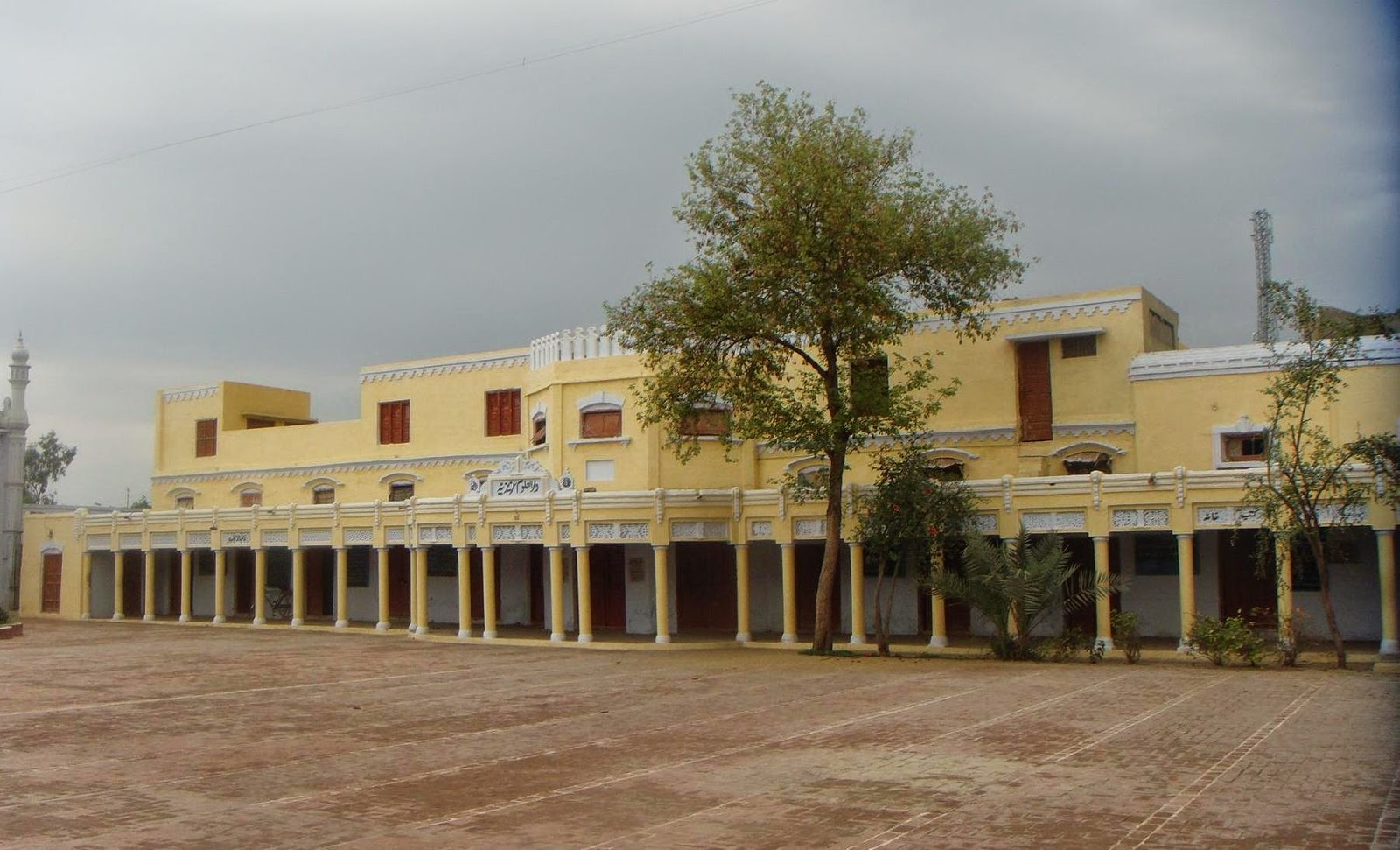 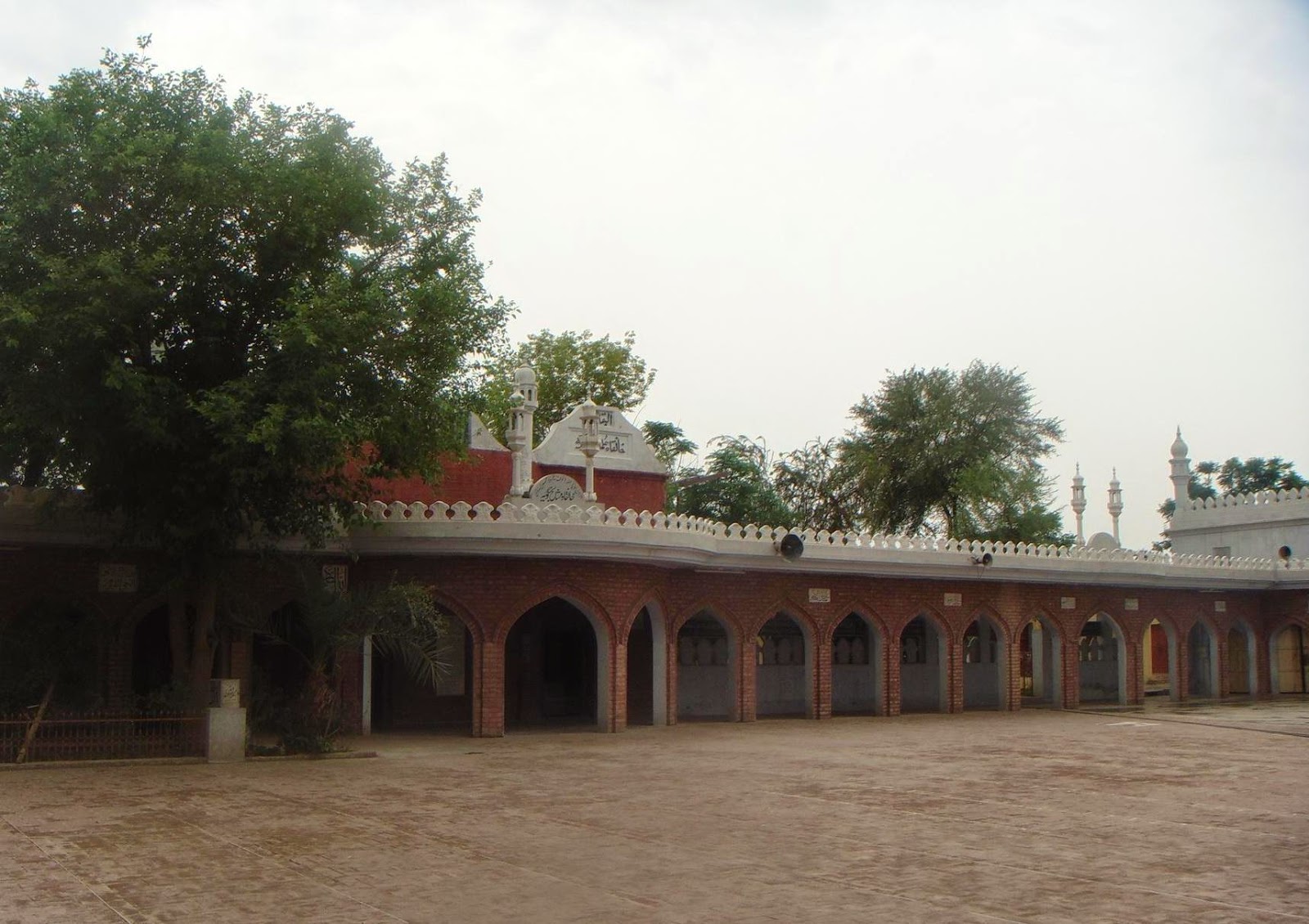 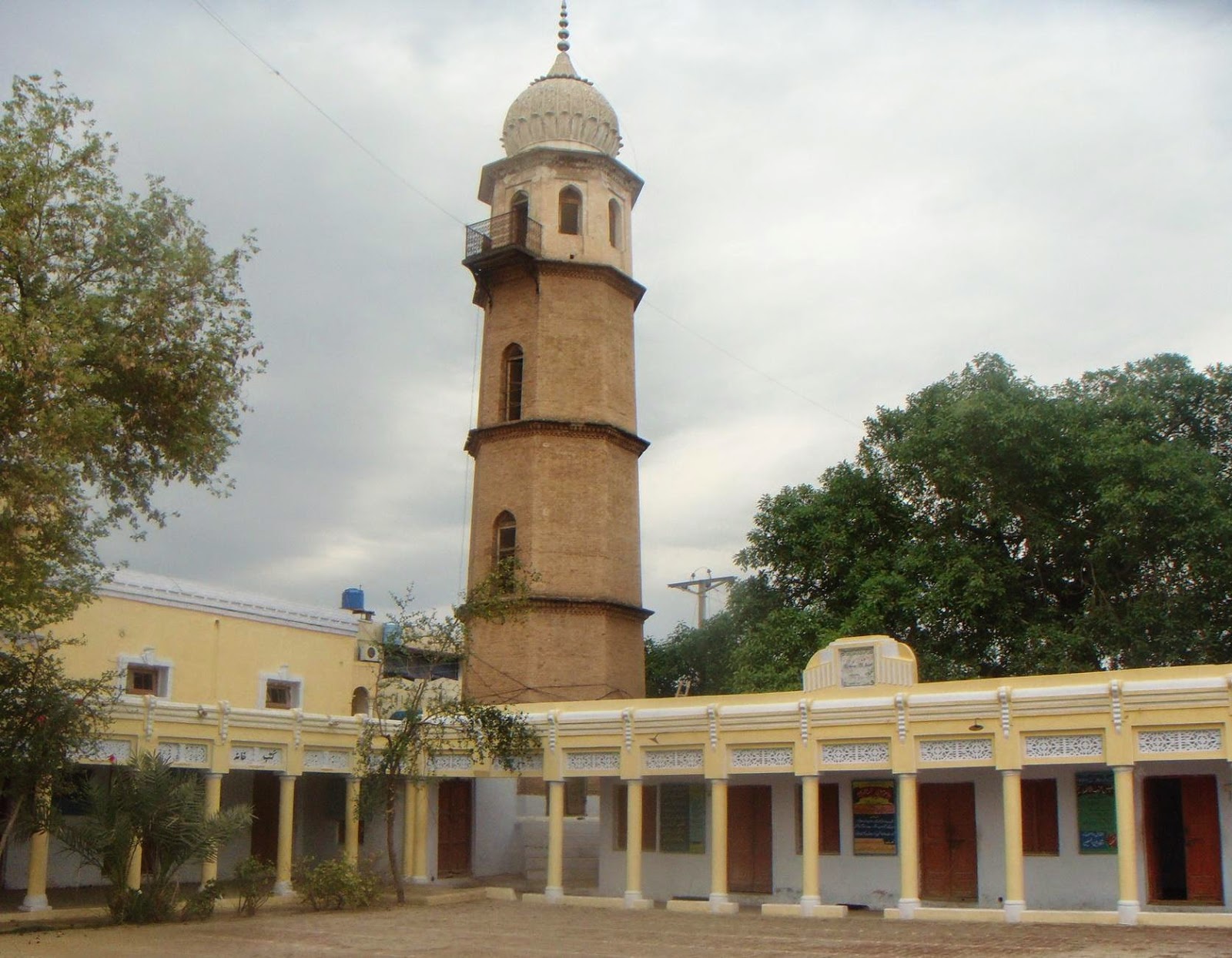 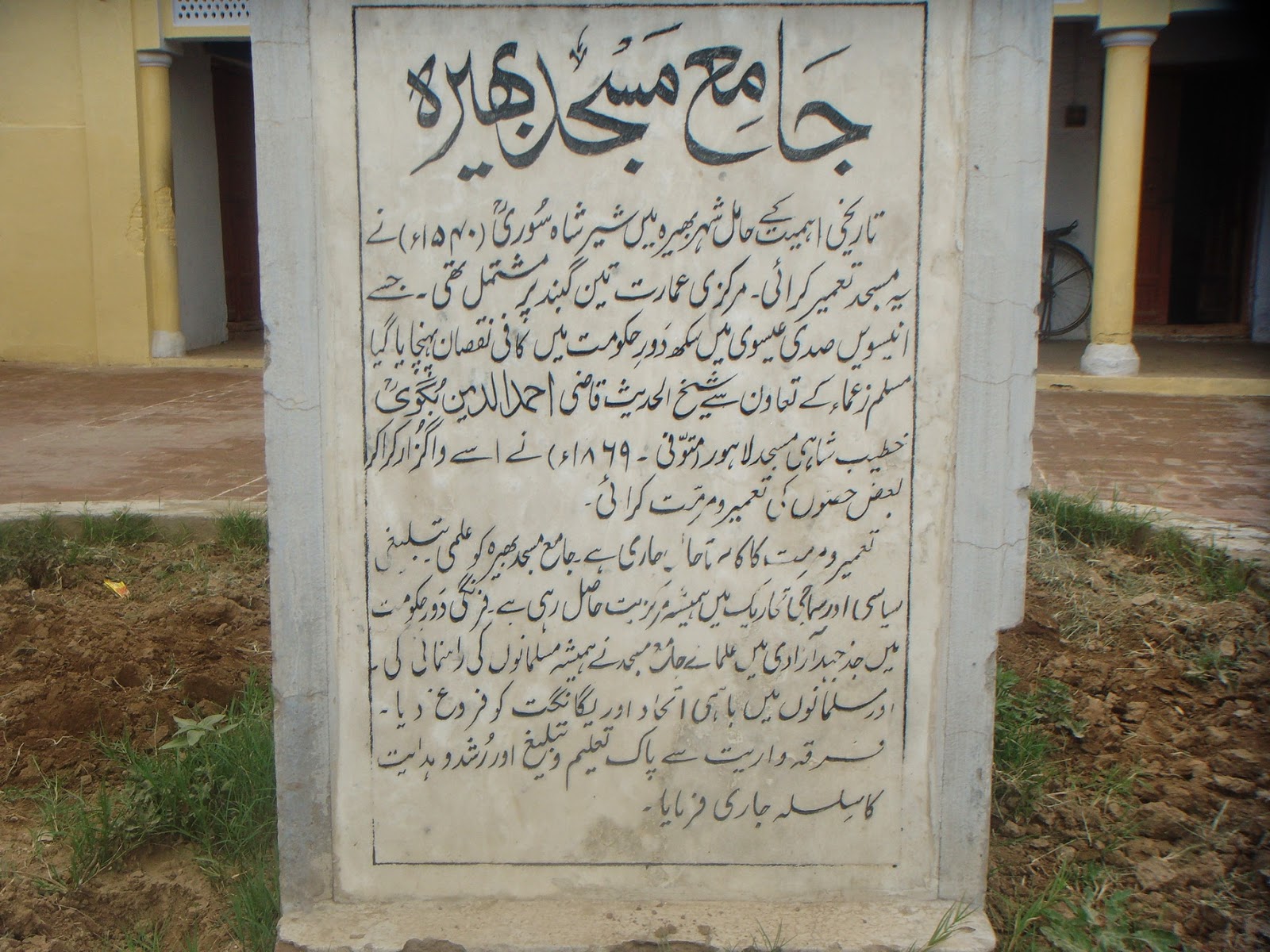 Jame Mosque Bhera
Sher Shah Suri got constructed this mosque in 1540 AD, in historically important city of Bhera. Which was considerably damaged in 19th century, during the Sikh rule. Sheikh Al Hadith Qazi Ahmad ud Din Bugvi, Khatib of Shahi Mosque Lahore (died 1869), got it vacated with the cooperation of Muslim notables and constructed or repaired some parts.
The work on construction and repair is still in progress. The Bhera mosque always has had a central position in educational, missionary, political and social movements. During the rule of British, the ulema of the mosque always guided the Muslims in their struggle for freedom, and spread unity and harmony among Muslims. Continued work of education, righteousness and guidance, free of sectarianism. 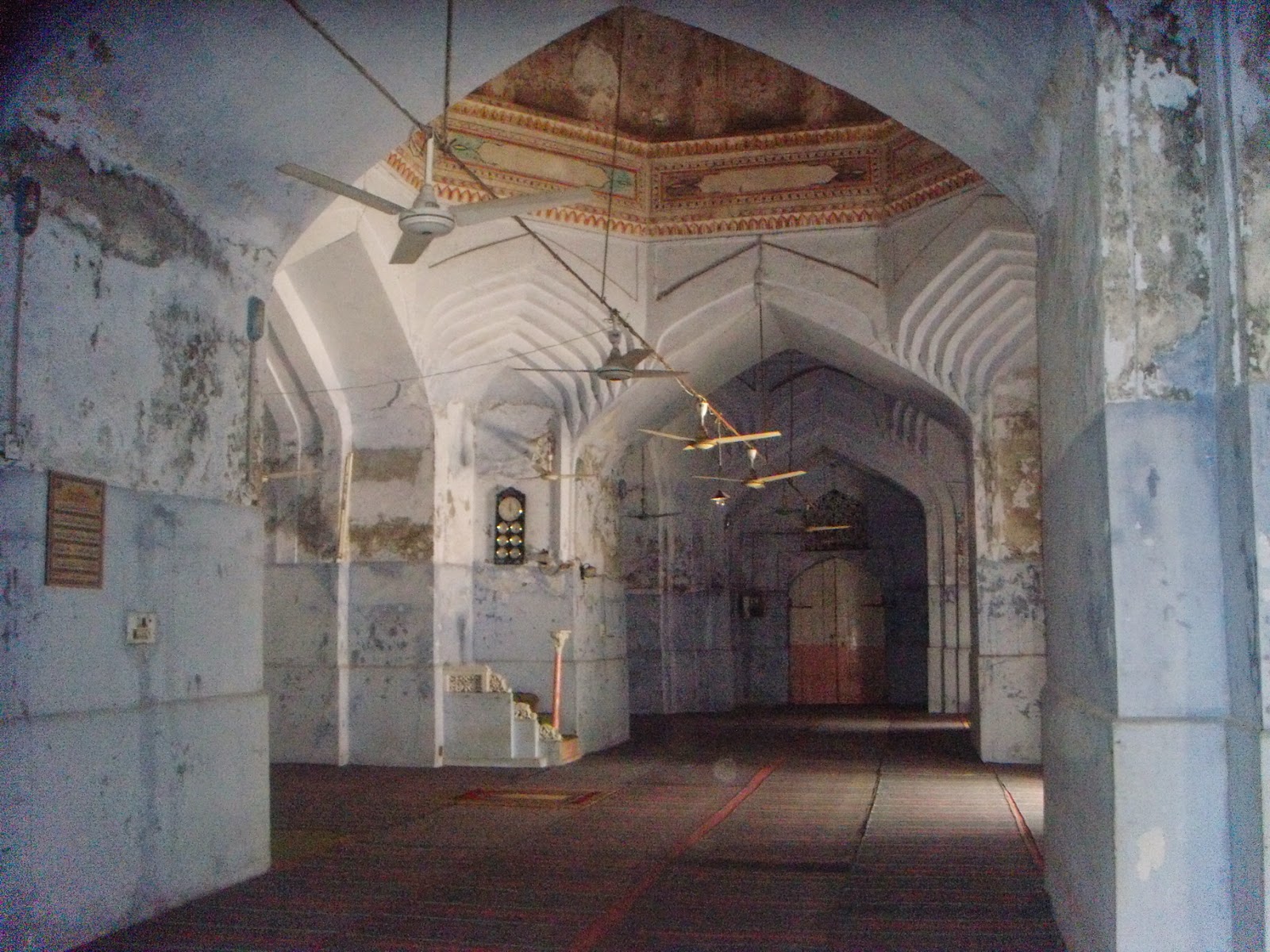 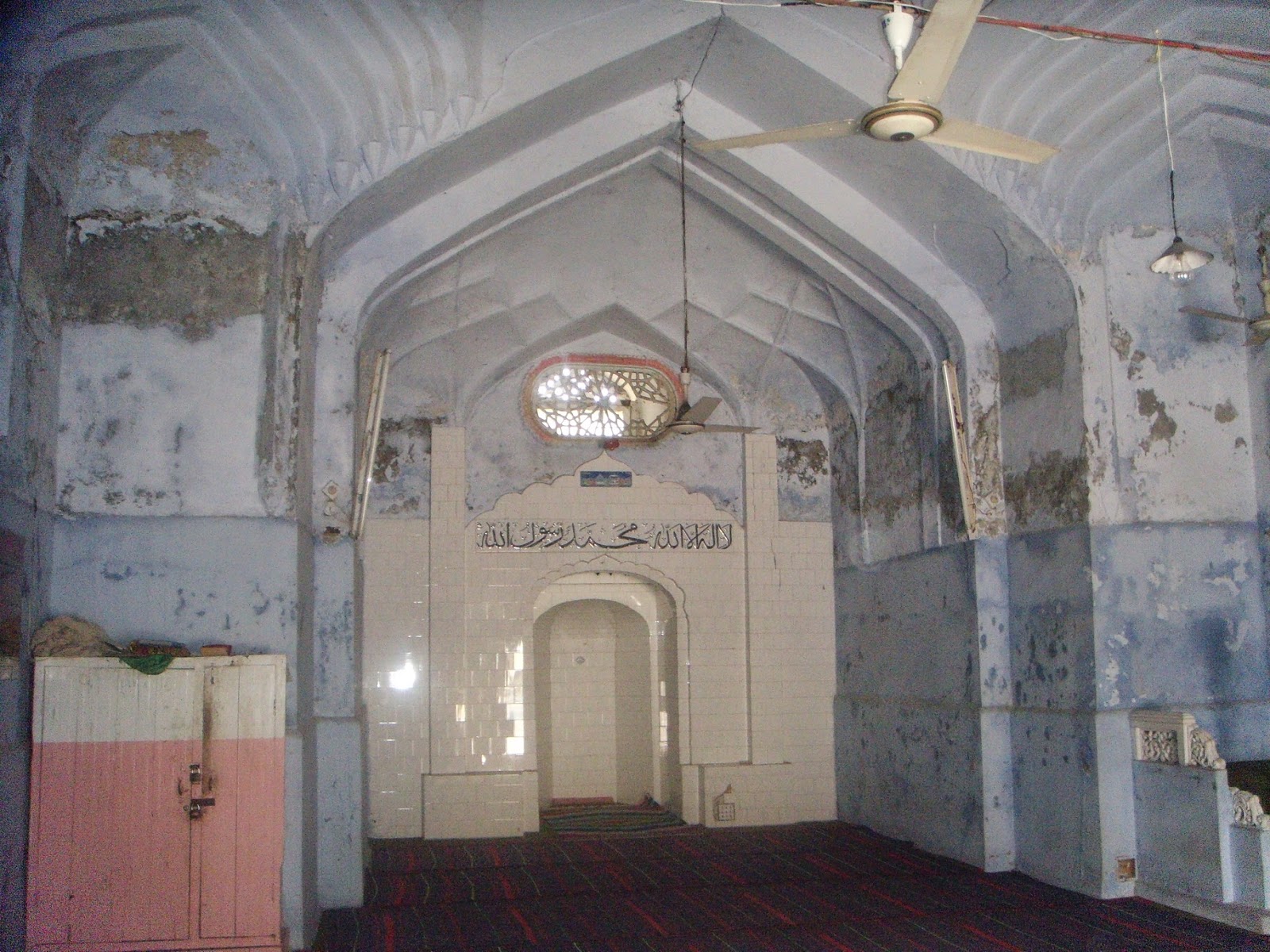 Of all the historical buildings, the mosque of Sher Shah Suri is the most magnificent and luckily the best preserved. Other main attractions in Bhera in this regard are its eight gates, which are Lahori, Chinioti, Multani, Kashmiri, Kabuli, Peeran Wala, Loharan Wala and Haji Gulab. 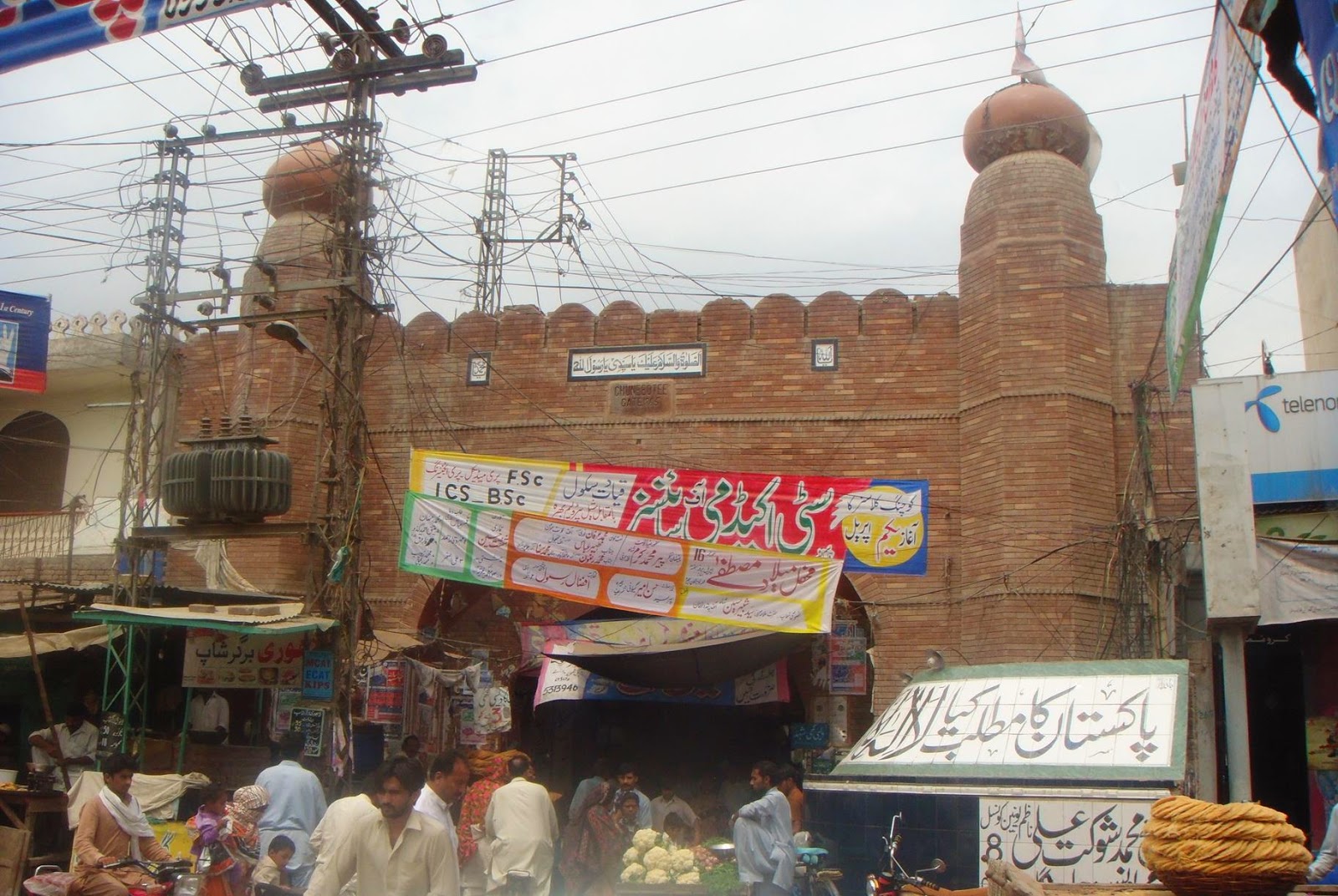 Multani Gate. I hope you will get a glimpse behind the our national curse of banners and advertising boards.
(09.04.2011.) 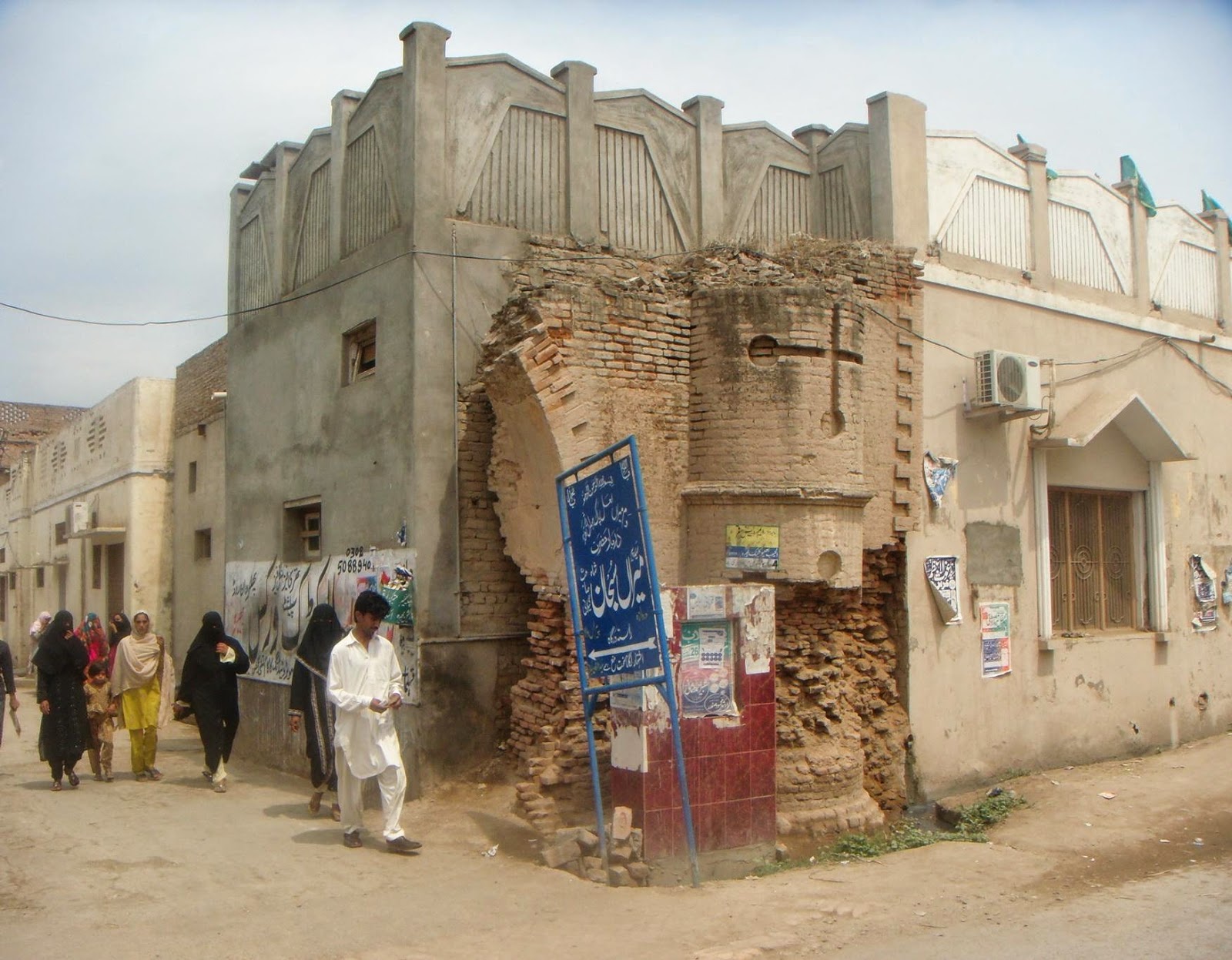 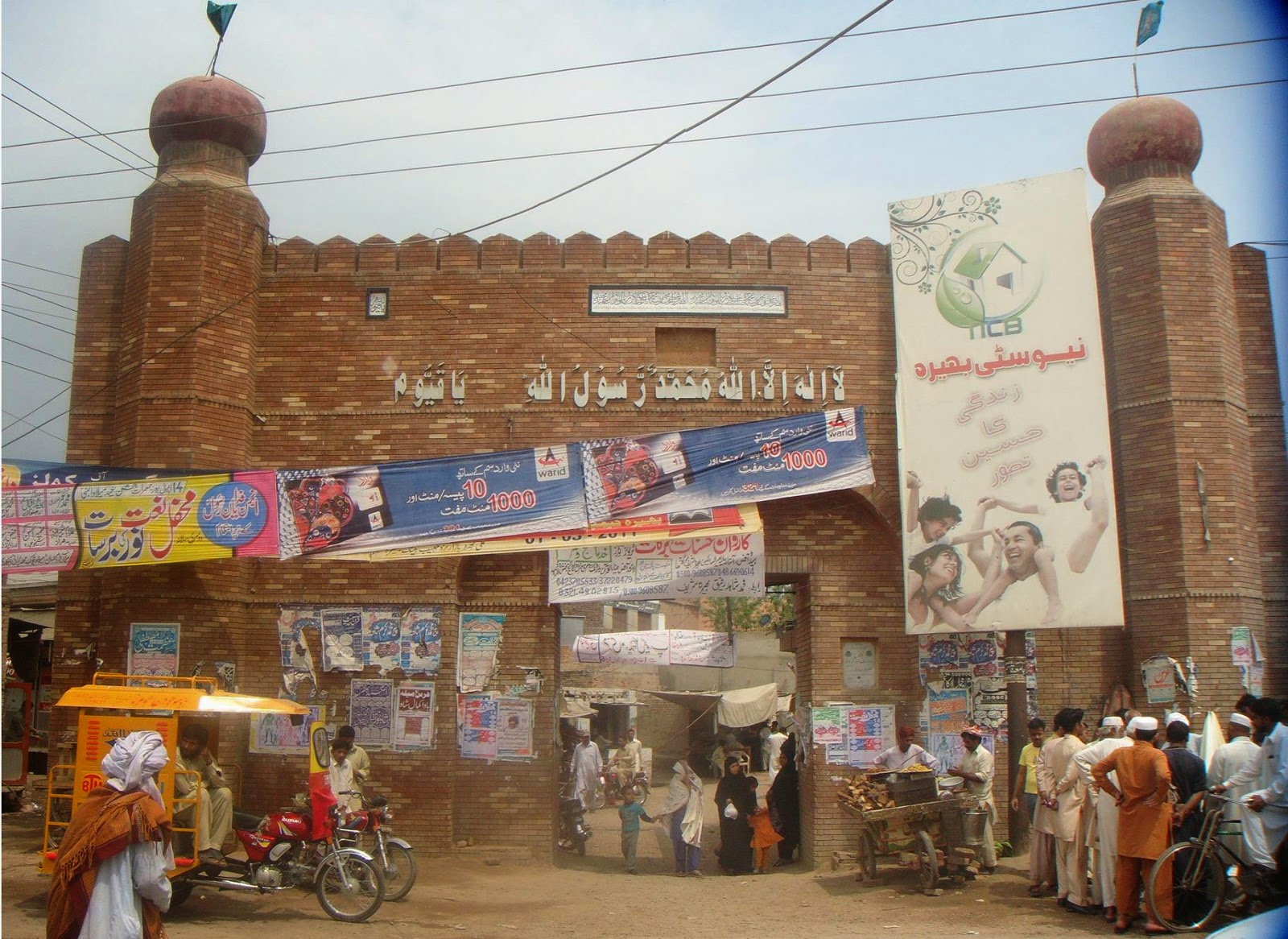 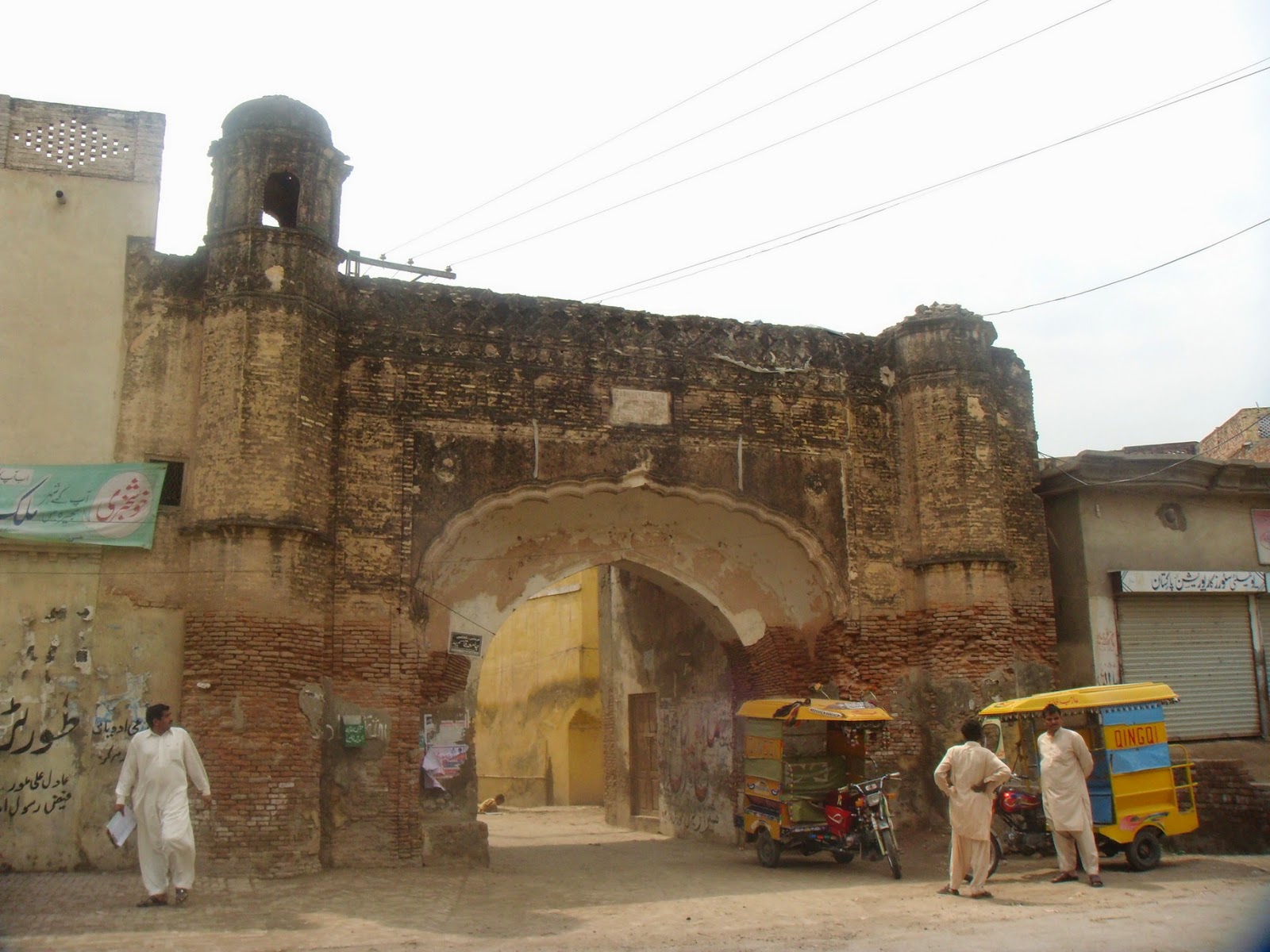 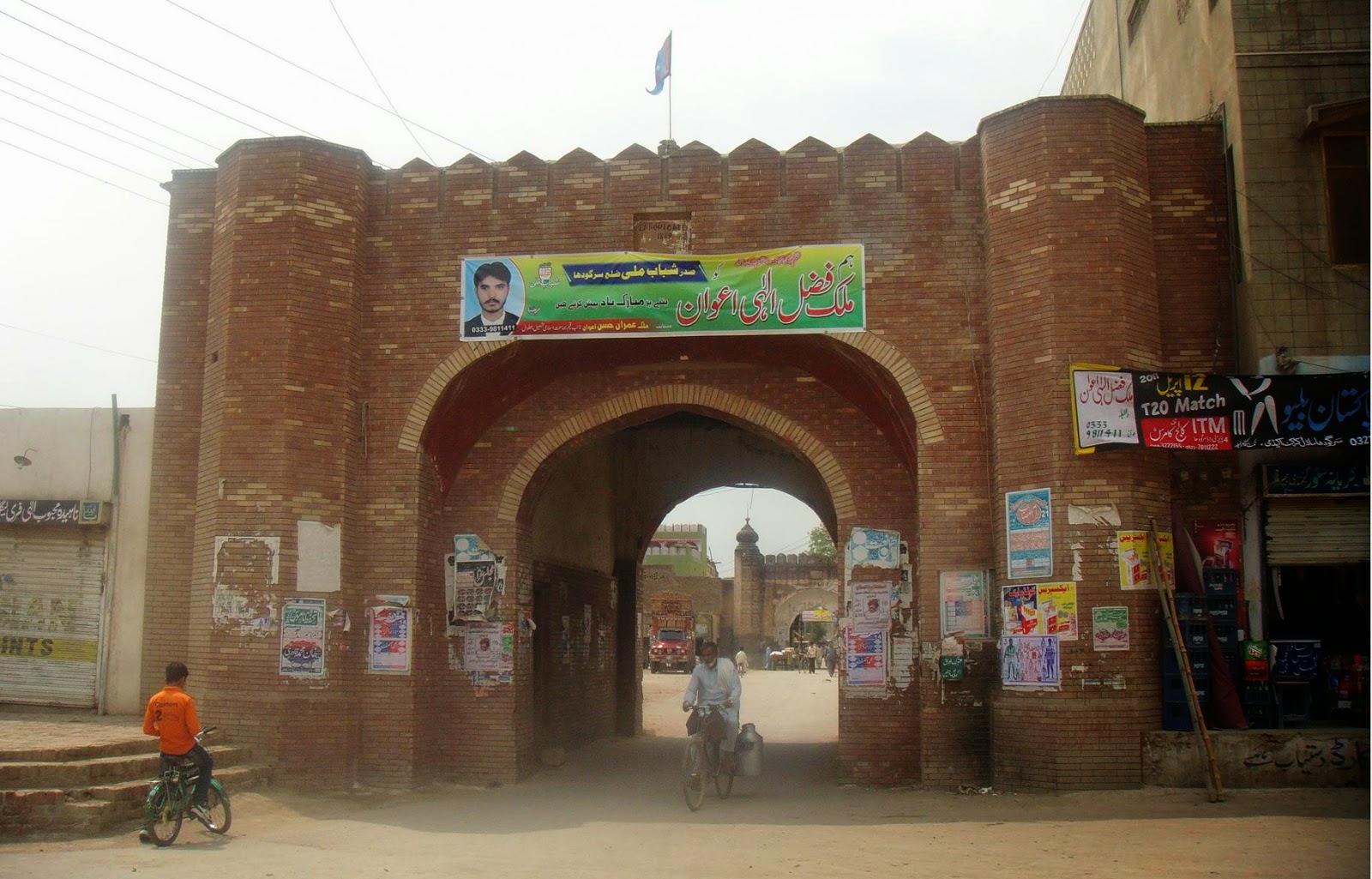 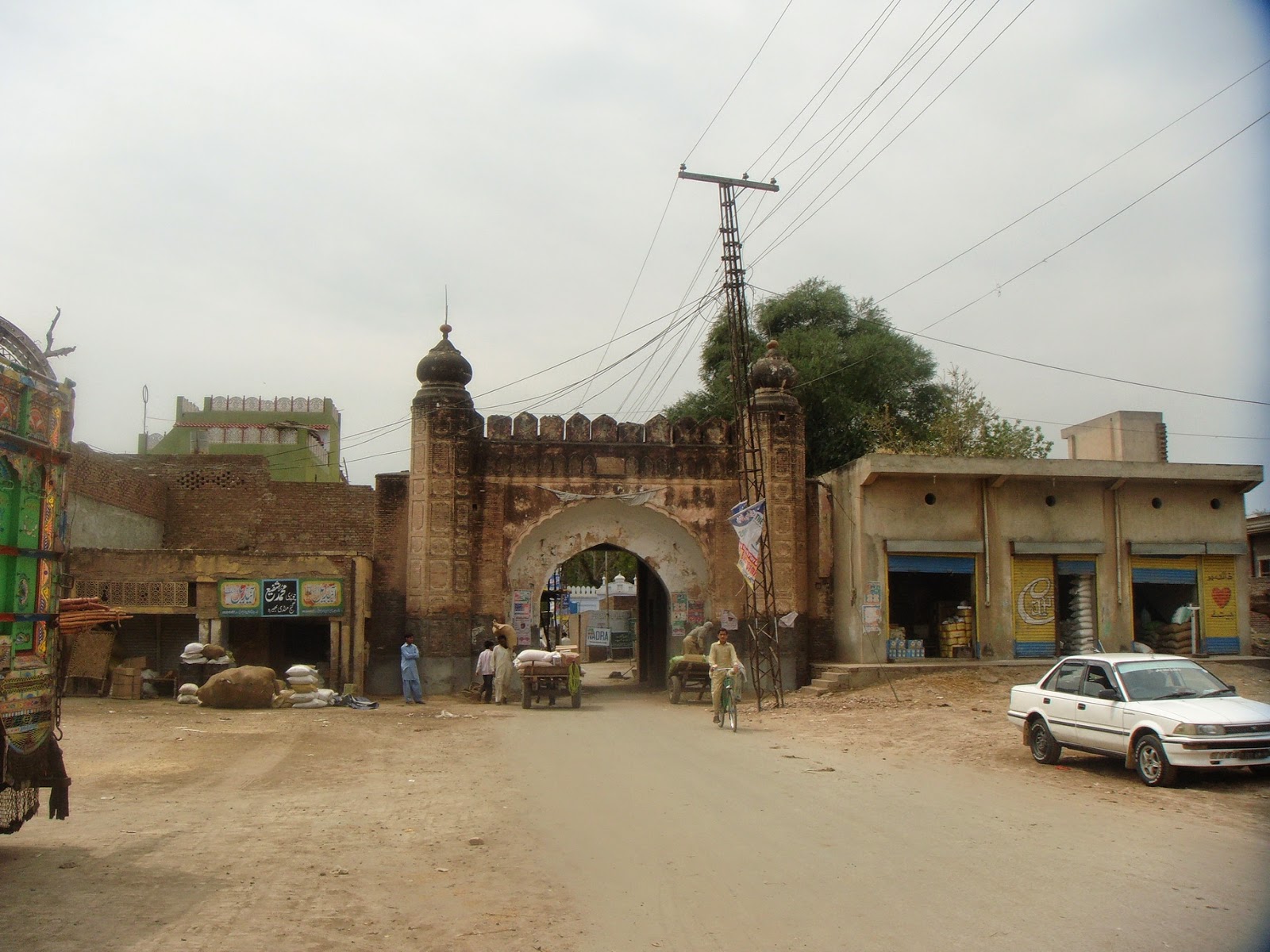 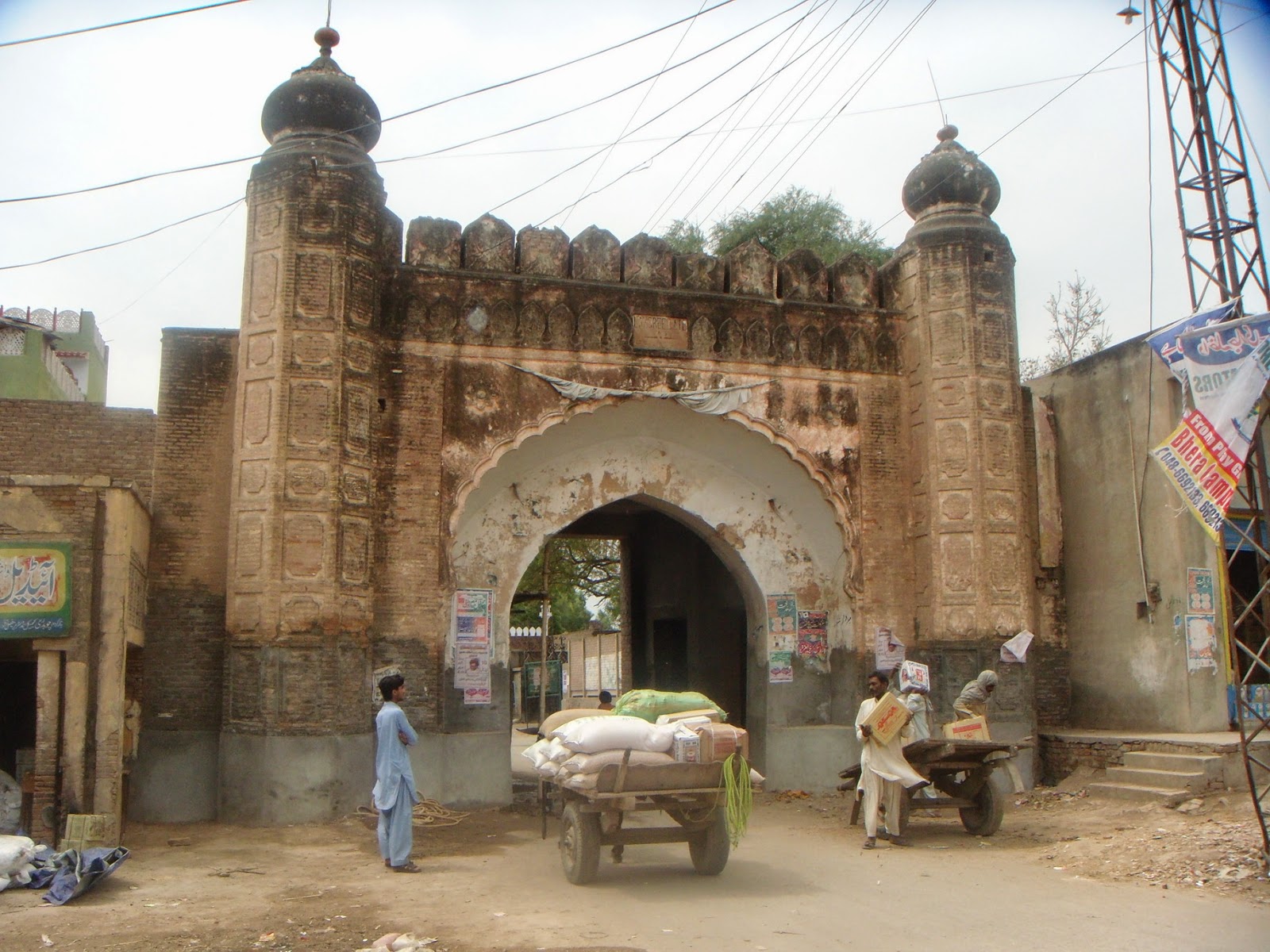 Bhera is a treasure trove of old traditional buildings. Its old architecture and style is like that of old Lahore and Peshawar. Bhera was always a centre of trade, art and craft. It was famous for weapons manufacturing and wood works. Before independence a large part of the population of Bhera were Hindus and Sikhs. According to the census of 1941, the total population was 20,219, out of this 21.7 % were Hindus and 1.66% were Sikhs. Hindus were mostly prosperous traders and built beautiful and large houses. Bhera was home to many prominent Khatri clans. Bhera city is replete with old traditional havelis built by Muslims, Hinuds and Sikhs. Besides Sher Shah Suri mosque, there are many other historical mosques and temples and gurdwaras as well. Here are a few pictures of a few old houses. 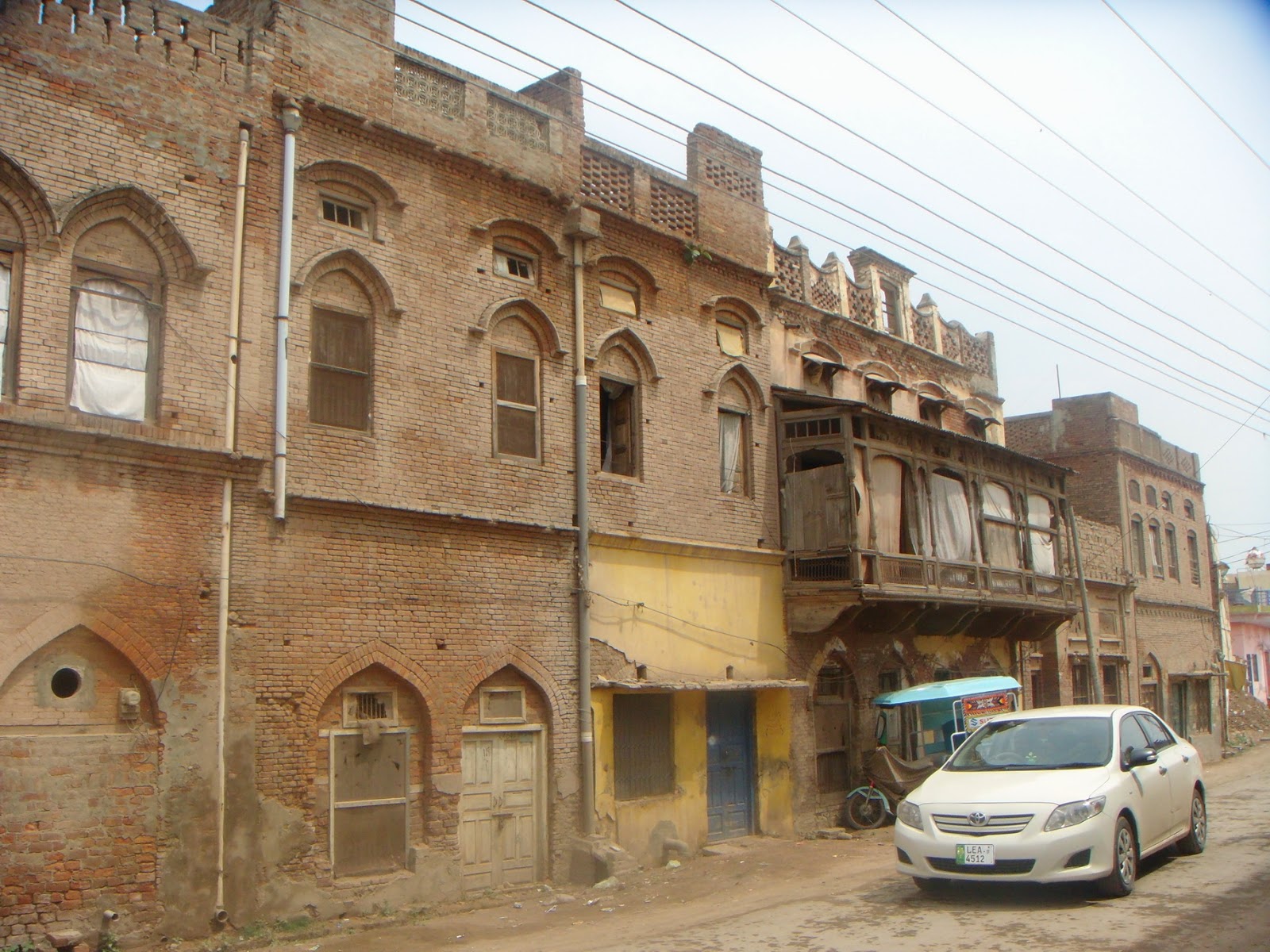 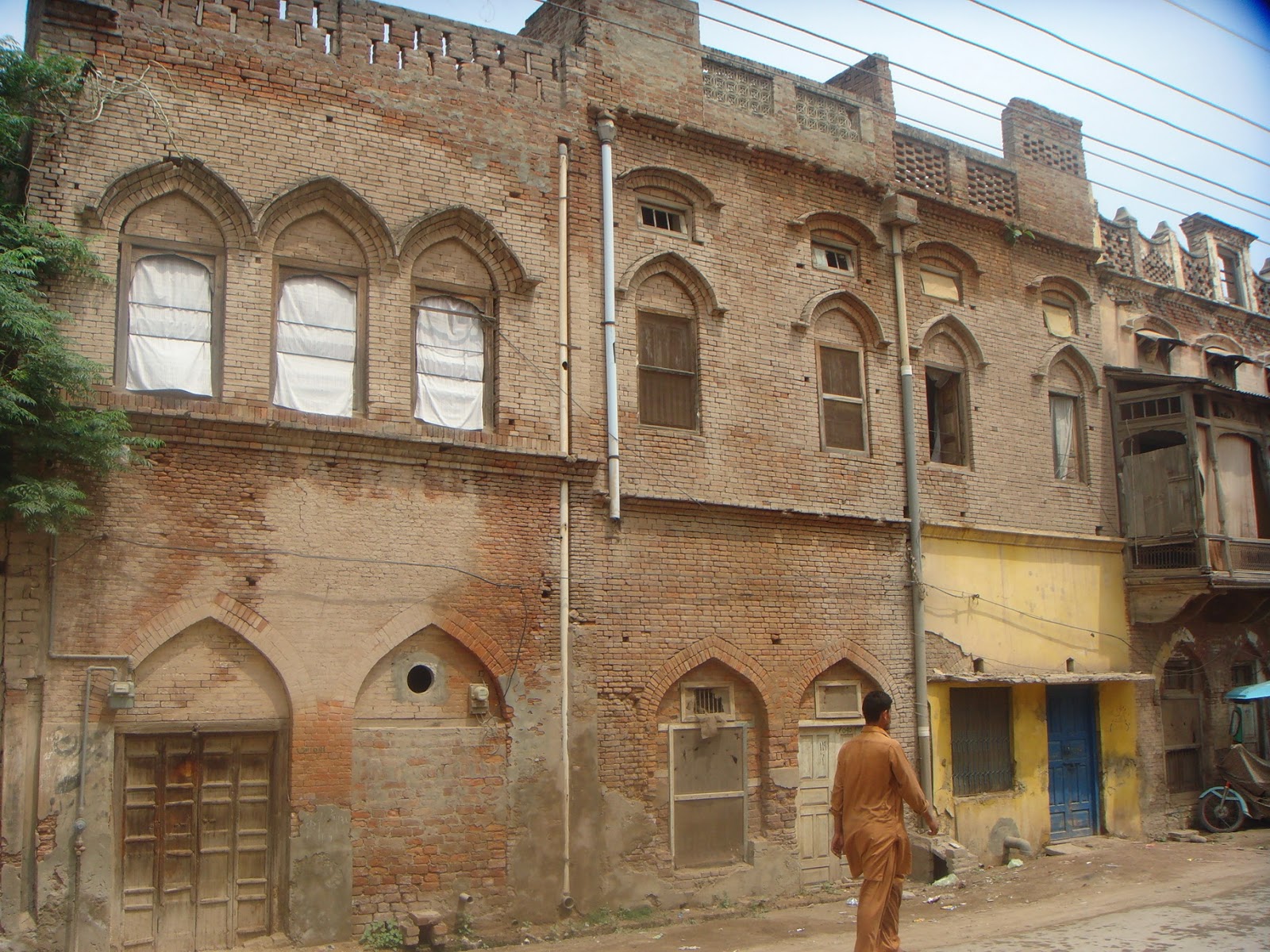 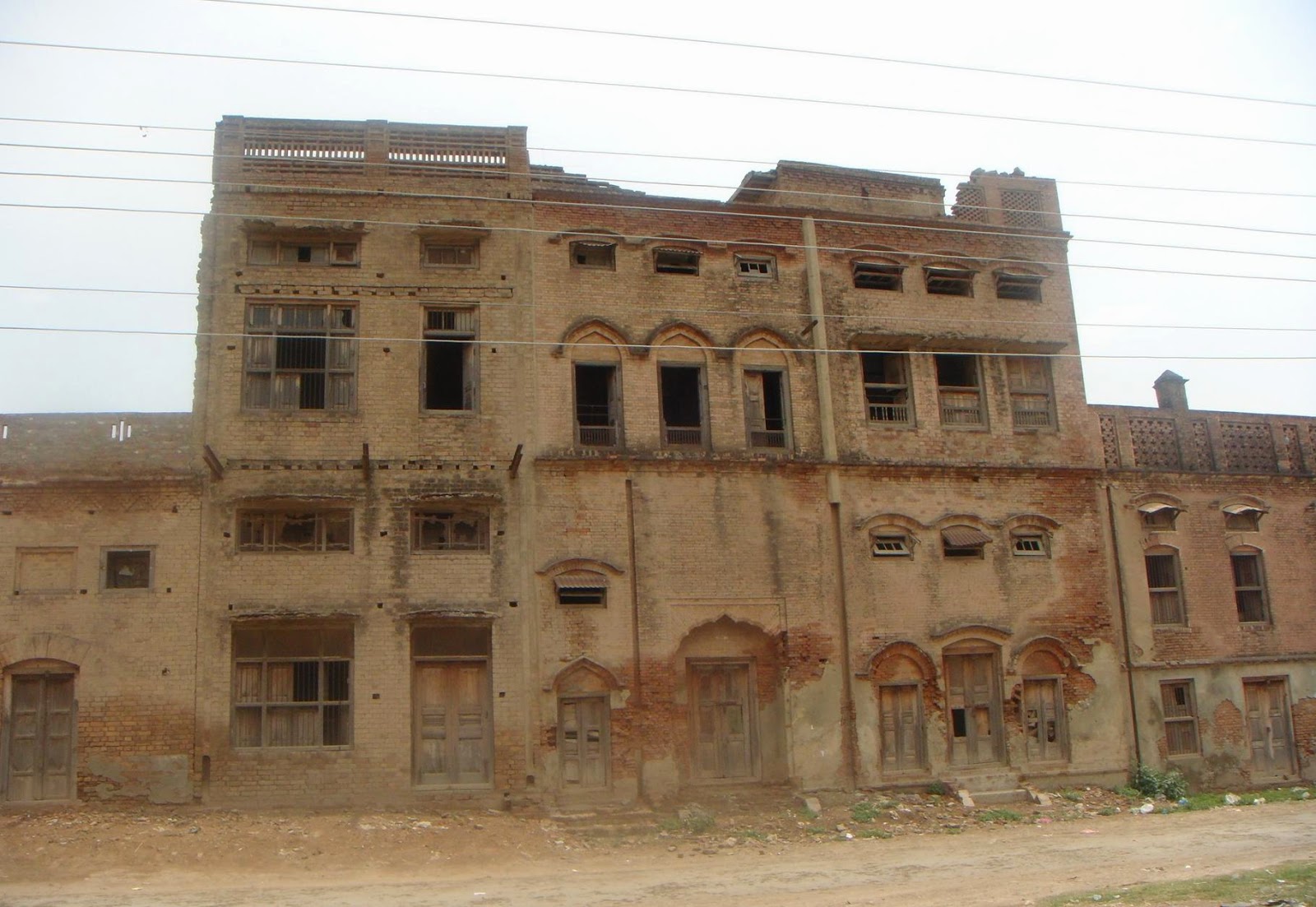 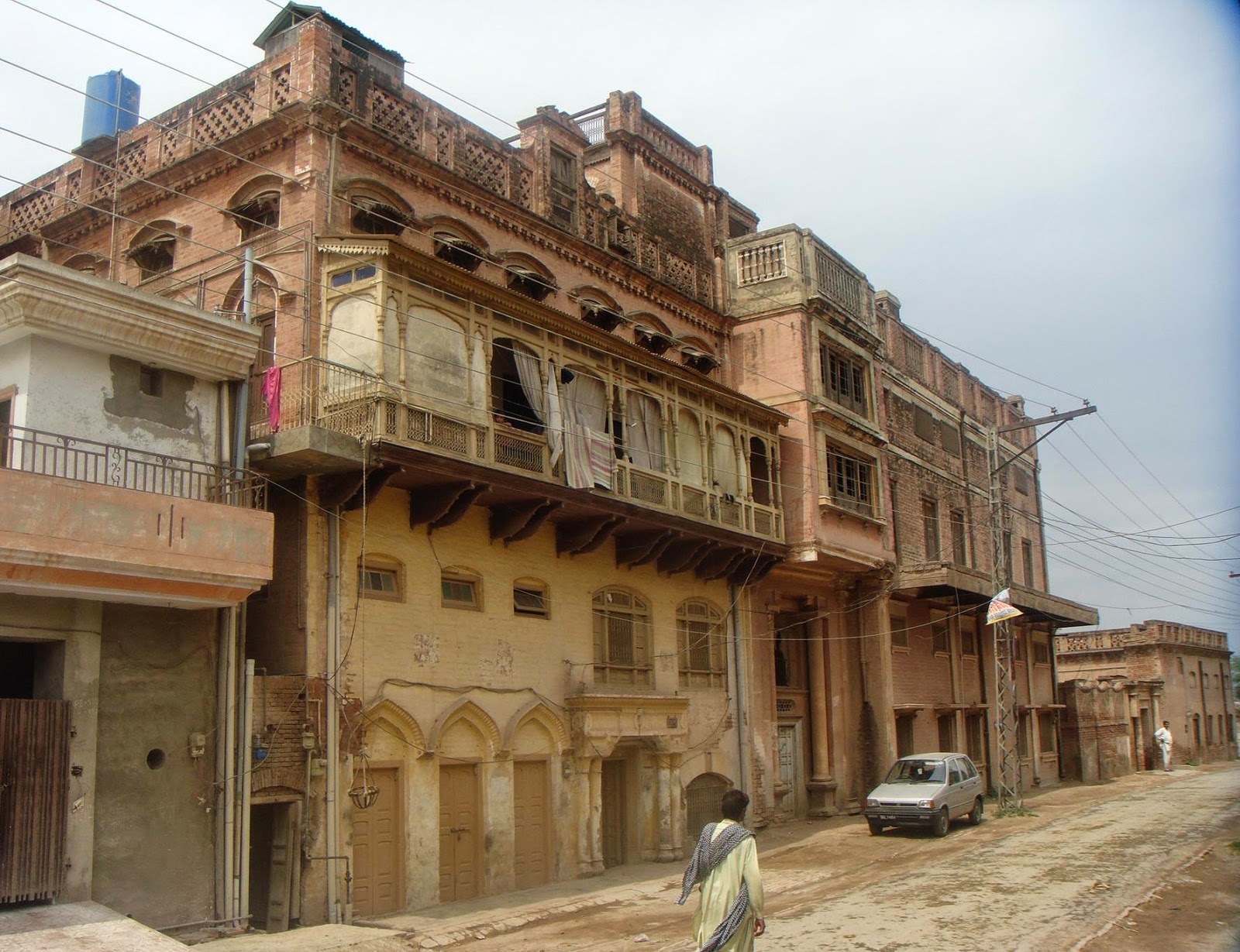 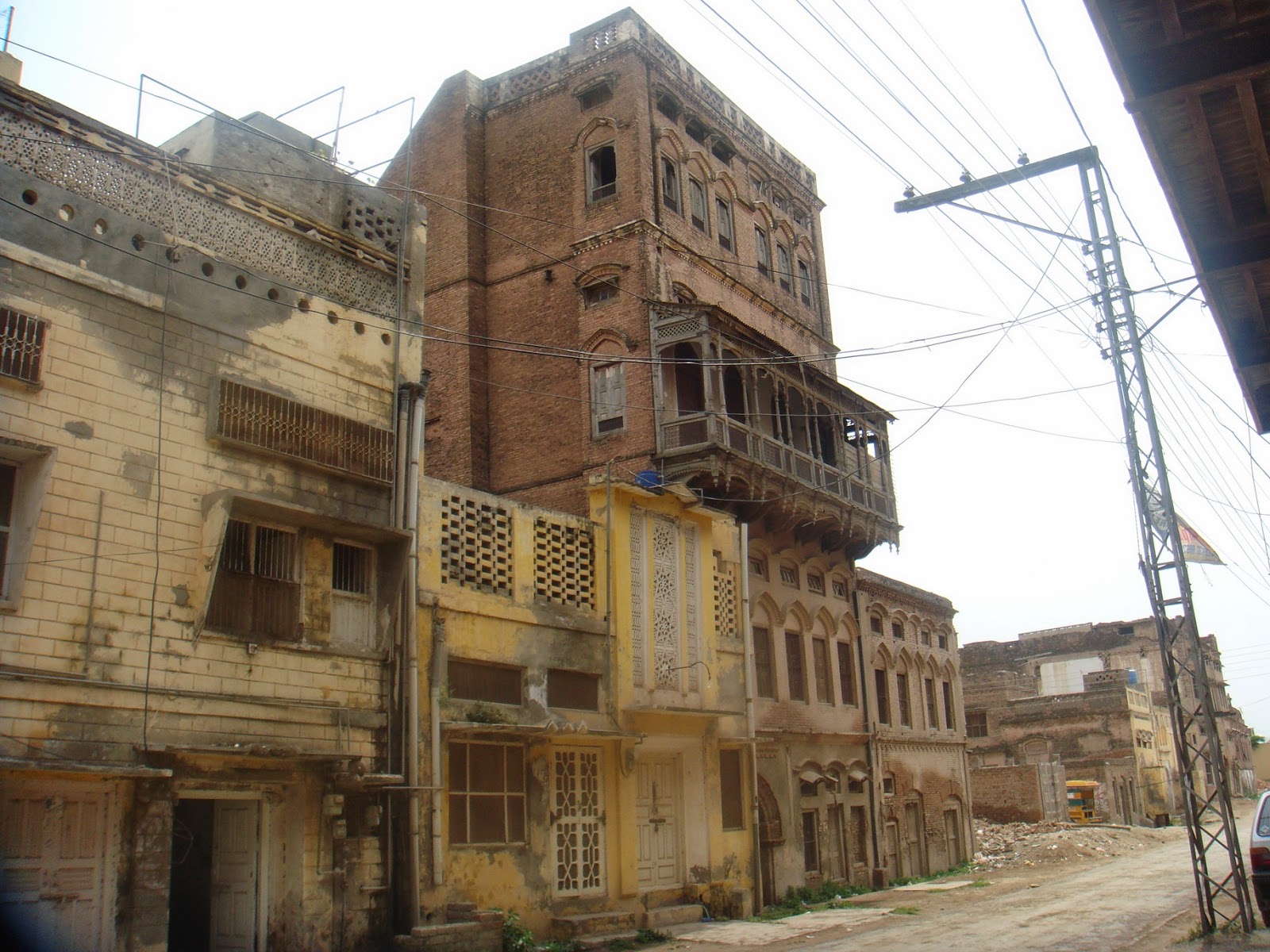 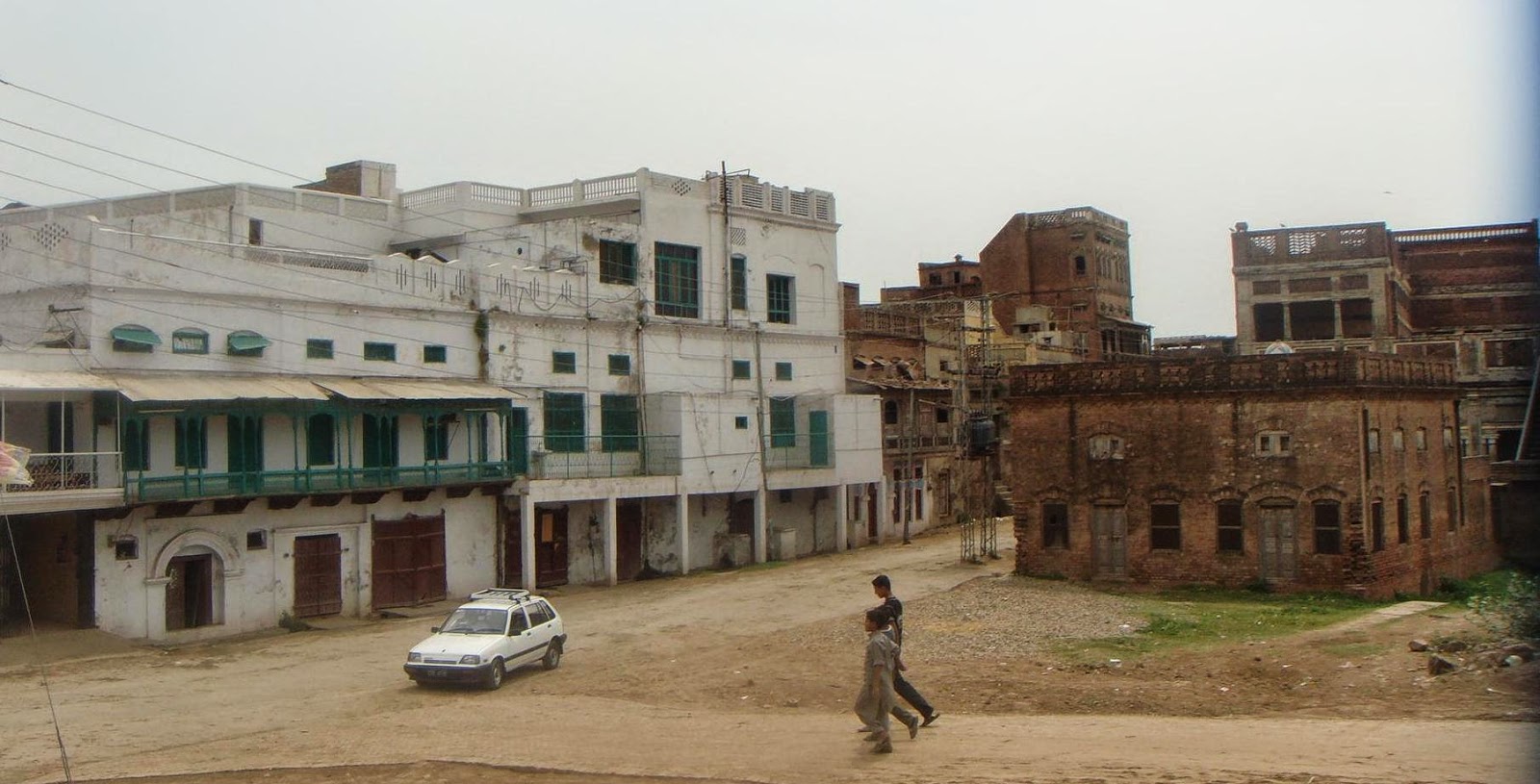 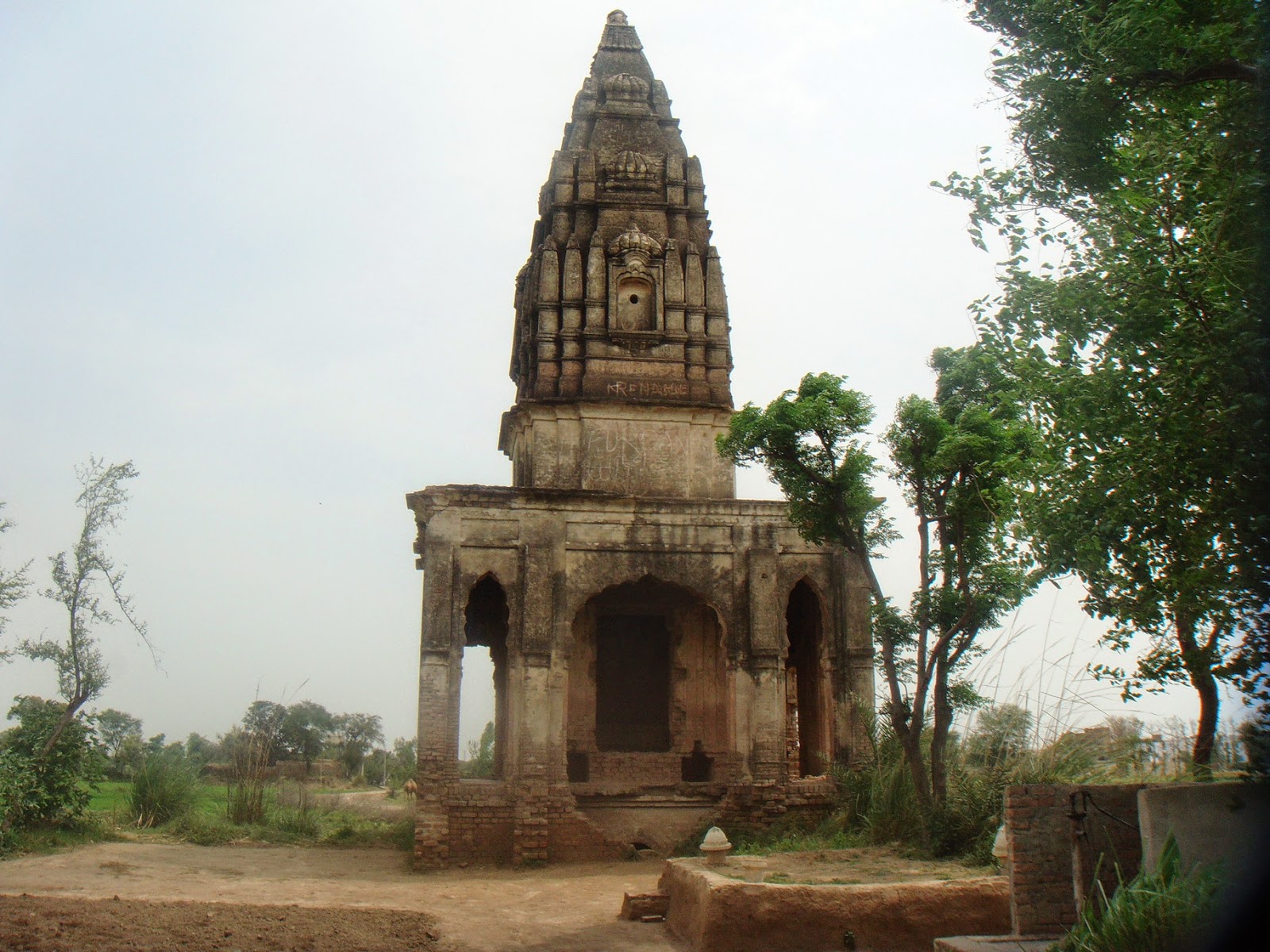 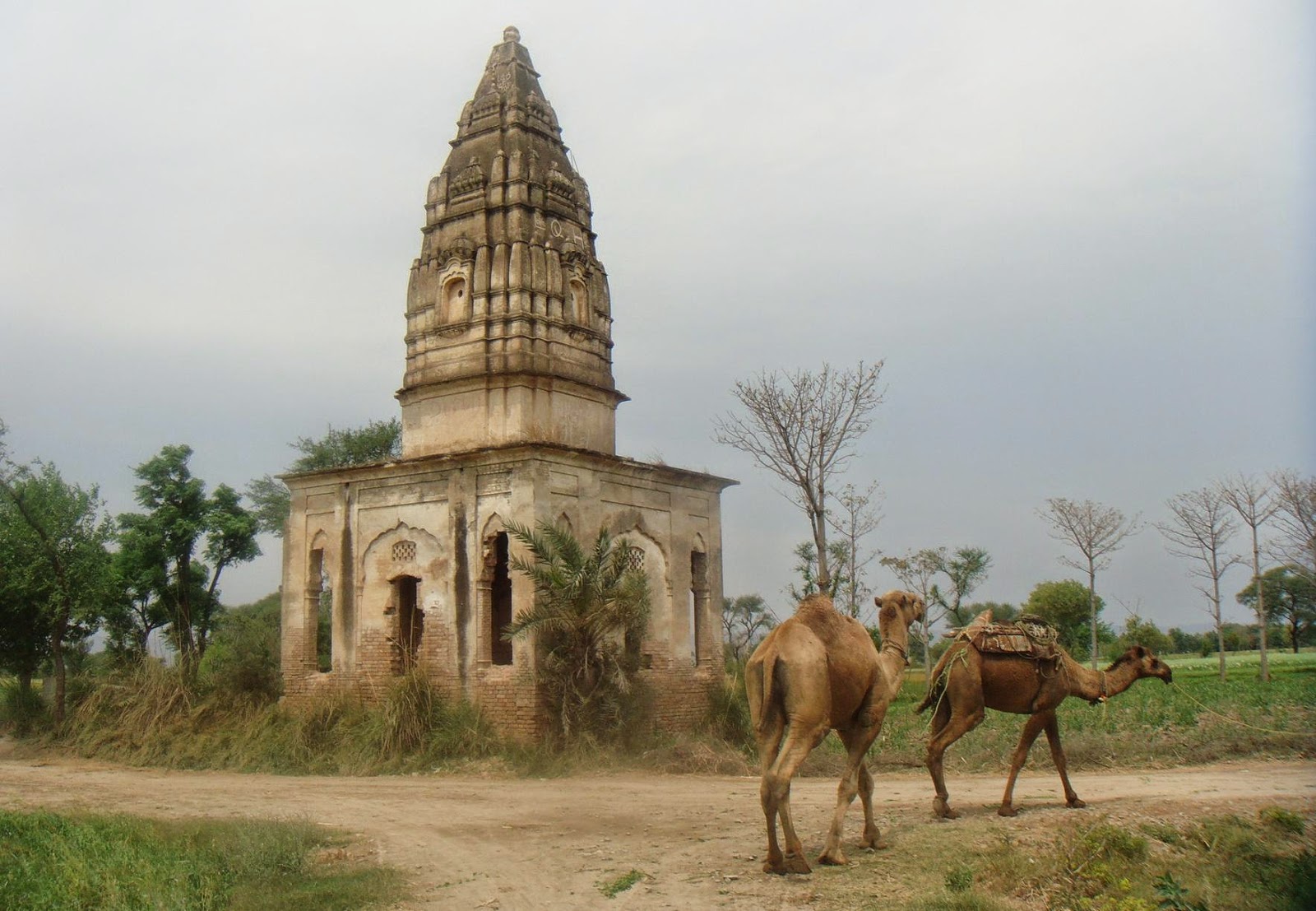 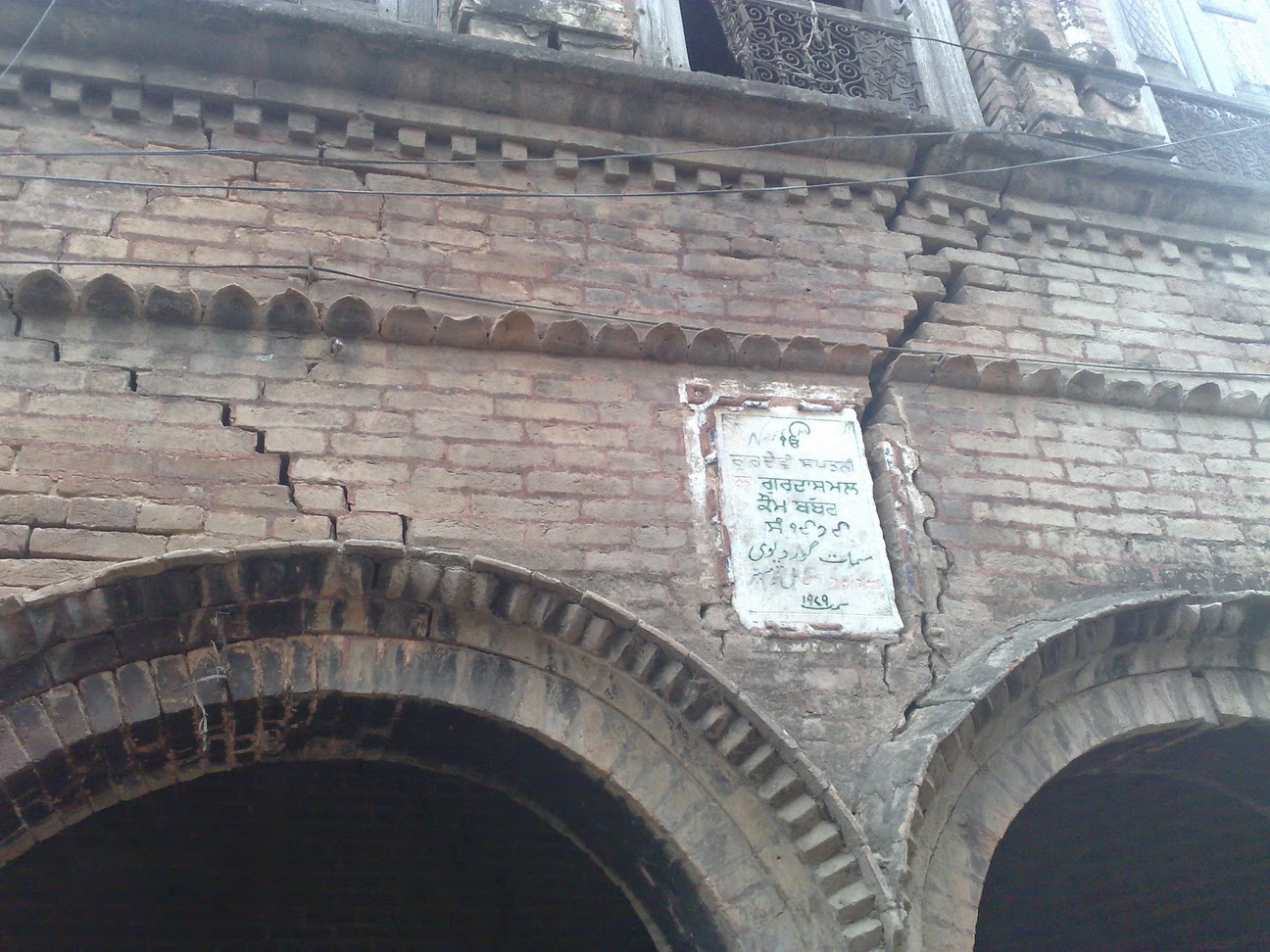 An old house, once belonged to a Sikh lady Gur Devi. The corresponding year is 1922 AD. 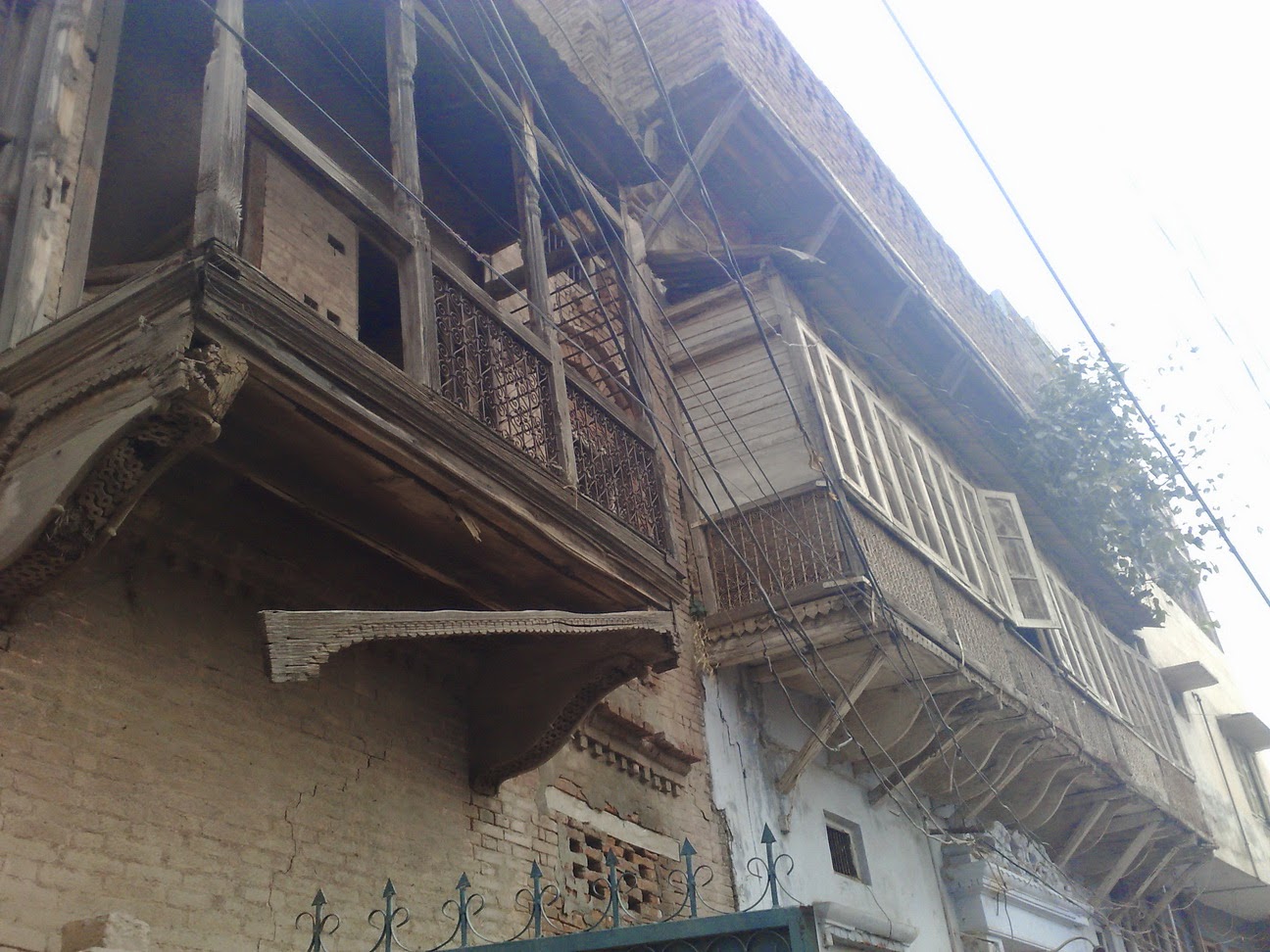 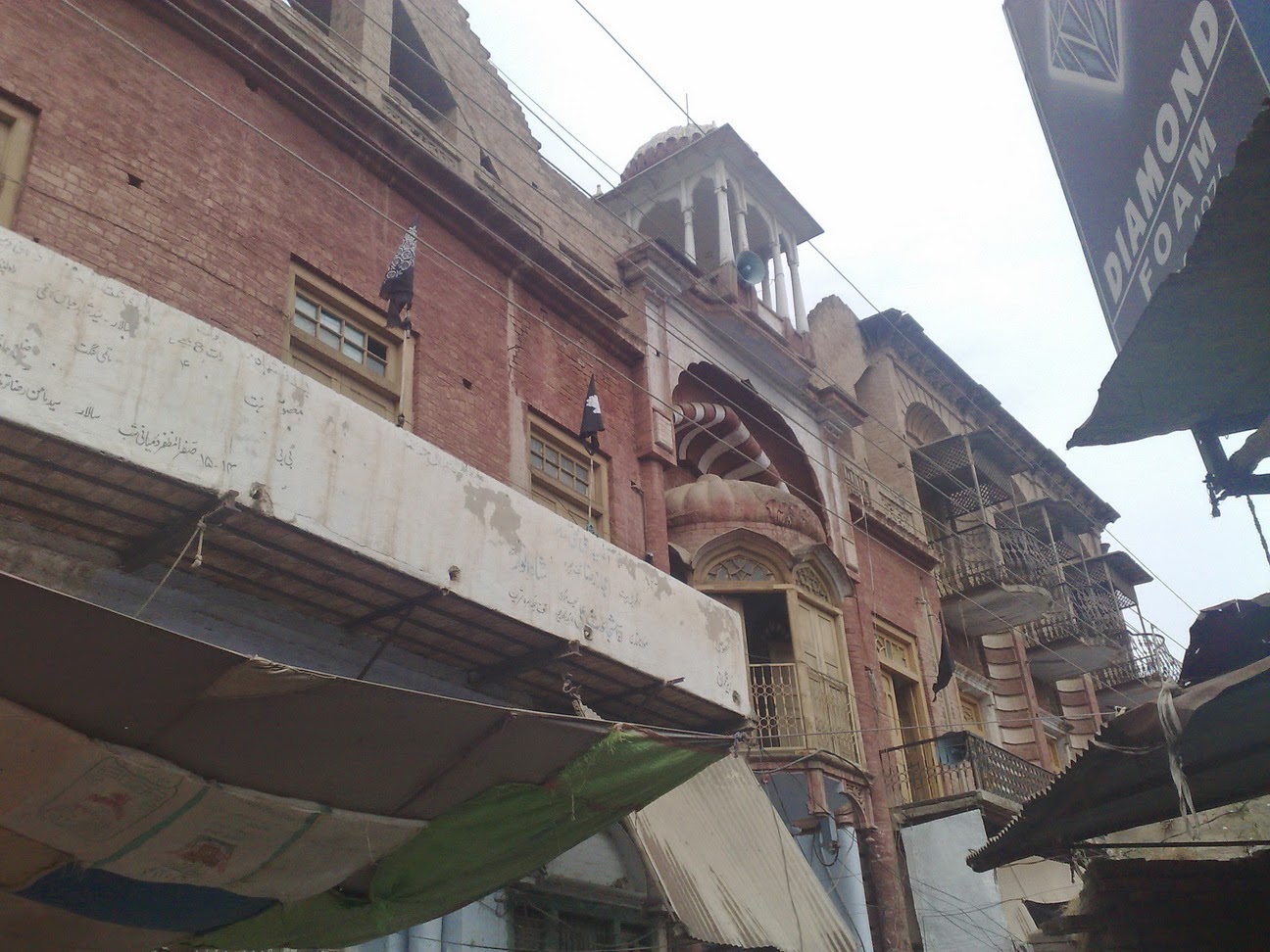 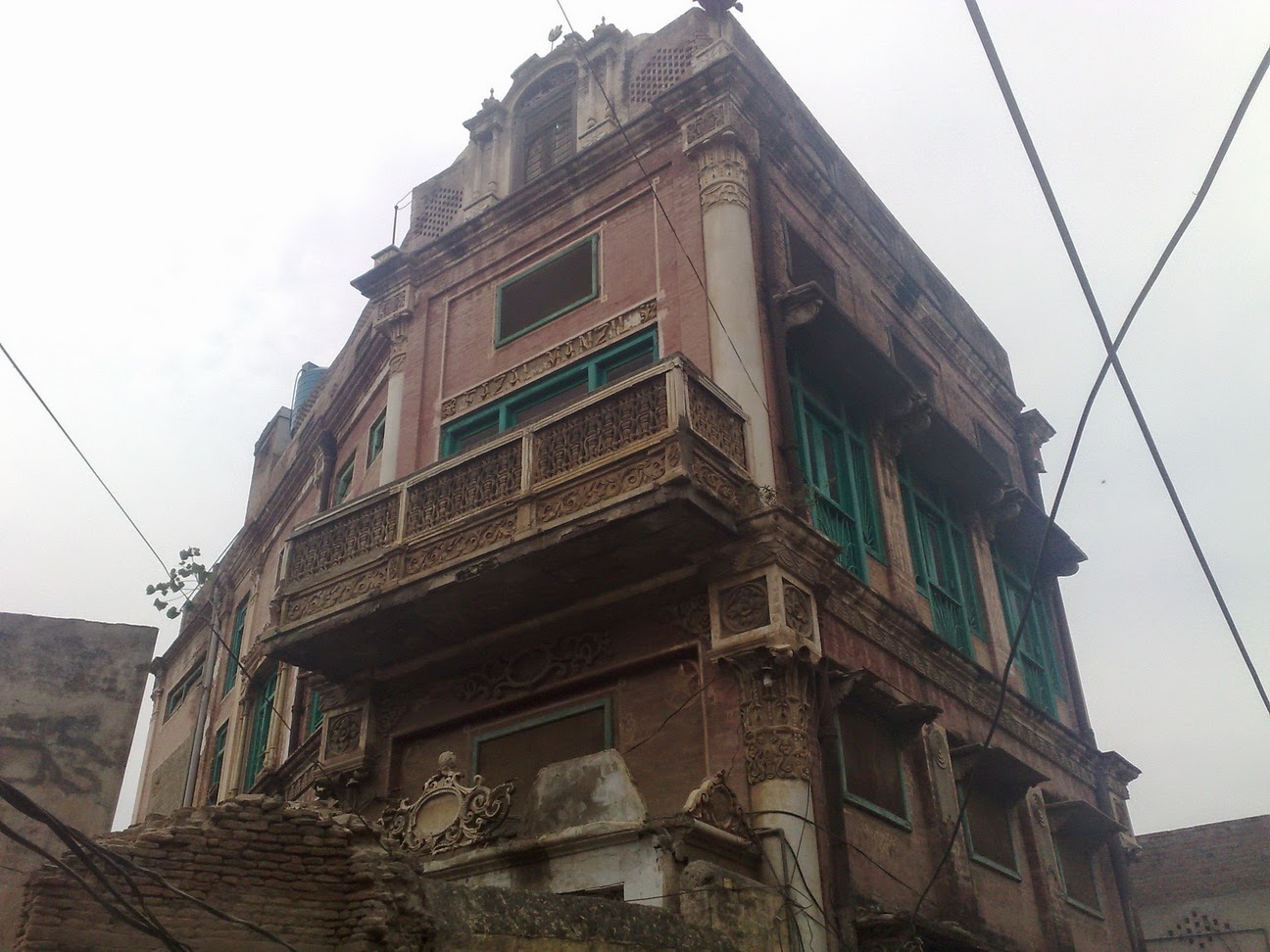 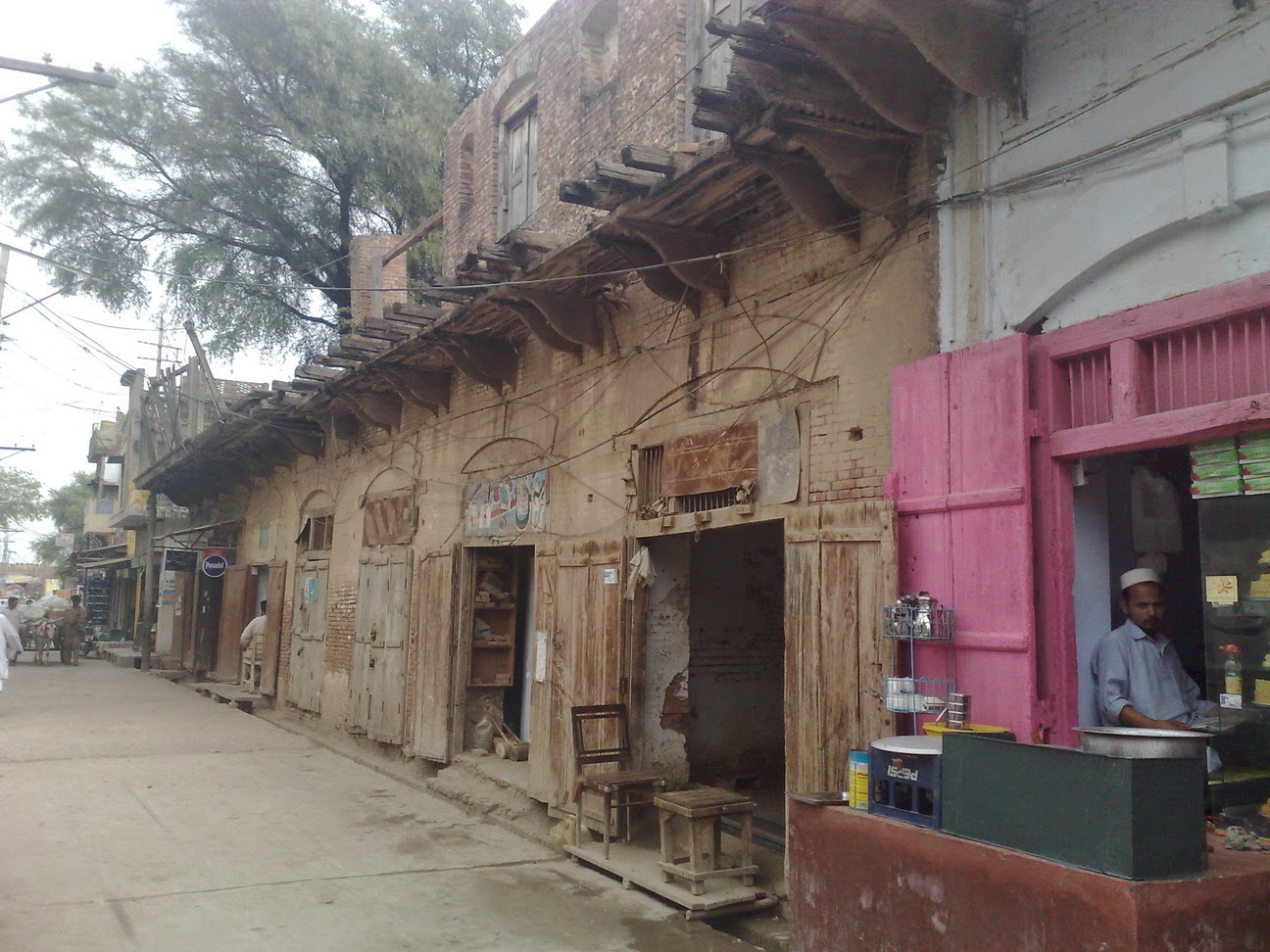 At the end I must inform you that the above pictures and details, is not even a fraction of what could be found in Bhera. It is no ordinary city, it is museum and it needs a massive scholarly exercise on part of a big team of experts, just to collect and document all the information about the history and architecture of Bhera. I appeal to our provincial and federal governments to do something before it is too late. But we all should realize the importance of this fast vanishing cultural treasure and put our efforts to save it. Bhera is very easy to reach, as it is located just 3.5 kms away from the Bhera Interchage on M2.

A the end I want to say that I shall appreciate your comments and your suggestions to improve this blog. Any additional information is most welcome and will be used with due credit to the contributor.